BUNKERSâ€ˆtend to be one of the most controversial aspects of a golf
course, and superintendents often find themselves on the receiving end
of complaints among golfers who claim they’re unfair as well as
concerns from their own maintenance workers who find their upkeep to be
a never-ending battle.

Robert Randquist, superintendent at Boca Raton, Fla.’s Boca Rio Golf
Club, said bunkers can be “a lightning rod” for criticism. Speaking in
March at the Canadian International Turfgrass Conference and Trade Show
in Halifax, the veteran superintendent said every one of his colleagues
has, at one time or another, fielded from his members the question,
“When are we going to do something about our bunkers?” 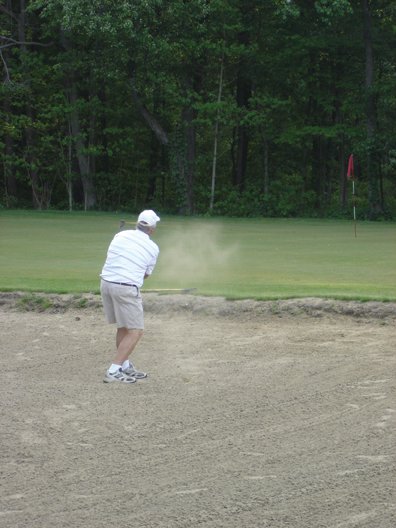 Superintendents will ultimately face one of three scenarios with regard
to their bunkers, Randquist said, depending on whether they have
deteriorated over time, they no longer reflect the architect’s original
design or are deemed unfair by the club’s membership. The bunkers can
either be redesigned, restored or reconditioned.
First and foremost, a superintendent must have a clear picture of what
the course owner or membership wishes to accomplish, he said, adding a
significant difference in cost and method exists for each scenario.

“If you go into a bunker project and you think you’re just going to
recondition them, redo the surfaces and put new sand in, replace the
drainage, and you’ve got a rough idea of what the costs will be, and
all of a sudden it turns into a redesign project, the costs can
escalate very rapidly.”

For a redesign project, the impetus is often the difficulty in maintaining the bunkers in their current state or, from a player’s perspective, shotmaking is far too difficult or even unfair.

Such design aspects as high facings can cost golf clubs a lot of money, Randquist said. A significant rainfall can wash the sand downward, requiring intensive amounts of labour to repair the damage.

“Most architects do the best they can to prevent these types of situations, but inevitably we find ourselves faced with a few of these.”

Although they offer plenty of aesthetic appeal, high-faced bunkers are often condemned by female golfers, older players and high handicappers who usually fail in their efforts to successfully escape the sand. Randquist said these groups of golfers frequently complain that they are paying good money to play a game they should be enjoying, yet find themselves becoming increasingly frustrated by a penalizing design aspect.

When these types of complaints begin to multiply, course owners tend to consider a redesign of their bunkers.
“Sometimes, architects get really carried away,” said Randquist, who compared them to painters who have an appreciation for their artistic freedom. “There’s nothing illegal or against the rules for doing things like this, yet it does create a challenge from a maintenance or player’s standpoint.”

Randquist said he considers himself a “decent” student of golf course architecture, and he believes it’s best to deal with an architect for a major redesign project.

“If I’m going to do a major redesign project with bunkers on a golf course, I’m going to encourage my employers to hire a qualified, competent golf course architect. The reason is, no matter how much knowledge Iâ€ˆthink Iâ€ˆmay have, I don’t want to be caught in that political position of being the person ultimately responsible for that design. That might sound like a selfish motive, but I really think that it’s very important that we try to get our employers to hire a competent golf course architect. No matter how much I think I know, they have a better understanding of the architecture of the game and the impact it has on the playability on our golf courses.”

Randquist added the golf course’s membership, board or owners must take into account the full impact a design change in bunkers will have in not only playability but in maintenance requirements. A consensus must therefore be reached among the owner, membership and maintenance staff prior to undertaking a redesign project.
“People get very passionate about the appearance of bunkers from a style standpoint and about the playability of bunkers. We as superintendents and the people we work for have to recognize that, first of all, if our goal is just to make our bunkers more playable and make them easier—even though we might accomplish that goal to a degree—we’re not going to make every golfer happy about being in a bunker.”

Golfers want to be challenged to a certain degree, and many won’t be satisfied with a flat lie in a bunker from which they can putt.

“That should not be the foremost objective for redesigning bunkers.”

Randquist said replacing a bunker’s high, sandy face with sod to make them flatter might make them easier to maintain, but their playability will be altered. Reshaping a bunker in that manner is not difficult to do nor is it expensive to undertake, he said.

Deep sodwall bunkers present a unique style of bunkering and will help to prevent sand erosion, but most golfers will find their playability extremely challenging.

“We can have a tremendous impact on how difficult or how easy the golf course becomes. We have to recognize that there are other problems that may arise.”

The Pete Dye-designed Oak Tree Golf Club in Oklahoma City, site of the 1988 PGA Championship, underwent a major bunker redesign after two and three-inch rains severely eroded the dramatic sandy upslopes. Maintenance staff grew tired of repairing the high facings after each severe rainfall, and a decision was made—with Dye’s blessing—to sod down the walls. The redesign meant having to “fly mow” by tethering the newly-sodded slopes.
“Did they save money in regards to shoveling out sand every couple of weeks? Absolutely. Did they save money maintaining bunkers that have this kind of a feature on them? Not really.”

From a financial standpoint, Randquist said he’s not going to tell his membership the club will save money by changing its bunkering style, noting the bunkers might play better, but their sharp edges introduced in the redesign makes them prone to winter kill.

“It’s tough to grow grass on a slope where you can’t maintain nutrition and/or moisture on those slopes.”
At Oak Tree, the bermudagrass being grown on north-facing slopes gets little or no sunlight, resulting in a turf which rapidly deteriorates over time, requiring resodding every few years.

There are two primary reasons for restoring bunkers, Randquist said. One, the original bunker perimeters have been lost and, two, the bunker’s depth has changed over time.

“Over time, when we use mechanical rakes, we tend to stretch out the perimeters of those bunkers.”

The alteration usually occurs by the rake’s centrifugal force which swings the sand outwards, or the operator might be careless and not lift the rake attachments. Consequently, the edges move further out, and the bunker becomes larger and larger.

At Boca Rio, Randquist learned from aerial photographs that his bunkers had expanded in size by upwards of two feet beyond their original perimeters.

“They do change more than you realize over time because of our practices.”

More and more sand is added to them over the years, and they are soon left with little depth.

Occasionally, an architect may want to restore a bunker to reflect its original design, but he might have a modern architect’s vision which might not accurately reflect the original.

Randquist suggested the superintendent investigate to see if the original architect is still living before pursuing a restoration project.

“Find out exactly how the bunkers were done if you’re going to restore them.”

If the original architect is deceased, historic photographs and drawings can be sought to help show how the bunkers initially looked.

“Lastly, select an architect who specializes in that particular field.”

Even if a superintendent has no particular interest in the works of a given architect, he should make a point of better acquainting himself with certain concepts to make his job easier, Randquist suggested.

Undertaking a proper restoration project is not difficult, he said. One needs only to be meticulous and do things accurately.

Poor sand quality, poor drainage or the need for liners or stabilizers are the main reasons for wanting to recondition bunkers, Randquist said.

“If you get to the point where you have to rototill your sand frequently to make it playable, it’s probably time you consider taking your sand out.”

Sand which may have started white in colour is apt to become red with four or five years of erosion.
Drainage systems, especially if they’re not installed properly, are going to begin to fail, Randquist added.
“This is a perfect reason for deciding to recondition our bunkers.”

Occasionally, a combination of two problems necessitates reconditioning, he said. The sand is of poor quality and it has consequently cut off the flow of water down into the drainage lines, “and now it’s time to do something about it.”

Improperly-installed liners which are beginning to surface is another warning sign for reconditioning.
Liners must be stretched tight and properly stapled down.

“It’s up to you as superintendent to ensure that’s done properly.”

If a liner is to be used, Randquist suggested the depth of sand be kept to a minimum depth of about four inches.
“If you go below that, you’re going to struggle because it’ll tend to move around too much. If you don’t have liners, you can get by with as little as two inches if you have the right sand.”

Sand type should be selected carefully, noting both particle size and shape. It might be in the superintendent’s best interests to put in a test plot in advance of a reconditioning project to learn which type of sand is best, he said.

Angular sand is preferable to rounded sand, Randquist said. The latter will constantly produce buried lies.
A recommendation he once received from a USGA official was to use high interceptor drains on the slopes, beneath the lips.

“You would be absolutely amazed at how well this type of system works. I did this in about one-third of our bunkers at Boca Rio in 1998. I regret that I didn’t do it in all of them. The water comes over the top and flows down the floor at the face of the bunker, and you would be shocked at how much of that water winds up in those drain lines and does not erode the bunker floor. It reduces the amount of water on our bunker faces considerably.”
Sodding, not seeding, around the bunker maintains the integrity of the project and prevents erosion, Randquist said.

Related
Bunker maintenance: where it’s been, where it is and where it’s going
Turtle lays eggs in bunker at Nova Scotia golf course
Architects join forces to consult on St. George’s project
Ranch now has fewer bunkers, but perfect drainage