Features Agronomy
Humidity levels, lighting among issues to be resolved before grass can grow inside Rogers Centre

There are still a number of questions which need to be answered before the Rogers Centre in Toronto can begin to provide a natural playing surface for Major League Baseball competition.

Dr. Eric Lyons, associate professor in the department of plant agriculture at the University of Guelph, outlined the compexities of growing natural turfgrass inside the retractable-roofed stadium while speaking in November at a forum organized by University of Guelph turf management students. 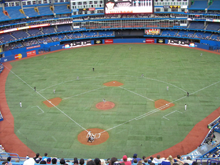 Major League Baseball wishes to see all of its American and National League clubs provide a natural playing surface to ensure consistency among all teams, and Toronto has been one of the last holdouts. Short of constructing a brand new and expensive stadium for baseball, the Toronto Blue Jays organization would rather see its existing synthetic turf field give way to a playing surface that is completely natural.

The Blue Jays have commissioned Lyons to lead a study into the viability of installing and maintaining a natural turfgrass field at the Rogers Centre.

“We can grow grass indoors, especially if you have a roof you can open up 100 times a year in the summer,” he said at the forum at Guelph’s Cutten Fields. “The issue is, what will the grass do to the building?”

Lyons said the Rogers Centre was not designed to take significant humidity loads, and issues still exist with regard to water usage, lighting and power consumption.

“We can do it if you throw enough money at it. The question is, will the building still be there 20 years from now?”

The humidity load created by natural grass and managing it accordingly is one of the biggest challenges on the table, he said.
Air movement studies have been done at indoor stadiums growing natural turf, including in Houston and Phoenix, but they have been done from the perspective of the baseball spectator. The studies questioned whether an individual would feel uncomfortable due to excessive heat and humidity levels which might entice him to stay away from the stadium.

Lyons said he has yet to see a study conducted or read a single report which looks at humidity loads as experienced by the turfgrass itself. It’s a significant issue, he added, because air movement in the buildings studied are based on what is happening in the seating area as opposed to the playing surface.

“That’s why a lot of these previous places have had issues.”

Lighting is another concern to ensure natural turf can survive indoors. Studies are exploring not just light quantity, but light quality as well. The stadium’s artificial lighting needs must be determined, including knowing the type of lights that will be necessary to provide supplemental illumination. Lyons said the objective is to reap not only the full spectrum of the sun, but then to add a little bit more.

High-pressure sodium bulbs generally work well, but, if they are the only source of light for plants to grow, they are not particularly effective.

Lyons and his team have been using specially-designed chambers to conduct various experiments, including lighting and water usage. The chambers were designed for developing methods for growing plants in outer space, giving researchers complete control of environmental conditions.

“If we try to grow these grasses in these chambers with high-pressure sodium lights, they die. Without natural white light, they die.”

He said metal halide lights are a more practical approach, but he figures adoping LED (light-emitting diode) lighting will be the likely strategy because the power consumption is comparatively lesser.

Lyons said there are manufacturers that are currently developing LED mats for the golf industry. The mats are spread out over golf greens to provide supplemental light in heavily-shaded areas.

As part of the lighting study, answers were sought as to whether giving a lower line of light for a longer period of time is equivalent to a higher line for a shorter period. Lyons said there currently is no data for such a query as it applies to turfgrass.

The retractable roof at the Rogers Centre features different sections which open and close at varying speeds. Light experiments have been conducted at the stadium in which certain sections were left open and others were closed. One idea was to open the second and third sections yet leave the fourth section in place. The arrangement would allow the open sections to close in less than 10 minutes if rain should occur. A light assessment was made for the configuration.

Lyons and his team also wondered what result might be realized if the south-facing section of the roof was made transparent. He said it would certainly help turf growth with the abundance of light that would enter the stadium, but feared the heat load generated inside would be too overwhelming for the Rogers Centre’s heating, ventillating and air conditioning (HVC) system to handle. He admitted that realistically, the roof could never be made transparent because the building would never sufficiently cool off.

In studying light quality, Lyons pondered if building shade would be of better or less quality than the shade produced by a tree. He said there is actually greater light inside “as far as the plant can see the world” than there is with full sun. The blue-coloured stadium seats produce a shift in the visible spectrum because of the amount of blue being reflected. The blue seats create an ideal growing environment, he added.

The same chambers used for light studies were also used for studying water usage. Some chambers allow for barometric pressure measurements within them so that the amount of water which leaves the plant can be measured at a constant humidity level.

Lyons said it is a complicated system. Studies got underway with a measurement of water use at field capacity.
“It’s the worst-case scenario for building operations.”

At field capacity, the soil is saturated which shows potential water use when overwatering. In addition to gathering water loss data from the weight of each scale, a condenser condenses water from the chamber to maintain a constant relative humidity. It also allows a look at water loss as a whole throughout the chamber.

“One thing we discovered that really surprised us was the sheer amount of water loss in the dark.”

Lyons said the prevailing theory is that grasses close their stomates when it’s dark so as not to use up water. Stomates open in sunlight to cool themselves and close at night to preserve water. He said there was a fairly constant slope when comparing data from four hours of artificial light vs. 16 hours. Both daytime and nighttime water loss data were collected.

Grass has an impetus to get rid of excess water.

“It’s an evolutionary strategy because every turfgrass we use has a dormancy response to drought.”

Grass will go dormant when water is limited, but will come back and live through a period of drought when water returns. Many competitive species in a grassland can’t live through an extended drought. Clover, for example, will remain green for four or five weeks, but drought which extends to seven or eight weeks will result in death.

Turfgrass, when saturated with water, uses an excessive amount of it. With less than field capacity, the amount of water use by turfgrass drops off significantly.

As water for turfgrass is withheld, it uses less.

“Once we trigger that drought response, they start preserving water.”

Lyons said if grass is never allowed to experience wilt, it will continue to use the maximum amount of water it can because it is trying to outcompete its neighbours by depleting their water supply.

When grass is well watered, it uses more of it. When it’s withheld, more is preserved.

He said if the plant is going to keep its stomates open, the greater the load, the more water it’s going to use. By restricting some water as vapour pressue deficit goes up, drought response can be triggered and water conserved. As relative humidity goes up, the opposite happens.

There is drainage on the field at the Rogers Centre because of how the building was constructed, but there is no such drainage in the stands. When the stands are power-washed, the water is vacuumed immediately because there is nowhere for it to go. In the event of a heavy rainfall, the water would hit the stands, pool up to a height of about three feet, and then overflow. If it is raining or precipition is imminent, the roof cannot remain open.