Features Golf Profiles
Getting a head start on climb up ladder 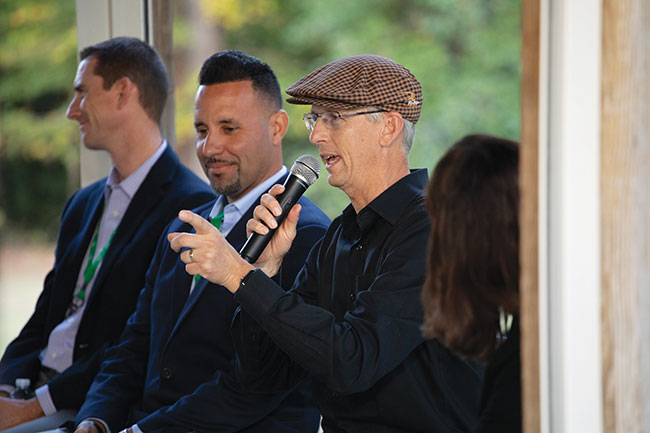 Grant Murphy, superintendent at the Barrie Country Club, served as one of the mentors at the recent Green Start Academy in Raleigh, N.C.

Eight Canadian assistant golf superintendents have been fast tracked toward becoming full superintendents after having taken part in a specialized training program last fall. The assistants were participants in the 14th annual Green Start Academy in Raleigh, N.C., a program co-sponsored by John Deere and Bayer Environmental Science.

The program was conceived in the aftermath of the golf market crash at which time there was an overabundance of both golf courses and assistant superintendents in North America. Turf schools were producing scores of budding assistants at the time, but few positions were available, and not enough superintendents were retiring.

“When a job did become available, it was highly competitive,” Mike Hirvela, customer marketing manager of golf and sports turf for Bayer, said. “A lot of times it was who you knew and not necessarily what you knew.”

This led to the development of a program designed to give assistant superintendents a competitive advantage in the market when a job became available. Most assistants were already well versed in the agronomics associated with the position, but had little knowledge of other key aspects necessary for them to move up the ladder.

Hirvela has been involved with the academy for seven years. The 2019 program was his first time as Bayer’s facilitator.

Ren Wilke, John Deere’s North American tactical marketing manager, said the academy is the longest running program of its kind in the industry. Officials from John Deere and Bayer receive between 125 and 150 applications each year from assistant superintendents throughout North America who wish to participate in the program. From that number, 50 assistants are accepted based on their resumes, reference letters and applications.

Each applicant is “blind scored” by a panel of judges.

“The panelists have no idea who the applicants are and they’re judged solely on their applications,” Wilke, who has been involved in the program the past six years, said.

Since he’s been involved with the academy, the number of participating Canadian assistants has grown steadily, he said.

“Eight out of 50 is a really good showing from the Canadian group.”

Miranda Robinson of Cordova Bay Golf Course in Victoria, B.C. was among the Canadian group at the academy.

The assistants speak
Geoff Griffin, assistant superintendent at the Port Carling (Ont.) Golf & Country Club, said learning how to grow the best turf possible is taught at the post-secondary level, “but we don’t really learn how to manage people, and managing people is one of the biggest parts of our job.”

Learning how to get the best out of a maintenance department’s workers and becoming the best manager possible were key lessons learned at the academy, he said.

“You don’t only learn how to manage, but how to deal with members as well and the best way of communicating with them,” Griffin said. “It’s always an ongoing process. You never stop learning. I feel one step closer to obtaining a position I want as a superintendent.”

Cody Little, assistant superintendent the past three seasons at Springbank Links Golf Club in Calgary, said he was encouraged to apply to the academy by his superintendent, adding he was “pretty keen” on the idea.

“The academy helped realign my goals as a manager and what I actually need to put forth to achieve what these guys (academy instructors) have achieved and all the hard choices they had to make and everything they did,” Little said. “It teaches you to rely on your team and boost morale and just know that they’re there to help you achieve your goals. It’s hard to do on your own, so all these people are here to help you and make the job a little easier.”

Cole McKenzie, who just completed his sixth season as assistant superintendent at Calgary’s municipal Shaganappi Point Golf Course, said the academy for him was about career building and using his personal tools to advance toward a superintendent’s position. Being upwards of 10 years older than most of the other academy participants provided a spark for him.

“I found that really pushed me to look outside of what I know of city golf and look more towards a career aspect as where the next gig will be because it might not be as a superintendent for the City of Calgary,” he said. “It might be taking a superintendent’s role in the private industry in order to advance my career and really diversify my skills.”

McKenzie said he has always considered himself a good communicator, and the academy pushed the need for good communications and team building. He said the program prepared him to “step up” his interviewing skills and become more professional.

“What I took home from the academy is there is more than one way to get into the position that you want,” Adam Kimber, assistant superintendent at Kitchener, Ont.’s Westmount Golf & Country Club, said. “That panel of superintendents and directors of agronomy all had their own stories of where they came from and how they got there. They stressed not to get caught up in titles and what other people are doing. Just focus on what you’re doing and hone your own craft and build your own brand. Through that process, if you’re doing things the way you want to do them, then you’re going to get to where you’re going.”

Kimber said he wants to continue to build his knowledge base and work on his people management skills.

The academy’s networking aspect introduced him to a wide range of personalities, and he said he enjoyed the exchange of stories of the various challenges everyone faces.

“We’re all different people but at the same time we’re all trying to do the same thing.”

Geoff Hay, assistant superintendent at Oakfield Golf & Country Club in Enfield, N.S., said the academy’s message to him was clear.

“It was more about managing people and managing yourself,” he said.

Hay’s role at Oakfield is to manage the grounds maintenance staff, and the academy taught him how to maximize the productivity of his workers by tailoring his people management skills to each individual and not necessarily treating them all the same.

“Having Green Start, if I walk into an interview, that’s just another positive,” he said. “It’s an extra little bump that if somebody sees that, they’ll go, ‘That’s a very respected program.’ It’s really nice to have that on my resume. I’m sure it gives me a leg up on the majority of people.”

Networking
Hirvela said the academy’s networking aspect was a critical part of the program.

“One of the big changes we’ve made is to create peer groups prior to the event where the assistants can reach out and meet with the mentor superintendent who’s in charge of them, and they’re having conference calls, they’re reading books, they may be doing Harvard business reviews – different things to work on their individual development.”

The implementation of more connection among the participants helped give the event “life and legs” beyond the three days spent in Raleigh. The formation of peer groups ahead of the academy was a strategic move, Hirvela said.

“They know each other already, so when they show up they have a level of comfort with 20 per cent of the people at the event.”

Wilke said the academy helps the assistant gain the necessary knowledge required for the next career step.

The other Canadian assistant superintendents who participated at the Green Start Academy were Paul Sullivan from the Mississagua Golf Club in Mississauga, Ont., Miranda Robinson of Cordova Bay Golf Course in Victoria, B.C. and Daniel Gelder of the Devil’s Paintbrush in Caledon, Ont.