Building and maintaining a positive community image can go a long way for municipal parks and recreation managers who are seeking funding for their programs. Establishing good relations with facility user groups is one such approach toward reaching that objective. So, too, is working closely with neighbouring municipalities as a means of joining forces to achieve a common goal.

Rory Doucette, managers of parks and open spaces for the City of Welland, Ont., spoke about the importance of relationship building during the winter’s virtually delivered Ontario Turfgrass Symposium.

He previously worked for the City of Waterloo where he had established relations with a regional sports tourism office that included representatives from the cities of Waterloo, Kitchener and Guelph. The group worked as a collective unit to attract large sports tournaments to the region – each offering up its assets that included Class A fields. By working with other municipalities, bigger tournaments could be scheduled that couldn’t possibly be arranged by one municipality acting alone.

“You may not have the resources now to bring in a large tournament, but you can definitely work with your neighbours to start creating that opportunity,” Doucette said.

It’s all about positive imaging, he added, suggesting large tournaments do wonders for a community in terms of their economic benefits and their ability to paint a community in a positive light.

The ways in which municipal parks and recreation staff engages with community user groups may differ from one municipality to another, he said. In Welland, opportunities exist for staff to interact directly with user groups.

“That’s where the positive imaging starts – the one-on-one conversations, the ability to help them out when they’re in a jam, and to create those relationships when you’re on a first-name basis with the staff and user groups.”

Not all user groups are co-operative, and some can be “pretty nasty,” Doucette said.

Parks managers can help change cold relationships and put a positive twist on how both parties can work together, he said.

“There have been times where I felt it was very adversarial and it doesn’t need to be. We’re trying to arrive at the same goal.”

A user group may wish a top tier pitch to play on, and a parks manager may wish to fulfill the request, but it’s important both sides meet regularly or seasonally to discuss the matter. Doucette said the message sent to the user groups is that their needs are important and should never simply be a case where they’re told, “Here’s your permit. See you next year.”

Doucette said when he’s asked by a user group if the municipality can host a national or provincial tournament, he can take the request to council to ensure the proper amenities are provided.

Pooling sports facilities
If a municipality has a strong number of minor players in a particular sport, it will eventually need a major facility to become available in about 15 years, he said. Since coming to Welland, Doucette said he has been told the city didn’t have the necessary facilities to play host to a large-scale baseball tournament. By looking to the neighbouring municipalities of Fonthill and Pelham, however, a pooling of facilities and resources could be achieved to create a large-scale event that would benefit the entire region.

Such events as soccer tournaments generate a “ton of money” for a community.

Municipalities which have several competitive “rep” teams will have to start looking at building Class A fields or upgrading lesser facilities if they wish to stage large tournaments, Doucette said. 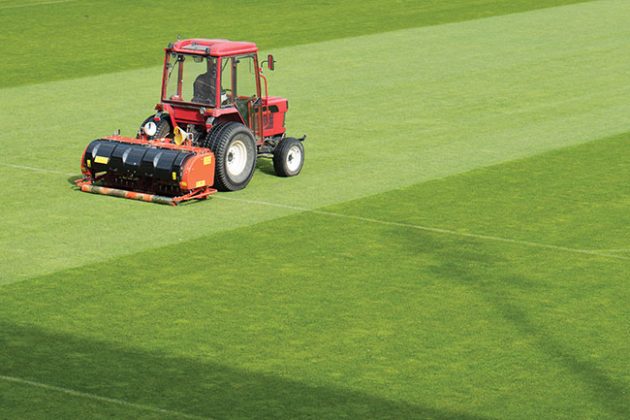 A soccer field is aerated as part of its routine maintenance practices. By meeting regularly with user groups, parks and recreation managers can better discuss a field’s specific needs. Photo credit: Dziurek/Adobe Stock

A strategy that municipalities can use to promote themselves more effectively as potential tournament destinations is to play up on a notable geographic feature or something that sets it apart from other cities and towns. Doucette said he would “sell” the Welland Canal to promote Welland. Other municipalities may have thriving downtowns or unique landmarks they can use to promote themselves. These are attributes that can be sold to municipal councils when seeking funding.

“If you can deliver something on a silver platter for your council and go up there and be able to look at this tournament and look at the parks department and look what they’ve doing, at the end of the day they hold the purse strings to what we’re trying to do, and that’s who we have to help bring into our fold and give them something positive to speak about. We’re selling ourselves through them and at the same time we’re selling them to the community.”

When seeking council funding, municipalities have options, Doucette said. If a Class A field is sought, money to build one from scratch may not be available, but a lesser field could be retrofitted at a cheaper cost. Small tweaks can increase field size and playability. If a community is growing and a particular sport is becoming increasingly more popular, council could be persuaded construction of a Class A field is a solid investment.

He said the operational side of the equation must be considered when superior fields are requested. It’s one thing for a field to be built, but sometimes the annual costs of its maintenance are overlooked. New fields can be built, but if there is insufficient labour to look after them, they will quickly fall into disrepair. Capital costs must be considered in tandem with operational costs, Doucette said.

Operational costs must include such other considerations as equipment and fertilizer. If sufficient money isn’t included in the budget, it will have to be pulled from other areas. Some municipalities are blessed with new equipment while others may have to work with older, broken-down tractors.

“You need to understand what equipment you have, and can you keep up with what you have?”

There must be a connect between building and operational costs to prevent having to scramble for unaccounted expenses.

Parks managers are encouraged to devise 20-year plans to accommodate future expenses and should explore available federal and provincial grants that are sports specific, he said.

“Start chasing grants. Get that money. It should be based on the needs of the community and what you’re trying to do.”