Sometimes landscapers must ‘fire’ a customer 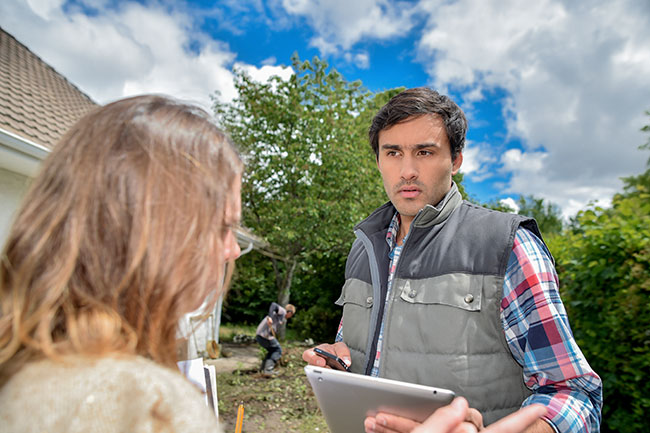 Landscape contractors may be faced with having to sever ties with customers for several reasons, but in the end it’s best for the company. Photo: auremar/Adobe Stock

Landscaping companies, like other businesses, offer professional services to commercial and residential customers in exchange for payment. Customers will sometimes cancel the services of landscape contractors for one reason or another, but it’s not often that contractors will “fire” their customers. When it happens, it’s usually for a good reason and one which benefits the landscaper.

A panel of industry professionals shared their reasons for saying “no” to existing or would-be customers during the winter’s virtually delivered Landscape Congress conference.

“Why would I say no to potential work?” moderator Haig Seferian, founder of Burlington-based Seferian Design Group, asked rhetorically when introducing the session. “We’re all looking for work, and this is one of the reasons we’re in business.”

He said he learned long ago that not all projects or clients are good matches for contractors. One of his long-time customers was always tardy in making payments for completed work, sometimes taking up to a year to pay his bills after numerous reminder telephone calls.

“Then I made the decision to end our relationship, to which he thought I was joking,” Seferian said. “It was a tough pill to swallow.”

He said that although his decision closed the door on that business relationship, it opened new ones to work with customers who shared the same philosophies.

Beth Edney, owner of Toronto-based Designs by the Yard, said there must be a good fit between the customer and the business, especially in the current era of labour shortages and supply-and-demand issues.

“Some of the things I think about when I pick a client is, do they fit my scope of work?” she said. “If it’s not something I’m interested in doing, I’m not going to take that work on.”

Edney, who founded her company 28 years ago, recently won a bid on “a really neat project,” but later found the scope of the work contained elements that didn’t fit into her timetable.

“Look at the projects and see if they’re really something you’re interested in doing.”

Clients can also be filtered out based on where the contractor wishes to work, yet her foremost consideration is for the customer’s values.

“I want clients that reflect me,” she said.

Edney parted ways with a customer a few years ago because the client didn’t appreciate the same things in life she did, and they didn’t reflect the same values.

“They were nickel and diming me for everything, yet they could afford to have four nannies.”

Edney said there are warning signs to be aware of when dealing with clients, especially when they start recalling bad experiences they’ve had with other contractors.

Trust your gut
Contractors must trust their gut, she said, adding there’s a tendency to set aside their true gut feelings when first meeting a customer.

“That gut has served me every time. When I should have gone with my gut reaction with that client and something wasn’t sitting right, I should have trusted my gut because it was bang on.”

When a contractor is inundated with work, he feels overwhelmed, Edney said, adding a balanced schedule provides peace and clarity.

“We can let some of that go and have room and opening for other projects. When you give that room, it opens the door so that you can do projects that you’re passionate about and you love to do.”

Frank Ferragine, dubbed Canada’s garden expert and a regular on CityTV’s <i>Breakfast Television</i>, said he’s often pulled in multiple directions with his work which includes operating Bradford Greenhouses Garden Gallery, a family-owned business. Time devoted to family, including his two sons, is important to him.

“I have to make sure that with my time, I’m using it in the right way,” Ferragine, who also goes by the media moniker Frankie Flowers, said.

Projects and jobs will come along many times that seem exciting and worthwhile, but if they don’t fit the criteria of the contractor, he ends up frustrated, he said, “and sometimes you’ll find the best ‘no’ will lead to a better ‘yes.’”

Ferragine said he learned to say no after taking a retail course that provided instruction in ways to “fire” a client.

“There is a time when you have to fire a customer because there will be a time that no matter what you do, there’s no way you’ll be able to satisfy that customer, there’s no way you can make a profit out of it, and you won’t enjoy what you’re doing.”

By saying no, the contractor is better focused and can stay on budget and on time, he said, adding that deciding on the type of customer with whom he wishes to work will provide the framework of when to say no.

“If you say yes all the time, you’re going to have a lot of problems overall.”

Jim Mosher, owner of Landscape Plus in Etobicoke, said saying no doesn’t come easy for him.

“We’re wired to please,” he said, “and I needed to create a system that tricked me into keeping that ‘no’ in front of my face all the time so that I could be properly aligned and have the opportunity to make a profit.”

Mosher said the key words to help him achieve that goal are “responsibility, clarity and discipline.”

Landscapers are only human, he said, and sometimes ego and emotion can come to the forefront. The qualifying system he has devised for relationships with customers “is designed to protect me from myself.”

Criteria for new customers
Mosher said he has three criteria for taking on new clients: they must be a budget fit, there must be an intellectual and artistic challenge, and they must be in ethical alignment.

Being a budget fit is a ground-up and deep understanding of the numbers required to make the job float and provide a sufficient margin for the job to be profitable.

“There’s no wiggle room for this. Our sustainability and our future as a company depend on this.”

Landscape Plus has been operating for 38 years, and Mosher said the company’s toolbox of skill sets is deep, adding the flipside side of that makes it difficult to challenge workers. If something comes up that isn’t in line with what the company is after, he said he’ll raise his hand.

The need to be ethically aligned has its obstacles. Mosher said there are some products available for use in Ontario that he’d prefer not to use for ethical reasons.

When interacting for the first time with a prospective customer, he said he wants to engage in a 15-minute telephone conversation before deciding if a face-to-face, on-site meeting is warranted. This helps to determine if the customer is simply looking for free consulting.

Budget discussions can be delicate during the initial phone conversation, he said.

“Using the word ‘no’ isn’t cocky or arrogant,” Mosher said. “It’s simply a tool to be used respectfully to make sure we’re fully aligned with new clients and create the possibility of being profitable.”

The three panelists were asked if raising prices might be a more practical way of dealing with unwanted customers than to fire them.

Ferragine said raising prices can be interpreted as gouging, and that could trigger other effects.

“Honesty is the best policy,” he said. “Letting them know they aren’t the right fit or their timelines aren’t compatible is a better way than randomly raising prices, as you open yourself up to other issues.”

Edney said she has presented higher quotes to customers who “push my buttons,” yet she’ll continue to take on such projects if the customer accepts the price hikes. She said she has customers whose working relationships she enjoys while there are others who are acrimonious, and higher fees are apt to be built into their quotes.

Mosher said he doesn’t like to juggle his rates for customers who aren’t the right fit. Telling them so and severing their relationship is the best way to handle such matters, he said.

“As much as it hurts and you don’t want to do it, I think honesty’s the best policy,” Seferian suggested, adding there may not be any amount of money that would allow him to continue to work with an unwanted customer. He would otherwise “begrudge” working with that customer every day.

“I’d rather be known as the guy who’s too expensive for most than the guy who works for everybody, and then there’s problems,” he added.