Features Agronomy
What is old is new again

My contributions to Turf and Recreation magazine to this point
have been, for the most part, technical in nature. For this article I
am changing gears a bit and telling a story about an interesting aspect
of links course management I learned as part of my internship on the
Old Course at St. Andrews, Scotland.

The summer of 2000 was very interesting in that I was one of four summer interns, two of us from the U.S. and the other two from Australia, who had the privilege and pleasure of working on the oldest golf course in the world, on which the oldest major tournament was being held that year. We learned many aspects of managing a course of this calibre as well as preparing for, and cleaning up after, a tournament that would see the traffic of more than 60,000 spectators over the week. 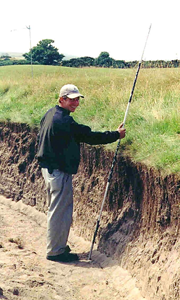 Throughout our internship, my fellow “Yank,” Todd Zoerink, was persistent in his quest to help rebuild a revetted bunker (one that has walls constructed of stacked sod). After several months of politely asking Eddie Adams, head greenkeeper, the request was granted.

The third week of August was scheduled to be our last there, and on that Wednesday we began the reconstruction of a small bunker measuring approximately three by five metres with the depth ranging from about half a metre to a metre-and-a-half. The face of this bunker had been constructed out of heather as an experiment (fig. 1).

Before going any further, I will give you a bit of background on the maintenance of the revetted bunkers based on articles read prior to my internship and stories from co-workers and supervisors at the Old Course.
The climate on the eastern coast of Scotland is fairly dry, with St. Andrews receiving only about 65 centimetres of precipitation per year. The courses of the St. Andrews Links Trust are situated adjacent to the Eden Estuary where drying winds blow all summer long. These environmental factors combined with the maintenance necessary to move displaced sand from the walls back into the bottoms of the bunkers make it necessary to rebuild them every three to five years.

Although the managers of the Old Course strive to maintain as many practices from yesteryear as possible, some newer technology has crept into the bunkers to extend the period between renovations, such as irrigating the walls to retain moisture and ultimately turf. In an effort to maintain the shape of some of the larger bunkers (such as the world famous Hell bunker), railroad crossties were installed behind the walls so that there exists a template against which the walls can be rebuilt.

It was in the spirit of innovation, and in an effort to find a new bunker face medium that could withstand the hardships of the Scottish east coast, that the experimental heather sod was used. It failed, miserably (fig.2).
The need to rebuild the face ahead of schedule was bad news for the experiment, but good news for us.
On that Wednesday morning, Todd and I, under the direction of the senior (equivalent to second assistant superintendent), loaded up a trailer behind a small New Holland tractor with everything we would need: three shovels, two rakes, two brooms, a half-moon edger, a sod cutter, a tamper and an old flagpole.

First we removed the old face (fig. 3), being careful not to cut into the turf around the top of the bunker (we would later use this existing “lip” for structural stability), and then the sand from the bottom separately so that it could be reused. Some soil was left in the centre of the bunker to backfill the new wall. The base of the new wall was then leveled and the sides cleaned up.

We then took a long tractor ride out to the 46-acre sod nursery that is part of the Links Trust. After a few attempts at cutting sod for the new wall, irrigation had to be run for a while to “soften things up.” After the cutter was finally able to penetrate the ground, we cut just shy of 100 square metres of sod and carted it back to the site. I thought this was overkill, but at the end of the project, we used nearly the entire load.
We then began the process of laying a new wall. On the ground around the outside of the bunker, we laid out strips of sod that were then cut in half length-wise (fig. 4 & 5). Around the bottom of the bunker, just inside the natural soil walls we laid the first layer of sod. This initial row, from which the rest of the wall would take shape, took the longest time to place, as much “eyeball” measuring and shifting was necessary to ensure that the correct shape was being made (fig. 6).

The subsequent layers piled up fairly quickly. Every row was laid on top of the last, with a “thumb to about the first knuckle” measurement offset and a check for alignment with a flagpole from the inner edge of the first layer to the top lip that remained of the old wall. Each row was back-filled and tamped to provide a firm base for the next and to prevent settling and cave-in over time (fig. 7).

As the wall came up to the existing top, some careful work was needed to backfill the last few layers without compromising the overlapping, surrounding sod (fig. 8. As we completed the wall, it was becoming obvious that the layers went back too far as they came up (fig. 9), so we had to cut back the top to compensate (fig. 10).

The senior made the point that it is was very important to maintain the original top edge, because otherwise the bunkers would continue to grow over time. He further explained that the next time this bunker was to be rebuilt, the top circumference would have to be reduced, which would involve sod right to the top, abutting the existing lip.

We finished the bunker on Friday afternoon at about 2:30, which did not please the senior as “leaving” time was 2 o’clock on the dot. To help make the cleanup faster (and help get to the pub sooner) a few other crewmen pitched in to help. Everything went smoothly until another intern, pulling the trailer of scraps away, drove too close to the edge and caused the wall to give way on one of the shorter faces (fig. 12). So, a couple of hours on Saturday morning were spent restacking the wall to make sure the project was completed before boarding the train home. The only part of the process we missed was adding sand back into the bunker, but considering the number of hours that we interns spent in the bunkers that summer, I think we understood that part pretty well.

See print edition for all photos

Related
Know which way to approach a major bunker project: speaker
Scarboro to build new irrigation pond for its centennial anniversary in 2012
Turtle lays eggs in bunker at Nova Scotia golf course
Bunker maintenance: where it’s been, where it is and where it’s going