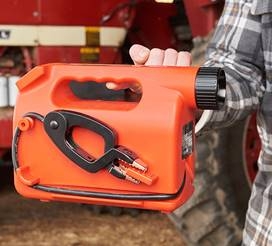 “When you are far out in the field cutting and digging multiple jobs in a day, having reliable power is critical,” Gerry Toscani, CEO of Weego, said. “Any time spent dealing with a dead battery while under deadlines can mean the difference between a good day and a bad, expensive one. Instead of stopping everything to try to get a jump service or auxiliary equipment in motion, you can reach for Crankenstein with literally one finger. It’s a real time-saver and workhorse on any landscaper’s truck.”

Smart
A premium OLED screen clearly walks users through the jump and communicates warning messages, light brightness level and connection quality for intuitive, effective and safe use. User training is not required. A built-in voltmeter is included to measure battery voltage. Crankenstein’s patent pending Connection Detection technology displays the quality of battery terminal connections so users can adjust the clamps to achieve maximum connectivity with minimum resistance; this reduces the amount of time to make adjustments and initiate multiple start attempts with lead-acid jump boxes. In addition, Weego’s Hotfoot™ technology allows operation in temperatures as low as -28 degrees Fahrenheit, warming up Crankenstein’s internal batteries to -5 degrees Fahrenheit for an assured jump in extreme cold.

Safe
Weighing only nine pounds, Crankenstein is guaranteed to be the easiest to transport, store and use. The premium, high-performance, lithium phosphate (LiFePO4) battery is ultra-stable, making it an incredibly safe lithium chemistry for jumps requiring durability and resistance to potential over-heating situations. Crankenstein is built with reverse polarity, anti-spark, over-current, over-discharge, voltage detection and temperature protections to ensure the user, equipment and Crankenstein are safe.

Rugged
Crankenstein’s reinforced case is built to withstand the rigors of repeated use and handling in the harshest of environments. It is IP65 rated for water, dust and dirt resistance. And it works in extreme temperatures with an operating range of -28 to +140 degrees Fahrenheit. Crankenstein’s battery is rated for up to 2,000 life cycles and will hold a single charge for over one year.

Versatile
An intense 1,000 lumen LED work light with adjustable focal length and brightness level is built-in offering 15 hours of extra light on a single charge. Crankenstein can be recharged on the go in just six hours with the supplied USB-C DC charger or from a standard AC wall outlet. It includes two USB-A ports with fast-charge technology and a USB-C port for phones and tablets. A 12V/15A CLA port accepts power inverters and other 12-volt equipped tools and gear, capable of running laptops and other AC-powered devices away from a wall plug.

Quality
Crankenstein is designed and engineered in the USA, lab tested both externally and internally and is covered under a one-year warranty. It is certified to the standards of the BC, FCC, CE and RoHS. Each unit includes a USB-C 15V/2.4A wall charger, a 12V DC USB-C car charger, a 40-inch charging cable and storage bag.

Crankenstein is priced at $699 and now available at www.myweegopro.com.