July 2012…the hottest weather on record, at least in eastern Canada,
combined with a long dry spell that lasted 28 days. Did your client’s
storm/rainwater cisterns run dry?

Most will have if they followed the norm which is to size for three weeks of no precipitation. Or maybe they ran out in the first week because the cistern was undersized compared to the water the irrigation consumes in a week of watering. Timely rain is supposed to arrive filling the cisterns, but this did not occur for many.
How much water? 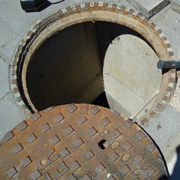 Depending on the type of irrigation system in use, the quantity of water to be stored will vary widely. Conventional spray/rotor systems consume water at a faster rate than the newer high efficiency rotary/low volume systems being designed for LEED projects.

Storm and rainwater harvesting say we can capture approximately 60 per cent of what falls on the site.
Alternatives to captured reclaimed water

Usually the only other water supply in an urban centre is the city water supply. This has and is being used to top up cisterns so the pump can still be used to send the water into the irrigation system. Problem? Yes. What if the city fill line to the cistern just completes topping up the cistern to let’s say 30 per cent? And now it RAINS! Where does the captured rain go?

It cannot just wait around until the city water has been used up. Oh, no! You will have lost the opportunity to capture this free rain. Payback to offset the cost of creating this system is now way down the road. Even worse, the top end of the cistern has an outflow pipe that takes about 20 per cent and sends it away to the city sewer or local water courses.

Rather than filling the cistern, a water resource manager will control when the pump comes on, shuts down due to low water level and energizes the city water master valve to complete the irrigation watering cycle, without sending any water into the cistern. This solves two issues: one, do not fill the cistern with city water; and two, complete the irrigation cycle for that day so the grass and plants receive the water that is scheduled to be delivered.

Cisterns need to be sized to capture and hold three weeks of water. A new home construction project could very easily create a cistern out of the garage three-wall foundation by adding a fourth wall and a bottom, plus waterproofing. The garage floor is going to be poured anyways. Downspouts and storm drains could be routed to empty into the cistern, which should be on average around 32,000 litres for an average city lot of 50 by 100 feet.

So, 2,000 times 4 equals 8,000 gallons per week times 3 weeks (dry spell) equals 24,000 gallons or 90,849 litres. This is a large tank almost the size of a basketball court and almost as deep as four cars stacked on top of each other. High-efficiency, low-volume drip dripline combined with rotary nozzle sprays for larger areas will consume about 50 per cent of the above or require a tank of 45,000 litres to be able to provide captured water for a three-week dry spell.

As you have seen, sizing a cistern is not a guessing game. On average a cistern can cost $1 per gallon, and this may not include installation, piping, screens, pump(s), filters, control system, and some other items like check valves that all go together to make up a functioning reclaimed water cistern supplied automatic irrigation system.