Looking, listening and feeling can detect small problems before they become big ones 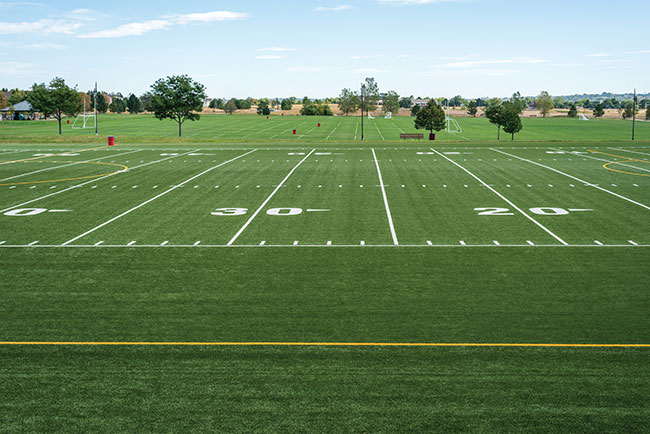 Regular walks about an artificial turf sports field can help extend the life of a synthetic surface beyond the manufacturer’s projection. Photo: David Prahl / Adobe Stock

Artificial – or synthetic – turf has been in existence for more than half a century, and has gone through a succession of generations over the years – each a notable improvement over the previous version.

It has been the playing surface of choice for several professional teams in such sports as football, baseball and soccer. Municipalities have been enticed by the allure of artificial turf sports fields for various reasons. Although many of these cities and towns prefer natural turf playing surfaces, having an artificial field on hand gives their worn natural fields a chance to recuperate for a week or two without depriving user groups of a place to play.

Many municipalities also like being able to schedule games on a field that is ready to go immediately following a rain event.

One of the fallacies associated with artificial turf, however, is that it’s maintenance-free. In fact, it requires regular maintenance just like its natural counterpart. It’s only the type of maintenance that differs.

Manufacturers of artificial turf note that a field’s lifespan is generally between five and eight years. But, regular daily maintenance can extend the life of a synthetic field significantly longer.

Cam Lawrie, facility supervisor for the University of Guelph’s Alumni Stadium, Gryphon Fieldhouse and other outdoor fields, spoke of the importance of artificial turf maintenance last winter during the virtually-presented Ontario Turfgrass Symposium.

The oldest of the university’s artificial fields entered its 12th operational season in 2021, proving that regular maintenance can breathe new life into synthetic fields.

“It’s quite a departure from the recommended lifespan,” he said.

The university has developed a robust system of maintenance for its artificial fields with a program aimed at keeping safety levels and playable conditions to a degree on par with when the system was originally installed.

“Most of the things we had that have required repair were preventable if we had paid a little more attention to our regular routine maintenance.”

Lawrie said proper field maintenance is beneficial culturally, economically and environmentally. User groups that find the field’s surfaces safe to play on will trigger an economic benefit, he said.

“It will bring more revenue to your facility, to your municipality, and it will bring others as people tell their colleagues and friends about the great facilities they have, and it will also reduce the economic cost of replacing a field as well.”

Revenue is generated as a result of a well-maintained artificial field, and money is saved by not having to replace the field as readily. Additionally, the sports field manager has become a good steward of the environment by not having to send large quantities of material to a landfill.

Walking the field
The key to a good maintenance program is having staff who are well-trained and knowledgeable, Lawrie said. The first and perhaps most important step toward a solid maintenance program is to walk a field and look for signs of pending problems so that they can be addressed before they turn into safety and playability issues.

He noted a soccer field on campus had developed a small hole in the back of the turf adjacent to a penalty kick dot. Although the field was already eight years old at the time, the hole was preventable and was largely due to a lack of maintenance and observation. The fix, he said, would have involved taking a few seconds to walk over the spot and feel a divot forming in the field’s infill system. About 30 seconds of sweeping to redistribute and relevel the infill material could have prevented the hole from developing, he said.

Lawrie recalled another preventable setback that happened at the university’s varsity field in which a penalty dot area had detached from the seaming paper that held it in place amid the turf around it. The detachment was upwards of two inches in size and, although the turf was aging, “overall, a lack of maintenance and a lack of observation led to a situation where the fibres in the turf were unsupported by the infill system in it, and we saw some damage result from it.”

That problem, too, could have been identified by means of a field walkabout and taking the short time needed to sweep the infill. The expense of time and labour involved would have been minimal, he said.

One of the more peculiar setbacks occurred to a campus football field in 2020 during the COVID-19 spring lockdown. A squirrel had allegedly tried to bury a walnut into a section of the field at the 15-yard line, approximately midway between the hash marks and numbers. Before long, a new walnut tree began to grow with a developed root system and branches. Lawrie said if someone had walked the field, the walnut could have been spotted and removed before it caused any damage.

Weeds can be detected during field walks and pulled before they create bigger problems, he added.

“The techniques that could have remediated those problems were simple and didn’t require any extensive machinery or knowledge, but were ignored long enough that they created a bigger problem. A repair is never as good as the original installation.”

To repair the hole found in the penalty dot area of the soccer field, a square of turf from the field’s edge was cut out as a patch, but it didn’t look the same and it compromised the field’s playability. 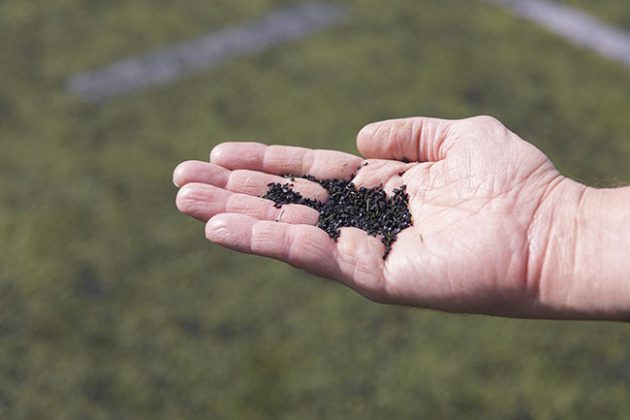 Tire crumb rubber was once the standard infill used in artificial turf sports fields, but a shift has been made to thermal plastic and organic materials.
Photo: @Angela / Adobe Stock

Infill system types
Lawrie said there are two types of infill in artificial turf systems – stabilization infill and function infill. The stabilization infill stands up and supports the turf fibres. Function infill gives the field its cushioning and feel. Infill had traditionally been made from recycled tire crumb rubber, but technology has since ushered in thermal plastics and other materials designed for shock absorbency. With the industry turning toward more environmentally friendly solutions, several manufacturers have opted for organic infill products.

Lawrie said that in areas of high traffic and wear, the proportion may shift to three-fifths stabilization and two-fifths function in order to properly support the fibres that are experiencing high stress and strain during game play.

Fibre projection is the amount of turf that extends above the infill system, and is about 18 to 20 millimetres for a straight-bladed product and 15 to 18 millimetres for a textured fibre. At the University of Guelph’s varsity field, the fibre length is about 42 millimetres in total, meaning there are only 22 to 24 millimetres of infill material to provide the necessary shock absorbency.

“That’s why it’s important that we maintain this infill system and why we pay close attention to it.”

Field walks and basic remediation are the “bread and butter” of a maintenance program, Lawrie said, adding they must be done on a day-to-day basis to properly maintain the turf, especially as it ages.

Field walks are a systematic inspection of a field’s surface, particularly in high-traffic areas including penalty corners, face-off dots, goal mouths, access points, bench areas, seams, in-laid lines, logos and numbers. The field should ideally be walked in five-yard passes and include both the playing area and its surrounds.

When walking a field, all foreign objects need to be picked up. Lawrie said among the items that have been picked up on his fields include Lego blocks, jewelry, athletic shoe spikes, and screws, nuts and bolts. Those assigned to walk fields should be looking for signs of trouble, he said. Early detection, especially in high-traffic areas, will allow 85 to 90 per cent of abnormalities to be remedied before they become larger problems.

On aging turf surfaces, unusual-looking lines and bunched-up seams are indicators of degradation. Divots in the infill can be detected by a difference in colour and texture of the turf, indicating a shift in infill material. Bare patches allowing the backing of the surface to be seen suggest fibres have been ripped out.

Infill can be swept back into place to level out divots. Lawrie suggested taking a stiff-bristle broom and, while walking in a circular pattern, sweep in multiple directions. A soft-bristle broom can be used afterward to create a smooth finish. The process takes, on average, between 30 seconds and two minutes to accomplish.

“If the divot is extremely deep and goes right down to the stabilization layer of the infill, you might need to add some sand back in to protect the integrity of those fibres.”

If infill has become too compacted, a similar yet opposite approach is recommended. A soft rake should be used at the outset to help loosen up the infill while walking in a circle and raking in multiple directions. A stiffer rake can then be used immediately afterward. Lawrie said the process should take between two and 10 minutes to rake out a compacted area, depending on its size.

“Field walks are your best defence against problems that are going to become larger problems and require repairs.”

Keep a history log
By keeping a log of trouble spots found and repairs that have been made, maintenance programs can be modified as the turf gets older, he said.

With aging systems, adhesives start to fail, leading to seam separation. The edges and corners of the turf begin to fold up as a result. A temporary fix for a partial seam separation is to vacuum underneath it, allowing the turf to relax and settle back in place. A wet-dry vacuum works well, but needs to be emptied before use so that the collected infill material remains intact and can be replaced.

As the turf gets older and more trod upon, the infill becomes more compacted and the fibres get trampled and knocked over, requiring remediation. Causes of compaction include regular game play and practices, post-game celebrations and other events taking place on the field. Additionally, heavy equipment needed to pull groomers need to be on the field.

The long-term implications of widespread infill compaction include poor playability of the field with inconsistent ball roll and poor traction among athletes, monofilament fibre damage, increased costs due to early replacement of the field and disposal fees, and injuries and litigation.

Grooming of the field fights widespread infill compaction and maintains playability and safety. While grooming, Lawrie suggested equipment operators “look, listen and feel” for possible problems that might arise. They should look for ripples in the turf, listen for changes in engine rpm and feel for “jackrabbiting” of equipment and the pulling of implements to either side.