A fixture within the Ontario turfgrass industry for almost 25 years has called it a career. Pam Charbonneau, turfgrass specialist with the Ontario Ministry of Agriculture, Food and Rural Affairs, retired from her position on Jan. 30.

Charbonneau, 60, took over the position in November 1991 from Annette Anderson, who was first to assume the newly-created designation two years previously. Anderson remains employed by the ministry, having moved up in the ranks over the years. 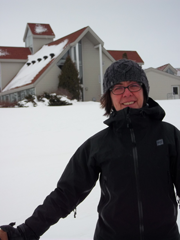 For Charbonneau, turfgrass was never her area of expertise when she was poised to succeed Anderson, and she found she had to learn about it quickly. A well-rounded horticultural and agronomic background, however, helped to smooth the transition.

After graduating from the University of Guelph, she began her career as a research technician with the university’s then horticultural science department—a position she held for four years. While engaged as a research technician, she acquired her masters degree in vegetable breeding on a part-time basis. That led to a three-year stint in the seed industry as a canola breeder. Her career switched gears again when she entered the world of greenhouse sales, working for a supplier of products to the greenhouse industry.

She quipped it wasn’t long before she realized that sales weren’t her calling and learned about a contract position for a turfgrass extension specialist that had become vacant. Anderson was moving on to become manager of a group called greenhouse and specialty crops, and Charbonneau was awarded the vacant position.

For the next while, Anderson’s contracts as a manager continued to be extended, and so were Charbonneau’s. Eventually, Charbonneau had to compete for the position until it became hers.

There is no immediate plan by OMAFRA to replace Charbonneau as turfgrass specialist. If the position is to eventually continue, a business case will have to be put forward to senior management. A case must be presented to indicate there is a real need for the position to continue, and the decision will be left in the hands of management. For now, there is nothing on the table.

Charbonneau, whose title has changed over the years from extension specialist to turfgrass specialist, said what she will miss most about her job is “the people.”

“I feel everything I’ve done, whether it’s the OTS (Ontario Turfgrass Symposium) or the research projects I’ve done, I just had such great colleagues, and I can’t imagine doing what we did without their involvement.”

Many of those she has worked with have been colleagues for the past couple of decades, including Dr. Ken Carey, a research technician in turfgrass management at the Guelph Turfgrass Institute, whom she calls “a gold mine” due to his vast experience.

She said the staff at the GTI have been invaluable as co-workers over the years, and she praised the support of such colleagues as Dr. Eric Lyons, Dr. Katerina Jordan and Dr. Tom Hsiang of the University of Guelph.

Charbonneau also cited Dr. Michael Brownbridge, research director at the Vineland Research and Innovation Centre, with whom she had been collaborating since 2009 on biocontrol of insects.

Insects, she said, have been her passion over the years.

Shortly after she began as turfgrass specialist, European chafer grubs had become a large problem in the industry, especially on golf courses.
“I focused a lot of my efforts on the European chafer and really got to love turf insects.”

In the late 1990s, another new invasive insect species made its presence in Ontario—the European cranefly.

“It was maybe not fun for turf managers to have a new insect pest, but it was fun for me because it was something to research and find out about its biology and figure out how to control it.”

For several years, Charbonneau has been teaching about insect pests on turf at the University of Guelph’s popular turf managers short course, and will continue to do so during her retirement.

“I enjoy that part and am glad I’ll be able to keep doing it.”

The short course is offered each winter and remains a popular program with a continuously steady demand for its limited enrolment. Most students are already involved in the turfgrass industry and are looking to add to their credentials to move up in the ranks and perhaps one day become a superintendent. Other students, however, have entirely different backgrounds and are looking for a career change.

Many municipalities see the value in sending some of their employees to take the course for upgrading purposes, and several industry suppliers find the course constructive if they are moving from agriculture to turf or are looking to hone their technical skills to match their sales skills.
“It’s a great opportunity for a crash course,” Charbonneau said, adding she gives her older students a lot of credit for taking the course when they have been out of school for so long.

Charbonneau said her main role as turfgrass specialist was to provide technical information to turf managers in Ontario, whether they were in the lawn care, sports turf, golf or sod-growing sectors, and to other industry stakeholders such as suppliers.

It was challenging, she said, to stay on top of all the changes going on in the turf industry.

“The nice thing about being right here at the Guelph Turfgrass Institute was that I could really have my finger on the pulse of the research going on here.”

Her involvement with the Crop Science Society of America was also instrumental in helping her to stay on the top of the curve, she said. The organization’s turfgrass division annually conducted a four-day meeting which was completely devoted to turf research.

Charbonneau said her early years on the job involved a lot of on-site visits with turf managers to discuss pertinent issues. As the electronic age progressed, however, she took to Twitter, electronic newsletters and blogs to share information with the industry.

A career highlight of hers was to “jump in” when the Ontario cosmetic pesticide ban was coming into effect, and to quickly evaluate alternative products for their efficacy to provide independent, third-party data on those products.

The pesticide ban also proved to be a challenge, she said, especially when dealing with the lawn care industry.

“It was hard to get up and say to them that these are the products you can use, and they don’t work as well.”

Another career highlight was her involvement in Canada playing host to the International Turfgrass Research Conference in 2001. The suggestion for Canada to host the conference was made by some speakers at the OTS whom Charbonneau had lined up. Once the idea got going, she said she garnered valuable mentoring from the International Turfgrass Society and became its president leading up the conference.
“This brought awareness worldwide to what was going on inâ€ˆCanada, and more specifically at the Guelph Turfgrass Institute.”

Charbonneau said she found the experience to be personally rewarding, and praised the efforts of the GTI staff and such luminaries as former Ontario Deputy Agriculture Minister and Ontario Agricultural College dean Dr. Clay Switzer and former University of Guelph soil sciences professor Dr. Robert Sheard whose support ensured a successful conference.

For 23 years, Charbonneau played an active role in helping to organize the annual Ontario Turfgrass Symposium. Her key task was to line up the various speakers for the event’s education sessions, a job she continued to do through this past February’s symposium. She worked with an OTS executive committee which had representation from Sports Turf Canada (formerly the Sports Turf Association), the Professional Lawn Care Association of Ontario, the Ontario Turfgrass Research Foundation and the Nursery God Growers Association of Ontario. Each of the groups provided her with suggestions for informative speakers.

Earlier in her career, the Ontario Golf Superintendents Association was another key member of the OTS, but withdrew its involvement several years ago.

“We had to reinvent ourselves, and how we did that was we focused on education. We came back to the university where OTS in its early years started.”

The OTS had moved to Toronto during the second half of the 1990s.

One of Charbonneau’s final duties as turfgrass specialist was to complete a publication called “Integrated Pest Management for Turf” for which she served as editor. Collaborating with her on the project as contributing editor was Hsiang. The publication was released in January and is available through OMAFRA’s website at http://www.omafra.gov.on.ca/english/crops/pub845/p845order.htm .

Among the issues the industry will continue to deal with include water usage and nutrients, she said. Water as a valued commodity had been an issue from the time she started as turfgrass specialist, but has since come more to the forefront.

“Water is just so cyclic that we have a dry year and everybody is concerned about it, and then we get three or four years where it’s not an issue. Because of that, the kind of research that is needed really hasn’t been done.”

Several U.S. states have imposed restrictions on phosphorus when it’s to do with fresh water and nitrogen restrictions with salt water.
“We’ve been able to keep doing what we’ve been doing so far, but I don’t think that will last forever.”

Fertilizer companies in Canada have already been proactive and have taken phosphorus out of a lot of their fertilizers, she said.

As a government employee, Charbonneau said she felt fortunate to have had a positive experience on the job, noting many government workers express the opposite experience.

“I’ve always felt to have incredible support from OMAFRA, the managers and pretty much all the way up the chain of command, especially at the manager and director level.”

Charbonneau said if she has one regret about her career in the turfgrass industry, it’s that, as a woman, she is part of a minority group.

“It’s just more that it gets lonely sometimes (being among few women in the industry). I never really felt I wasn’t respected because I am a woman, but it would be nicer to see more of them around the table at meetings and so on.”

She said she has tried to be a good role model for women and to be as professional as possible, but added it’s “sad” the industry is so male-dominant.

Getting used to retirement hasn’t been that easy so far, Charbonneau said.

“It’s hard to turn your brain off and not think about turf.”

She said she often feels the need to tweet or blog about something, adding she will have to “wean” herself off such temptations.
GTI director Rob Witherspoon has agreed to continue with Charbonneau’s blogging.

As for her retirement plans, Charbonneau speculated there will be some upcoming travel, but added she prefers active holiday experiences which involve hiking or biking. She also enjoys cross-country skiing, yoga and teaching tai chi.

Playing more golf is another possibility, she said, as long as she is able to focus more on the game and less on the playing surface. She suggested she was a “hazard” when playing the game in previous years because if she spotted something awry, she would feel the need to investigate the reason and forget all about playing the game.