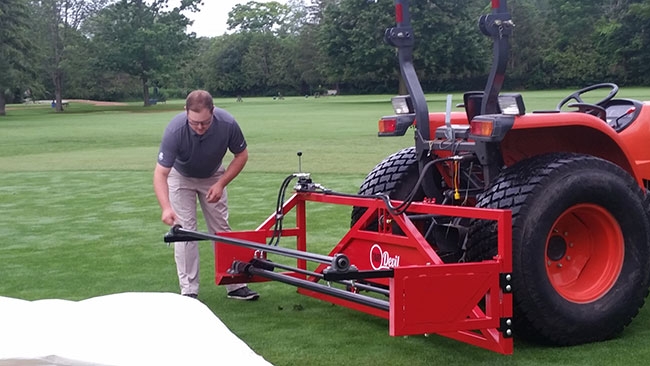 An assistant golf superintendent has come up with an idea that simplifies the deployment and collection of turf covers, reduces the amount of labour involved in their implementation, and significantly extends their shelf life.

TarpDevil is the brainchild of Jordan Kitchen, assistant superintendent at the Hamilton Golf & Country Club, who began to think there had to be a better way of putting down covers, rolling them back up again and storing them during the playing season. He had become accustomed to the standard practice of being among eight to 12 people who would roll out, unfold and tack down covers to protect greens during the winter months and then rolling them back up again in the spring and storing them for another year. It was a labour intensive process that often proved challenging.

“Rolling them up and collecting them in the spring was a lesson in and of itself,” he said.

Many golf courses in Canada use turf covers to protect their greens from winter injury. The polar vortex of 2014 that hit Ontario and Eastern Canada reminded several superintendents of the value of covers after many courses with predominantly poa annua greens suffered extensive ice damage and death.

Kitchen said Hamilton experienced about 70 per cent turf loss that year. Not wanting the calamity to repeat itself, the club’s membership was told that solid covers were the answer to more effective winter protection.

Putting the new covers out for the first time was a relatively easy process because they were dry, Kitchen said, but collecting them afterwards and storing them would be another story. Weighing about 300 pounds apiece when spring moisture was factored in, repeating the process of deployment and collection each fall and spring left Kitchen contemplating a more effective means to put down covers and roll them back up.

After doing some research online and discussing concepts with the team at Hamilton, an idea for a hydraulically-driven attachment that could be affixed to the back of any tractor came to bear. From there, he asked an engineer friend to listen to his idea and conceive a workable design. Ian Trepte, a friend of Kitchen’s since their childhood, put his engineering expertise to work with some CAD (computer-aided drafting) designs that led to the development of a prototype.

“He came down and drew it out, and that was the beginning of TarpDevil.”

“That’s the value that Ian brings as an engineer. He’s very familiar with how you develop CAD drawings and welding assemblies.”

The attachment is constructed of two-inch-square tube steel and plate, cut to size and welded together. Kitchen said the goal was to minimize the number of materials needed, adding Trepte’s professional expertise ensured their objective was met.

“It’s a simple concept that achieves a great purpose. That was really one of the goals we had in mind when we designed the unit. We wanted it to be structurally strong, but we didn’t want it to be too heavy or too complex. We wanted it to be functional and durable.”

Video on Internet
The introductory product video to demonstrate the efficiency of TarpDevil was posted to TarpDevil’s website and then on Twitter, “and the response to that prototype was absolutely overwhelming.” Kitchen said it generated about 14,000 impressions and 9,000 engagements, plus several “likes” and re-tweets.

In addition to the promotional video, the TarpDevil was also demonstrated at the Ottawa Valley Turfgrass Association’s annual golf tournament.

TarpDevil attaches to a tractor’s three-point hitch and runs off its hydraulic system. Kitchen said the design concept was purposely tailored with a light weight in mind. Because greens are the most valuable surfaces on a golf course, it is important that minimal weight be placed on them and their surrounds, especially in the spring when they are traditionally wet. He said he and Trepte – who holds the title of vice-president of engineering – designed the unit so that it could be mounted to tractors that, outfitted with turf tires, would leave a lighter footprint around the putting surface.

“You don’t have to have a certain size tractor to use the TarpDevil. It works on every modern tractor.”

Most golf courses have a least one tractor among their fleet of equipment, he said, adding adapting it for a three-point hitch mount and run off the machine’s hydraulic system made a lot of sense.

Currently, the system is designed with a six-foot width for rolling covers, but efforts are underway to produce a 10-foot and 20-foot configurations.

“I’m convinced the unit will work for other applications (besides golf),” Kitchen said. “But if someone so chooses, it can be offered in 10-foot and potentially 20-foot options. We’re working on those solutions now.”

The wider options are designed with agriculture and sports field applications in mind.

With TarpDevil’s original design, Kitchen said a cover is folded to six feet in width, placed on a spindle and held in position with a pinching arm. The roller of the Tarp Devil allows the cover to be off the ground, acting as a squeegee to extract moisture from the tarp and enabling it to be rolled up into an air-tightened, compact package for easier storage.

“All of those things add to its useful life.”

Rolling up covers manually, especially those upward in size of 60 feet by 100 feet, is typically a daunting task. The covers are usually cold, wet and heavy in the spring, and workers are on their hands and knees, shoulder to shoulder, rolling it up after it has been folded into a six-foot width. Kitchen said as the rolling process moves further along while a cover’s bulkiness increases, workers start to “huff and puff” and experience slippage while trying to achieve a compact bundle.

By using the TarpDevil, the number of people required for the collection process can be reduced to about six or seven, Kitchen said, instead of upward of 12 people. It allows the process to be performed by two crews. One will un-tack the covers and fold them up to the proper width while two individuals can operate the TarpDevil to roll them up into a more compact size for storage.

The rolling process, when done manually, is the most labour intensive part of the process, Kitchen said.

Invention saves money
Based on data he and the shareholders have, a golf course with 18 covers (or 19 with a practice putting green) can save between $1,200 and $2,000 per collection or deployment by using the TarpDevil.

“You can use the unit to collect covers, but you can also use it to deploy them.”

Kitchen said the TarpDevil is gentler on covers because it allows them to be rolled up more evenly, and they are tighter and easier to manage, contributing to a cover’s effective, useful life. When folded up manually, covers tend to be bulky and can often snag on other things when stored. He estimates the life expectancy of a cover can be extended by about 20 per cent when using the TarpDevil. When the labour savings is factored in, the unit provides good value, he added.

“We’ve had an overwhelming response to the video and to the concept. People can really see how it improves their lives and their operations. If I can do something that makes the lives of those employees and superintendents in the industry better, and I can bring value or improve the process to someone else, then that makes me happy.”

The TarpDevil is patent pending. Kitchen is also working with an intellectual property lawyer, and the brand name has become trademarked.

“Our lawyers worked really hard with us to get us to that stage.”

He and the shareholder group are also in the process of establishing distribution partners in both Canada and the United States.

“One of the things we’re proud to say is that this is a Canadian product.”

Among the university courses he studied at the University of Guelph in his pursuit of his masters degree was one on sustainability “which is a really hot topic now.” Kitchen said when ideas are created that make people’s lives easier and processes more efficient, they become popular and significantly change the marketplace.

“In that vein, I think TarpDevil has a very sustainable approach to improving operations for farmers, sports fields managers and golf courses.”

Kitchen estimates he has spent an average of 15 to 20 hours a week of his own time with TarpDevil, dating back to March, but added he’s had “a lot of fun” doing it. He credits John Bladon, a mentor of his, and Bladon’s Chimera Group for their help in commercializing the concept, marketing and channel development, and collaborating on a plan for TarpDevil.

“He (Bladon) was the guy who planted that seed in my mind.”

Kitchen said he was raised in an “innovative, industrious and entrepreneurial” family. His stepfather is a cash crop and dairy farmer who insisted his children try their hand in another field before following his footsteps in agriculture. Heeding that advice, Kitchen began working at Century Pines Golf Club in Troy, Ont. at the age of 16, pursuing his love for the outdoors.

“That’s when I fell in love with golf. I didn’t come to this industry because I was a golf buff. I came to this because I love the outdoors, I like the people, and then I came to love the game.”

After finishing high school, he studied political science in Ottawa before returning to Century Pines. In 2011, he completed the turfgrass managers’ short course at the University of Guelph and then took the university’s diploma course the following year. For his internship, he applied to both the Hamilton Golf & Country Club as well as a golf course in China, but Hamilton superintendent Rhod Trainor was the first to respond with an offer.

Today, he is only a few credits shy of attaining his master’s degree with a specialization in food and agri-business.

BrettYoung has partnered with TarpDevil in British Columbia, Alberta, Saskatchewan and Manitoba while Turf Care Products Canada will look after the Ontario and Quebec markets.

“We are thrilled to forge partnerships with progressive industry leaders in BrettYoung and Turf Care Products,” TarpDevil president Jordan Kitchen said. “They have long standing reputations of serving their clients with best-of-class solutions and we couldn’t think of better partners.”

Travis Unger, vice-president of professional turf and reclamation for BrettYoung, said, “BrettYoung has always sought to bring leading solutions to its customer base, and this solution-based and Canadian-made innovation is something we are now proud to represent in Western Canada.”

“I couldn’t be more pleased to announce our relationship with this innovative company and product. Turf Care has always sought to bring leading-edge solutions to its customer base, and TarpDevil fits that description flawlessly. We are proud to add this unique and Canadian product to our distribution portfolio.”

The first of its kind, TarpDevil reduces the burden of collecting and deploying covers on the golf course and in the sports turf and equestrian arenas. The tractor-mounted, hydraulically controlled cover management system significantly reduces the labour required to manage tarps in the spring and fall.

TarpDevil’s offices and manufacturing facilities are in Puslinch, Ont.

BrettYoung is based in Winnipeg and produces forage and turf products that serve domestic and international markets around the world.

Turf Care Products Canada is based in Newmarket, Ont. with offices in London, Milton, Scarborough, Ottawa and Montreal, and is a leading supplier to golf courses, municipalities and landscape contractors.