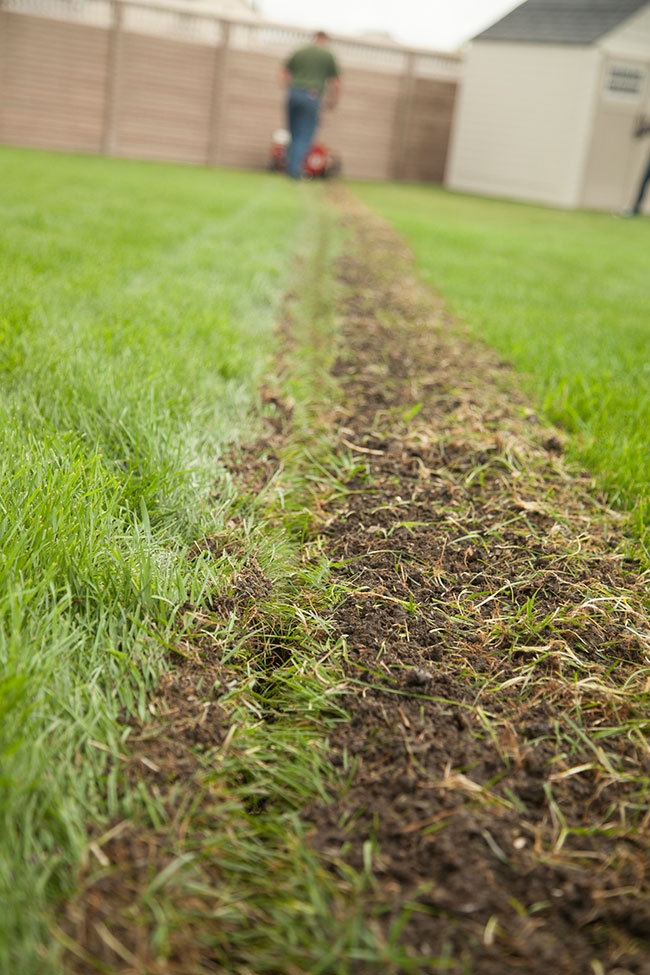 With the help of the trencher, crews can turn what would otherwise be a two-day job into one that is six to eight hours.

Every day we benefit greatly from the precision achieved when professionals use tools designed specifically for their jobs. Surgery, for instance, would be far more risky and leave less than ideal results if surgeons did not have some of the sharpest scalpels in the world that allow them to work with extreme precision.

Installing landscape irrigation lines is a similar endeavour, albeit less life threatening. When it’s done with the best tools around it can deliver extremely precise and high-quality results, saving customers and contractors from headaches and labour costs.

Bill Waltz is no surgeon, but he and his crew at Green Oasis Irrigation in Tomball, Texas, know firsthand that using the right tools for the job can have a huge impact on success. Waltz owns Green Oasis, and he and his crew install and service sprinkler systems in the state’s southeast. The task involves digging trenches as narrow as one inch, as deep as eight inches and, in some cases, hundreds of feet long for placing irrigation lines. When he first started the business, it wasn’t always as easy as it sounds.

An unexpected business partner
“One of my good friends and I were looking to keep ourselves busy one summer while we were home from college,” Waltz said. “When I saw a few guys installing a sprinkler system at the house across the street, I knew that was the ticket to passing time while earning some money.”

After some research and trips to the hardware store for supplies, he and his partner were in business and ready for their first project: installing irrigation lines at Waltz’s childhood home where his parents still reside. After that first successful install, he and his partner hit the pavement, posting fliers to drum up business. Their efforts proved successful, but as the number of projects grew, their faith in their methods diminished.

“We started out using trenching shovels, which certainly got the job done, but our bodies paid the price,” he said. “They also didn’t leave the type of results we wanted to give our customers.”

Trenching by hand is not only a laborious process, but time intensive as well. In addition, the process greatly disturbs the soil, so customers had to wait as long as two months before their yards were back to normal.

“The longer soil and grass is left out of the trench, the more it dries out and the longer it takes for that area to heal once material is put back,” Waltz said. “If that’s our only option, that’s one thing, but we knew there had to be a better way.”

A visit to the local rental shop proved them right.

There it was: a 2.5-by-five-foot piece of equipment that, at the time, Waltz had no idea would have such a hand in shaping his business. It was a Little Beaver Kwik-Trench mini-trencher – a gas-powered machine that slices through soil, leaving trenches as narrow as one inch and as deep as 12 inches.

“Up until then our only power trenching options were large models that would have destroyed lawns,” he said. “They were overkill for what we needed.”

He added that many customers hear the word “trencher” and envision the lawns they work so hard to maintain turning into a dirt-filled warzone.

“That image isn’t too far from reality if you use larger trenchers. We knew we had to have clean, narrow trenches that could minimize cleanup time and deliver better results for our customers. The mini-trencher was our best option.”

Over the next few years, as the business got off the ground, Green Oasis rented the mini-trencher for nearly every irrigation project. The unit cut trenches as quickly as 30 feet per minute and its carbide tipped blades rotated as fast as 800 rpm, delivering clean and precise results.

“Compliments started rolling in on the finished yard – a benefit we only could contribute to the Kwik-Trench,” Waltz said.

The team of two quickly realized that what started as a way for quick cash on college breaks, had developed into a thriving business opportunity. As soon as they had the funds, they purchased the trencher.

With the help of the trencher, crews can turn what would otherwise be a two-day job into one that is six to eight hours.

The sharpest tool in the shed
And the rest, as they say, is history. That was nearly 28 years ago and since then Waltz’s partner has gone his own way while Green Oasis has grown to 10 installers and two mini-trenchers working year-round to service customers. He also continues to get rave reviews.

“The mini-trenchers have really made our business stand out amongst the competition,” Waltz said. “I’ve had customers arrive home and think we hadn’t completed the job because the yard looked undisturbed. Clients have also been pleased with how fast their yards are back to normal.”

The trencher deposits soil on one side of the trench, which makes backfilling easy and fast, allowing the area to heal quickly. The subsequent customer satisfaction helps fill much of Green Oasis’ business, which primarily comes from referrals.

But clients aren’t the only ones pleased with Waltz’s approach to digging trenches. His employees are also happy.

“I’ve had some of my guys say if they had to dig by hand they wouldn’t be working for me,” Waltz said. “Ergonomics is starting to play a big role in employee satisfaction, and rightfully so. We’re not young forever.”

Operators walk behind the unit while pushing forward, which is not only easier than larger trenchers that operate by pulling the unit backward, but it’s also safer. Green Oasis’ mini-trenchers are also relatively lightweight and easy to manoeuver.

In addition to safety and ergonomics, the units have also boosted profits for Green Oasis.

“It’s simple because we can cut trenches faster, we can complete projects more quickly, which means we can take on more than what can be achieved with hand digging,” Waltz said.

He noted one of the largest projects his crew has completed with the mini-trenchers included installing irrigation lines on a three-acre property outside of Tomball.

“It took us four days to complete the job, one of the longest projects we’ve worked on. But if we had hand dug the trenches it would have taken us almost two weeks,” he said.

That efficiency continues to pay even on the day-to-day projects, turning what could be two-day projects into six to eight-hour jobs.

Not only has efficiency played a role in the company’s success, but having quick and timely parts support has also helped Green Oasis stay on top of profits.

“We bill per project rather than hourly so if we had to wait for parts to arrive it could really eat into our profits,” Waltz said. He can get the parts he needs within a few days.

“I’m not sure why some contractors still choose to hand dig their trenches, but for us it’s a no-brainer,” Waltz said.

Having the right tools for the job is smart. Just like the surgeon with his instruments, a contractor with his mini-trencher is poised to operate with extreme precision to deliver fast, high-quality results. And it’s all in the name of saving. Whether it’s rescuing clients from an unsightly yard or saving a contractor time, hassle and labour costs, the right tools pay.