THEREâ€ˆare many advantages to treating water for use in irrigating golf
courses, perhaps the most significant of which is a substantially
reduced chemical budget.

Jeff Rigney of Cangrow Inc., who has more than 14 years of experience in the fertility business, outlined the concept of water treatment and its advantages to an audience of superintendents gathered in February at London, Ont.’s West Haven Golf Club for the Greater London Association of Golf Superintendents’ (GLAGS) winter turfgrass seminar. 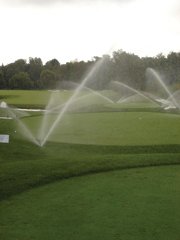 “What water is, the soil becomes,” he said.

Citing two types of water—taking water and giving water—Rigney said one is the opposite of the other. Taking water is generally high in bicarbonates and high in pH. As it makes its way down through the soil, it strips away nutrients’ availability to the plant. Giving water, however, is low in bicarbonates—if it has any at all—is low in pH, and tends to open the soil up to allow nutrients to be taken up by the plant.

Illustrating the comment about what water is, the soil becomes, Rigney said a USGA-specification green grown with an 80-20 mix, ideal pHâ€ˆlevel and enough organic matter to hold the moisture and nutrients that allows the plant to grow is added its greens mix, is seeded, and everything is nicely progressing until it is irrigated. Suddenly the turf isn’t growing the way it should be and it’s continually under stress. The soil is tested, indicating nothing has changed, but then the water is tested.

“Your water is hard, it’s high in pH and high in bicarbs. It’s what’s influencing that plant, not the soil.”

Generally, both analyses will do the same thing, Rigney said, even though they’ll react differently in colder temperatures.

“But they pretty much do the same job at the end of the day.”

Rigney said any time is right to test irrigation water to determine if it needs treatment. Superintendents who are unsure about whether or not their water requires treatment can obtain a water profile by testing each month once irrigation begins. Even if water is treated with urea sulfate, it’s still advisable to test a few times each year, he said, targeting the early spring, at the height of mid-summer stress, and when rain begins in late summer or early fall.

Treated water will produce a colour difference, spur lots of growth and increase the plant’s health.

“Your need for fertility will drop considerably when you first start.”

Once a superintendent becomes used to his water treatment, which is apt to differ from course to course, he can then determine when to bring his fertility back. In heavy pushup soils, it can be up to two seasons that a superintendent hasn’t used a lot of fertilizer. Fertilizer that has been bound in the soil is being used for the plant. In sand situations, a few weeks or a few months may be all that elapses when little fertilizer is used.
When treating water intially came into practice, it’s biggest selling point was that it saved money on fertilizer.

“It really doesn’t,” Rigney said. “Your fertilizer practices will change because you’re using fertilizer in a different way when you treat your water, but, at the end of the day, your budget will pretty much stay the same.”

The savings will come with less chemical. Rigney said that’s because treated water enables nutrients bound for long periods of time in the soil to be taken up, thereby strengthening the plant and allowing it to resist more stress. The strategy saves superintendents from having to spray chemicals in certain situations when they might have done it before.

In 10 years of recording data from the use of treated water on golf courses, an average savings of 20 to 30 per cent in chemical expenditures has been realized in the first full year of irrigating from tee to green.

“Once things taper off and you understand what’s going on (within a time frame of two or three years), you’ll find your chemical budget will drop an average between 40 and 45 per cent and stay there.”

Rigney said many of the chemicals superintendents traditionally use are designed to be used with water at a specific pH level. To achieve the desired pH, he said to strip, test the water, put in an acidic buffer, test again, and, when the level is optimum, put the chemical in. The strategy will achieve maximum results vs. applying chemical using water with an inappropriate pH that will likely result in a rapid wearing off of the chemical’s efficiency, he said.

Rigney cited an example of using treated water vs. untreated water at a newly-sprigged golf course. The course had two pump stations (one for each set of nine holes) and, although the first nine holes used treated water, the second nine went with untreated water due to the late delivery of necessary equipment. He said the difference in the quality of turf was like night and day.

If a golf course is on the program and has already gone through a season when suddenly there is an equipment malfunction or product hasn’t been received on time, and it may be a couple of weeks before water can be treated again, the course is likely safe, Rigney said. When water is treated, its bicarbonates are being lowered along with the pH, and nutrients are being released in the soil.

“Even though hard water is coming back onto your course, you’ve opened up that soil enough to give you a bit of a window. Course to course, it might change, but normally in a week or two you’ll be fine.”

Golf courses located along the Highway 401 corridor in southern Ontario tend to show high calcium analyses in soil reports, Rigney said. When using urea sulfate, some of that calcium is freed up, making available gypsum in the lime as well as freeing up some of the bound calcium in the soil which helps superintendents supplement through stress periods, knowing that some plants are getting that calcium. Using treated water helps in that regard.

The price per litre of treated water can run between $1.55 and $1.65, depending on volumes. Additional costs include the necessary equipment and installation.

Containment issues are also important, Rigney said. When urea sulfate is received, it normally arrives in totes which is not an ideal storage containment system. They are generally thin-walled, don’t fare well under ultra-violet light, and can easily sustain cracks leading to leaks if they are knocked around. It’s best the product be transferred into tanks, even though an added expense will be necessary, but it will be less costly in the long run.

Treated water will produce the same reaction as rainwater would, unlike chemically-treated municipal water which is usually higher in pH.

Superintendents interested in using treated water on their golf courses will find the expenses incurred will be paid back in chemical budget savings, Rigney said, adding results will “definitely, definitely” be seen.