Features Golf
Transitioning from assistant to superintendent; moving up the managerial ladder 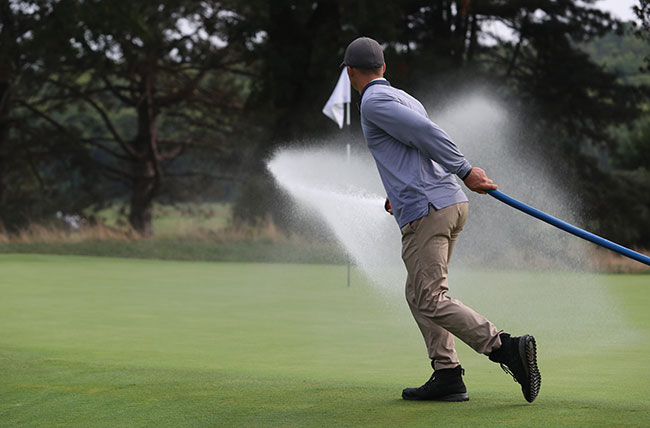 Getting their “hands dirty” as an assistant superintendent is a prerequisite toward advancing to the position of superintendent. Photo credit: Ron Alvey/Adobe Stock

Graduates of post-secondary turfgrass management programs aspiring to work in the golf industry typically set their sights on becoming golf course superintendents one day. Starting their careers as assistant superintendents, it may take them anywhere from a few years to several years before they’re ready to make the leap to superintendent.

Several factors can influence the rate at which assistants are ready to make the transition, including their accumulation of experience, their ability to lead and direct others, their familiarity with the golf course and its specific needs, and their own level of confidence.

Kitchen began working at the Ancaster, Ont. private club in 2012 during an internship while studying at the University of Guelph. Now in his 10th year at the club, he was named interim superintendent in 2019 before officially becoming superintendent the following season.

Rumohr gained a wealth of experience as an assistant superintendent at two Alberta golf courses. After climbing the ladder at an Edmonton-area course, she became the assistant at the Edmonton Petroleum Club – a position she held for 10 years before taking over as superintendent last year at Woodside.

Sheridan, a native of Ireland, completed internships at Muirfield Village Golf Club in Ohio and the Bay Hill Club in Florida before working at the Seymour Country Club in Vancouver in 2013. At the end of that season, he became second assistant at Capilano. Over the next five and a half years, he ascended to assistant superintendent before his promotion to superintendent in 2019.

Creamer, who has worked in the industry for 25 years, is a second-generation superintendent. After serving nine years as assistant superintendent at the Victoria Golf Club, he took over the superintendent’s position at Olympic View in 2021.

What is the biggest challenge you’ve faced since becoming a superintendent?
Kitchen: Bridging the gap between having the necessary skill set and convincing a club’s board and its members that you’re the right person for the job, because you know the operation and are well developed, is challenging, he said.

“Figuring out how to bridge that gap when the opportunity arises, that’s a difficult thing,” he said, adding there was a time when a university graduate would be an assistant for two or three years before becoming a superintendent. Today, however, assistants can spend 10 to 15 years at more than one club before becoming a superintendent, he noted.

Rumohr: “For me, the biggest challenge was wrapping my head around relocating.”

Having lived in Edmonton for 20 years, she had established roots and a support system in the city. Relocating to Airdrie – about a 2½-hour drive from Edmonton – meant losing that support system.

Sheridan: His role as superintendent began as an interim position, giving him a year to prove he was right for the job. He had already been at the club for five years, was familiar with the property and its processes, and had come to know his team, the club’s senior management and several of its members.

“I think the challenge I faced when that happened was that I was inheriting a really strong team, and the golf course had been looked after to the highest level.”

He noted his three predecessors were highly regarded in the industry.

“That was definitely a unique challenge for me – taking on that interim role to add to the legacy that those gentlemen had here before me.”

Do you have a mentor? If so, why is he or she so influential?
Rumohr: Several people have influenced her career, she said, adding it’s important not to be afraid to ask others for help when it’s needed.

Kitchen: Having a variety of mentors is beneficial, he said, citing his have included other superintendents, general managers and industry suppliers.

“It’s good to be able to pick their brains. As you continue to develop in the industry, you tend to collect more people to bend their ear and to get unique and different perspectives.”

“They’re invaluable to your success.”

Sheridan: Although he said he has no one specific mentor, there are many in the industry whose conversations he values.

“The great thing about the industry and the network in general is getting that help and advice and having those conversations with people who have gone through the same thing.”

What is your leadership style?
Rumohr: “I do my best to lead by example. There’s no job I’m not willing to do.”

She said she likes to put in face time with her crew and those around the clubhouse.

“I’m an easy person to talk to and I can offer a lot as to what their problem might be.”

Creamer: Adopting a hands-on approach with the team at Olympic View is a winning formula, he said. Some team members may wish to continue working in the industry and making their way up the ladder. Creamer likes to impart certain skills they might find helpful on their career paths.

“I look back at my 25 years in the industry and look at the skills that I’ve learned on the golf course and how I can transfer those and how that shaped me as a person. Whether it’s hard work and determination and seeing the job through and taking pride in your work, they’re all great things, and showing that to team members and seeing that from them gives me the energy to keep going everyday out there.”

Sheridan: Being approachable, inclusive and supportive are important attributes of a superintendent, he said, adding he strives to develop everyone who joins the team, including support staff and seasonal college and high school students. He also tries to keep all staff informed about matters taking place at the golf course.

“If everyone has more of an idea of what the bigger plan is, I think everybody buys into it a little more and cares more about what we’re trying to achieve as a team.”

If you were an assistant for a long time, how did you stay motivated and keep your eyes on the prize of becoming a superintendent?
Kitchen: “There was never a moment when it was a sure thing.”

Working hard is his nature, he said, adding he stays motivated by working at places where he’s engaged, challenged and pushed by others. Being surrounded by friends, mentors and others who wish the best for you is key, he added.

“You need to work for someone who sees the potential or sees that pathway and then challenges you to be a better manager, a better turf manager and a better leader.”

Rumohr: “I was fortunate to work for a superintendent who gave me all kinds of opportunities to get experience with whatever part of the operation I desired. I asked lots of questions.”

She said she sought personal development outside of work through continuing education and took measures to ensure community became an integral part of her life.

Sheridan: “This is a career and an industry where you’ll never be an expert and never have all the answers to everything. You’ll never know all the ins and outs of every different facet of our industry.”

He said this includes both the technical and personal sides, adding it’s important to have the approach or attitude “that you’ll never know everything.”

Creamer: Education was his motivation, he said. In 2013, he attended his first Golf Industry Show conference and began his strategy toward becoming a superintendent. He said that following his educational pursuits kept him focused on not only turfgrass, but other interests.

What was the hardest thing you found about the transition of going from assistant to superintendent at the same club?
Sheridan: Acquiring a team that was already “very well oiled” was a helpful start, but his goal was to continue with the club’s productive operations and see where improvements could be made. The challenge, however, was dealing with a workload that included both daily operations and long-term planning, he said.

“It was also eye opening with regard to some of the things I didn’t know about the role, even though I was preparing for it.”

Kitchen: “I was really fortunate that the club began the conversation about succession and succession planning,” he said, adding the club was planning for a Canadian Open at the time. Originally, the club wasn’t sure if it wanted to look outside for a successor to the retiring Rhod Trainor or promote someone from within. Kitchen said he was given every opportunity to become involved.

“When the day finally came, you always think you’re ready, but I’m not sure if you can ever be entirely prepared.”

“We had a great team in place with people who have been here for years. They were very welcoming. The transition to the club itself was simple. I leaned heavily on the people who were in place to get my feet on the ground and get going.”

A challenge she faced almost immediately was having to hire a new assistant, but she found “a great one.” The golf course opened for the season a month after she began, but the transition “flew by in the blink of an eye.”

Creamer: Like Rumohr, he was tasked with finding a new assistant shortly after taking over as superintendent. His search paid off handsomely.

“He’s not only technically sound, but he’s also a good people person. I needed somebody who is great with the team, wants to build a team, wants to learn and is passionate about the industry.”

Many of the challenges he faced were based on his own expectations.

“There’s a reason that you got here, there’s a reason why they hired you, and those are the reasons you’ll be successful here. Trust yourself and move forward.”