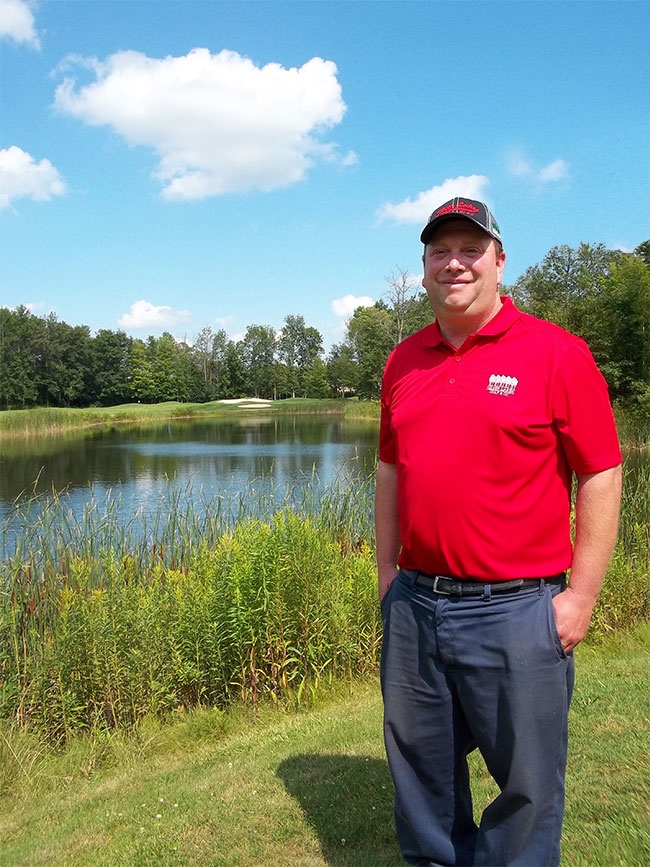 Greg Strachan has been superintendent at Silver Lakes Golf & Conference Centre since 2008.

Tucked away at the end of a dead-end road in East Gwillimbury, Ont., yet easily accessible to golfers in and around the Greater Toronto Area, is an 18-hole golf course ready to celebrate its 25th anniversary that is known, among other things, as a facility boasting an aquatic driving range.

The Silver Lakes Golf & Conference Centre, which dropped the “country club” moniker in 2011 in favour of the more marketable “conference centre,” more recently earned the accolade of being named by Score Golf magazine as the fourth best-valued golf course in Ontario.

Superintendent Greg Strachan said a number of improvements have been made to the golf course since his arrival there in 2008, contributing to both the quality of the property and the golfer experience. Silver Lakes’ drainage, for example, had always been good beforehand, but has since improved significantly and was put to the test this season during a much wetter-than-expected year.

“A dry year is a good year for this place,” he said. “A wet year is a challenging year.”

Parts of the golf course were under water last spring after the East Holland River flooded over. Excessive moisture contributes to disease pressure and other challenges.

Fairways are mainly crowned to promote better drainage, and cart paths on both sides of the fairways help alleviate the amount of vehicle traffic on the playing surface, especially when it’s wet.

Although Silver Lakes’ irrigation system is largely original other than having a mixture of old and newer sprinkler heads, the golf course’s control system is only a few years old.

“It’s a system that provides good coverage, but the system is starting to show its weaknesses,” Strachan said. “We put our irrigation system to a pretty good test last year and it handled it pretty well in general. Last year’s drought showed the age of the system and some of the challenges that come with age.”

The story in 2017 has been the opposite. April, May and June were wet months, and no real drought had been experienced through August.

“We haven’t done a full water this year yet.”

At best, some spot watering has been done as necessary, but none of it has been significant.

Water management and dealing with moisture and disease remain a challenge, Strachan admitted, but added superior drainage helps keep such pressures to a minimum. Many of the course’s fairways, for example, drain into adjacent bushes, and sump pumps between holes pump water into the property’s ponds.

The ponds, or “silver lakes,” are named for the array of silver birch trees on the property. Water, in the form of the ponds and the river, comes into play on 12 holes and is protected through conservation efforts. The ponds were artificially constructed, and Strachan said the largest among them is indeed a lake and not a pond.

What sets Silver Lakes apart from most other golf courses in Canada is its aqua driving range. Having an inadequate of amount of land for a traditional driving range, a decision was made to double the use of its largest pond to serve both as an irrigation storage reservoir and a driving range. Golfers can warm up before a round by hitting balls that float on the water, always ensuring an easily retrievable supply. The range balls, which are a little lighter than traditional golf balls and don’t travel as far, drift toward shore with the breeze and can be easily collected for ongoing use. Strachan said the balls are hand picked, making their retrieval somewhat more labour intensive than on traditional ranges, but the water is clean and the balls are highly visible. He said the aqua range concept is the perfect solution for any course that has limited space for a traditional range yet has a sizeable body of water available.

Other than Silver Lakes, Strachan said the only other aqua driving ranges he knows about are located in the Carolinas and perhaps Florida.

The perimeters of Silver Lakes’ ponds have become naturalized areas, reducing the number of fertilizer inputs and the amount of labour involved when mowing was formerly done. Buffer zones have become more of a trend on golf courses and are usually established in areas deemed out of play. The club has a dedicated gardener on staff whom has planted these areas to wildflowers to serve as new pollinating grounds.

Like several golf courses situated in heavily wooded areas, Silver Lakes is prone to inadequate sunlight in some spots. An assortment of maple, cherry, birch and ash trees surround every hole. Although many of the holes are fairly open to desirable amounts of sunlight, excessive shade remains an issue in some areas. Strachan credited his predecessor Jim Nicholls for “doing a good job” opening up a number of troubled areas to receive proper amounts of sunlight.

Mother Nature lent a hand a few years ago in a roundabout way to clear some problem trees. About 300 trees were lost on the golf course in a microburst, including about 40 alone in one area. The reduced canopy flooded a former problem tee with sunlight, significantly improving its turf health.

Strachan said only trees that are dying are purposely being removed, and ash trees affected by the emerald ash borer are being dealt with accordingly.

“We have some greens that have shade issues. Shade is a problem here for sure.”

In spite of the challenges Silver Lakes’ trees provide, they greatly add to the character of the golf course, Strachan said.

“Very few holes you can see from another hole.”

He said the mature tree-lined fairways set Silver Lakes apart from other courses in the area and promote a sense of isolation and tranquility among golfers.

During the winter months, the golf course might not be as isolated as club officials would like. Strachan said a problem with snowmobilers trespassing onto the property has become apparent over the years, and some significant damage to the course has been the result.

“We have a big problem with snowmobile damage in this area.”

During the polar vortex winter of a few years ago, a combination of snowmobile and ice damage was realized on the second, third and seventh greens, prompting the erection of fencing on some of the alleyways snowmobilers chose to use.

“It helped, but didn’t eliminate it,” Strachan said, adding every green has since been roped off during the winter.

Most greens on the course possess high populations of bentgrass, but a few are a mix of both bentgrass and annual bluegrass.

Silver Lakes typically opens for the season in mid-April, but usually doesn’t close until the middle of November. In 2016, the golf course remained open for play until Dec. 4.

“We stay open pretty late for this area.”

Strachan mows his greens at about .120 inches and incorporates frequent rolling into his regime.

“We roll quite a bit and cut and roll some days. I don’t hear any complaints about the green speeds. They’re all pretty happy with the consistency. Having consistent greens is just as important or more important.”

Greg Strachan has been superintendent at Silver Lakes Golf & Conference Centre since 2008.

On some days, greens are rolled only to give the putting surfaces a break from cutting. On Fridays, however, greens are cut and rolled for the golfers in Silver Lakes’ men’s league.

Strachan said his greens don’t face many disease pressures in spite of their shade and moisture issues. Dollar spot is more of a problem on his fairways, leaving anthracnose as the biggest challenge he faces on his greens.

Staying on top of the amount of moisture left behind on his greens due to heavy shade is “a fairly significant issue to keep on top of.”

One of his strategies is to topdress his greens monthly and spike them every two to four weeks.

In recent years, the buckets have been removed from the fairway mowers to allow nutrients from the clippings to be returned to the soil.

“In my opinion, it (removing the buckets) has helped reduce the thatch in our fairways (combined with verticutting).”

Fairway mowing on Mondays, Wednesdays and Fridays used to take about six hours to accomplish with the collection buckets intact. With the buckets removed, two fairway units can get the job done in 4½ to five hours.

Once the fairways have been mowed, the clippings are blown to scatter them about.

“It just gets rid of the clumps and disperses them.”

Silver Lakes, which was designed by R.F. Moote and Associates, is home to 45 bunkers that are raked four days a week by “Bunker Billy,” a retired man in his 80s who possesses a deep passion for keeping the hazards in tiptop shape. The bunkers are fairly small in size, allowing their upkeep to be adequately handled.

Bunker Billy is one of a number of older maintenance staff members who work seasonally. Strachan said his older employees aren’t in it for the money as much as for the chance “to get out of the house.”

The cast of “over 75s” includes Fairway Willy, a fairway-mowing specialist; Pistol Pete, who cuts rough around greens and tees and helps cut fairways; and Chef Donato, who mows roughs. Along with Bunker Billy, each has been with the club for at least 15 years.

In all, his staff numbers 15 at peak season, including an assistant and mechanic.

“Quality, not quantity, is better than having a bunch who don’t care. You (otherwise) spend more time babysitting than doing anything else.”

Silver Lakes is Strachan’s first post as a superintendent. He was previously assistant superintendent at Copper Creek Golf Club in Kleinburg from 2001 to 2008 and had worked at the National Golf Club of Canada in Woodbridge from 1996 to 2001.

He began at Silver Lakes in July of 2008, taking over for Nicholls who moved on to another position in the Niagara region.

“I kind of got thrown into the fire in mid-season.”

One of his career highlights was being involved in the grow-in process at Copper Creek.

Strachan said the golf industry can be challenging, but added, “I think we’ve got a good product” at Silver Lakes. “We’re pretty aggressive (with marketing, etc.). You have to always be thinking of different ideas to make your money. The golf courses that are strictly golf have a tough time surviving anymore. You need weddings and banquets and things like that.”