Maintaining condominium properties isn’t for every landscape contractor. Some can’t be bothered dealing with condominium corporations’ boards of directors or property managers as well as the associated directives and regulations which are usually carved in stone.

The condominium market, however, is thriving, and it’s an opportunity for contractors who wish to grow their business to consider it as an option, said Nathan Helder, president of Gelderman Landscape Services in Waterdown, Ont. 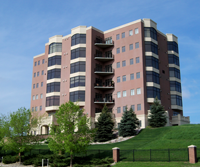 One of three panelists to address the topic at January’s Landscape Ontario Congress conference in Toronto, Helder said a landscape contractor’s decision to get involved in condominium property maintenance is either black or white.

“You’re either committed or not committed.”

His company has been involved in condominium maintenance since the mid-1970s. The benefit, he said, is that several different services can be provided for one client, including turf maintenance, landscape construction, snow removal and design services.

“The beauty of this is you have one client and you’re selling them multiple services.”

The “one” client is a condominium corporation which could include as few as five or six units to as many as thousands. Condominiums feature various styles of construction, from townhouse settings in more spacious areas to highrises in tighter urban neighbourhoods. Residents own their particular unit while the grounds, walkways, parking lots and other exterior areas are considered common elements for which residents must share the expense of their upkeep.

Condominiums are self-governing communities operated by boards of directors voted upon by the owners of the complex. It may be a self-managed condominium operated directly through a board of directors or a professional company might be hired to manage the day-to-day operations of the corporation. This includes the maintenance of the property, financial aspects, maintaining the official record for the corporation as well as its reserve fund, and all other related matters.

It’s not only retirees who choose to live in a condominium setting, but also younger couples, young families and single parents. Many choose this communal style of living because they don’t wish to be saddled with such responsibilities as mowing their lawns or shoveling their walks. They are also attracted by the increased sucurity that condominiums tend to provide.

For townhouse-type condominiums, unit owners will have their own backyards. These are considered an exclusive-use common area, but residents must still abide by a set of rules that prohibit them from using their yards for purposes deemed as detrimental to the complex itself. For example, they may not be permitted to plant or build certain things.
A board of directors will govern a number of sub-committees including one which will make key planting and gardening decisions. The board itself is governed by the Condominium Act as well as the corporation’s own bylaws. The board sets budgets and works with lawyers, engineers, auditors and contractors.

When engaging the work of a landscape contractor, the board or property manager will seek at least three quotes, but often as many as six. A decision will then be made as to which contractor to hire.

“Cheapest is not always the best,” said Maria Desforges, president of J&W Condominium Management of Hamilton, adding the board can always question the contractors to learn why their quotes might be higher or lower than others’. Reputation of the contractor and the quality of his work will be taken into account when making a decision as to which company to hire.

The process for hiring a contractor will vary, depending on the scope of the work required. If a large project is to be undertaken, the condominium board will engage the services of its engineer to develop a plan before tenders go out. For smaller projects, the board will often do the groundwork itself.

The board will entertain quotes, conduct interviews with the bidding contractors and have them visit the site to see exactly what needs to be done as well as the scope of the work.

Often, a contractor will come highly recommended, but the board must still go through the proper hiring process as outlined in the corporation’s bylaws. If it’s a contractor the board has worked with in the past and he’s done good work and can be trusted, he’ll be given an opporunity to bid on the job.

When deciding upon a contractor to hire, the board strives to compare apples to apples, and suggests the contactor meet with the board to discuss the work involved and to ask and answer all questions, particularly if it’s a new contractor trying to get the corporation’s business.

“How do we market to a very niche type of client?” Helder said, adding it’s all based on relationships. “You have to be connected to the right people.”

In the field of condominium property maintenance, regular forms of advertising are ineffective, he said.
Helder said he laid the foundation for his relationship-building by joining two organizations: the Association of Condominium Managers of Ontario (ACMO) and the Canadian Condominium Institute (CCI) which has 18 chapters across the country.

ACMO, which is primarily based in the Greater Toronto Area, helps educate property managers. Membership in the association, which  reached more than 2,000 about eight years ago, is made up mainly of managers and management companies. Only five landscape contractors were members of the organization when Helder joined. After joining, he became involved on one of ACMO’s committees.

“After five or six years, it’s amazing who you get to know.”

Condominium corporations join the CCI which conducts education seminars for their boards of directors.

As a contractor, Helder said he wishes to associate himself with organizations that his customers are a part of, adding he’s since learned the “condo lingo” and finds it to be much to his advantage to be able to speak the same language.

“It’s not the membership that will give you the business,” he said. “It’s what you do with your membership.”

One way in which a landscape contractor can get his name circulated is to voluntarily write articles for pertinent publications.

Helder said not to expect to acquire business simply by joining an association.

“The more you give, the more you get,” he said, adding that tends to compound in the condominium business.
It is important for the contracting company to be courteous, polite and businesslike when interacting with a condominium community so as to maintain a good rapport with the client, he said. The company should have a contact with the corporation, who would normally be a designated landscape director or board member.

“Our landscape director sends information to our landscaping company as to what we would like to have done in addition to their regular schedule of work,” said Carole Booth, president of the board of directors for a 69-unit townhouse complex in Burlington.

If individual residents approach a contractor’s crew member while he’s on the job with a complaint or suggestion, the worker is to tell the resident to refer the matter to the property manager or board designate for further direction. This prevents the employee from having to deal directly with an issue thereby taking away valuable time meant to be on the job. The employee can always answer a question posed by a resident as long as it’s not going to interfere with his work.
Booth said the best contractors will provide a complete and detailed list of what needs to be done and will keep a tight schedule. If a schedule can’t be kept, it is best that the contractor relay that to the designated board member.

Corporations want contractors who can get everything done in a timely fashion and who tidy up after themselves, she said.

If a contractor can’t finish a particular job at the moment yet can complete it at another date soon afterwards, he must let the property manager or board designate know, Booth said. Additionally, if he detects something on the site requiring attention, either immediately or in the future, that information also must be relayed.

Punctuality is important, and notification of late arrival for a meeting must be made, she said. This, she acknowledged, goes both ways.

An open line of communication between the board and the contractor must always be in place so there can never be the chance for surprise, Booth said.

“Communication is essential in that we’re working together with our contractors,” she said, adding that the board is to be notified if any work requires a sub-contractor. Sub-contractors must be aware of the details of the contract, she said.
Helder said there is plenty of opportunity for a landscape contractor who wishes to enter the condominium maintenance sector.

“If you do good work, you can have a huge referral tree really quick,” he said.

It could be that one property manager has 10 managers who each look after eight properties. If each property has 80 units and each one has its own backyard, there is the potential for the landscape contractor to be hired to do some exclusive work. Managers frequently talk with other managers, and good work can lead to plenty of referrals. The opposite will happen, however, if work is substandard, Helder said.

It’s extremely helpful, he said, if the landscaping company has a solid organizational structure, but it can be difficult to reach that ideal structural stage.

“If you’re an owner/operator and you’re dealing with 10 condo corporations with all these people and you don’t have a supervisor or an account manager who can actually manage that relationship, it’s going to be very stressful for you.”

The contractor must first grow his business fast enough to get an account manager to take care of the relationship. The owner has enough to do already that having to do everything on his own can be a big setback.

Helder sends email communications to all of the property management companies that hire his business. One such communiqué was sent just as Landscape Congress began. With outdoor temperatures at the time plummeting to almost minus 40 degrees Celsius, with the wind chill, he let the management companies know that he wouldn’t be sending any crews out that day to clear snow from walkways, due to the risk of frostbite or possible death. He noted in his communiqué that if anyone had a problem with that directive to call him.

“Nobody called, but if I hadn’t said anything and there was nobody there to remove that snow, I would have got phone calls.”

In the condominium market, nothing is taken for granted, he said, and everything must be communicated.

“No news, in the condo world, is bad. If you don’t ever hear anything from them, they’re looking elsewhere for another contractor.”

Helder said he felt the need to communicate to a board about one of his employees who stands nearly seven feet tall and appears to be “flying by” when spreading fertilizer. Because he’s so tall, his strides are much greater than those of Helder’s other employees, and it might be perceived by onlooking residents that the worker is rushing his work. But the spreader he uses is calibrated to match his faster pace.

“It’s important to communicate that fact.”