Features Landscaping
The road toward succession planning among landscape contractors

Have a well thought-out plan drawn in advance 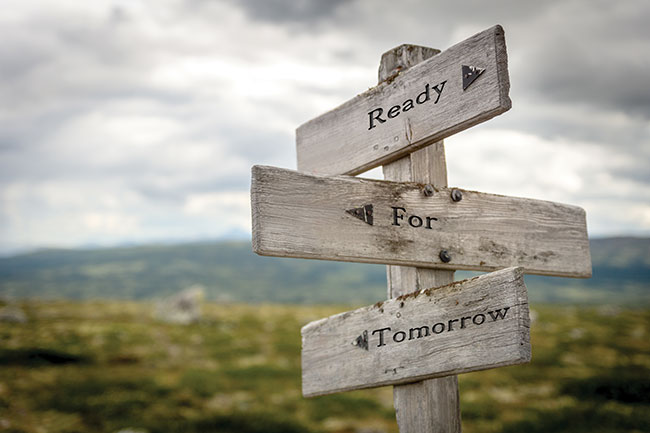 The time will eventually come when a landscape contractor is ready for retirement. If it’s a family business, he or she may wish to pass the company on to a son, daughter or another relative, or perhaps to a long-serving employee or group of employees. However the change in ownership plays out, the retiring contractor must have a succession plan drawn up well in advance and be 100 per cent committed to stepping aside.

Nathan Helder, a third-generation owner of Waterdown, Ont.-based Gelderman Landscape Services, acquired the business 15 years ago from his father-in-law Hank Gelderman. Understanding what is involved in succession planning from the perspective of both the seller and buyer, Helder shared details of his experience in January during the virtually delivered Landscape Ontario Congress.

Business statistics show a high failure rate among successions, yet this can be avoided with long-term planning that considers the seller, the buyer and the company itself. Helder said his acquisition of Gelderman from his father-in-law was a success, due in large part to a well-conceived plan that was set in motion in plenty of time beforehand.

“It wasn’t only about the seller trying to maximize the return,” he said. “And it wasn’t about the buyer trying to buy the cheapest business possible.”

At the end of the day, all three parties – the seller, buyer and company – must come away as winners, but things can get complicated sometimes, Helder said.

“You may have to sacrifice a little bit on the one end for the other one to succeed.”

The seller must have a date in mind for when he wishes to sell a company, and he must be 100 per cent committed to it without having second thoughts as the date draws nearer, he emphasized.

“Are you really committed or just tired?” he asked rhetorically. “I would suggest picking a date and drawing a line in the sand.”

Helder said he has experienced several instances in which a contractor announced his intentions to sell his business to a family member or employee but avoided setting a date and was essentially “hanging a carrot loosely” in front of the would-be buyer. Non-commitment is a bad business practice, he said.

Reflecting on his acquisition of Gelderman, Helder said he initially asked his father-in-law if he could invest in the business, not having been associated with the company at that time. Gelderman had yet to commit toward selling the company but foresaw Helder as its heir apparent and said he was prepared to sell.

“That’s very unique when someone is ready to sell now.”

Getting the right tax advice is crucial before selling, and the company’s accountant should provide that counsel.

Helder warned the process is also apt to take longer than anticipated, adding Gelderman’s plan took a year of building before it was rolled out.

Company can’t be reliant on seller
If the seller wishes to sell his company within a certain period, several things need to be accomplished beforehand. If the seller is looking for a way out, it’s dependent upon what he’s doing today.

“Ensure the company is not reliant on you (the seller),” Helder said, adding that if the seller himself is the key person responsible for all aspects of the business, it won’t be of much value if all its operations are his responsibility.

“If it’s reliant on you and you’re gone, your business is sunk.”

In the case of Gelderman Landscape Services, a plaque on the wall noted the number of days that had elapsed since Gelderman’s last holiday. Seldom did the number surpass 15 days.

“He was gone every month for a week,” Helder said, suggesting it spoke volumes about how well the business functioned in his absence.

The seller must have created a business that is saleable and desired by a prospective buyer who wants to run with it, he said. The business must be both profitable and growing.

“You have to be growing your business because who’s going to fund the transaction later and who’s going to want to buy a business that’s heading downwards and isn’t profitable? You as a seller must be all in until the last day. You’re not half out and then want to sell.”

Upon acquiring Gelderman, Helder didn’t need to reinvest hundreds of thousands of dollars to repair or replace equipment because the business had consistently kept on top of everything. A buyer will be aware of things not being done and will be on the hook for having to spend ample capital to fund the deal.

“You (the seller) have to reinvest all the time and make sure the business is continuing to the next generation.”

A company’s financials must be “clean” prior to its sale. Helder said, noting several owners tend to run personal things for their business. If the company president or owner isn’t earning a corresponding salary and the business isn’t accustomed to paying such a stipend, the prospective buyer expecting a proper salary will find the business can’t cash flow it, “and then we have a problem.”

The seller should avoid having any “skeletons” among his financials, including shareholder’s loans. By devising a succession plan well in advance, it allows ample time to ensure financials are clean. The company becomes more saleable, making for an easier transition.

Practise ‘what’s next’
As the seller contemplates what his post-business life might be like from his time actively working, he may wish to “practise what’s next,” Helder said. By delegating responsibilities and empowering others to assume more management duties, he can begin practising what he envisions for his future. A good succession is largely dependent on the seller’s “what’s next” plan, he added.

Coming up with the right selling price is critical, Helder said. If it’s too high, the buyer is unlikely able to cash flow the sale. When Gelderman pitched his price, Helder asked his accountant if it was possible for it to be cash flowed over the next 15 years. He was told it would be tight, but if he worked hard over the next seven years things would get easier.

If a company is priced too high and doesn’t cash flow, additional funds must be injected, leading to a poor business proposition. If the price is too low and the business is gifted to family, that’s a bad choice, Helder said.

“Nothing was gifted to me. I overpaid but was given a huge opportunity of a lifetime.”

Gifting a business to a family member or pricing it too low can cause resentment among other members of the family, he cautioned, adding banks aren’t enamoured with the practice. Helder’s acquisition of Gelderman was done through a vendor takeback arrangement.

Owners who are unsure about selling their business and aren’t confident the business will succeed may be reluctant to go the vendor takeback route, perhaps opting to hold off to get the money up front, he said.

Over the 15 years since acquiring Gelderman, Helder said there were two years during which he was granted a grace period by his father-in-law when making payments became challenging. The price and terms of sale are important, he said, stressing sellers want buyers to be successful so that they get their money. It’s a different matter when a business is sold to a competitor or private equity, “but if you sell to your employees or family members, the deal or terms is critical.”

The key to a successful transaction hinge on the seller’s commitment to step down with 100 per cent conviction.

“When you say you’re ready to step down and you can’t give up control, that causes dysfunction in the company among company members, but there’s also dysfunction between you and the buyer.”

Helder had no previous connection to the landscaping industry prior to acquiring Gelderman but had “lots of gumption and willpower” to succeed. Gelderman walked away from his former company and began a three-week vacation almost immediately afterward.

Get your own lawyer, accountant
The seller and buyer should each have his own lawyer and accountant onside during the business transaction, Helder suggested. Those representing the seller will try to save him the most tax possible while the buyer’s team will have their client’s best interests in mind.

There are typically four types of buyers: family, employees, a competitor or private equity, although sales involving the latter are rare in Canada.

If more than one family member becomes the buyer, “lanes” must be defined, especially in the case of siblings taking over, Helder said, adding it must be clear who will be responsible for what. Someone must assume the role of president and take charge.

The new buyer must command respect and not demand it, he warned.

“I couldn’t say, ‘I’m the new guy and you have to listen to me.’ It has to show in your actions. If you show grit and tenacity and be the leader, you will command respect.”

Helder said he is already planning his own exit strategy.