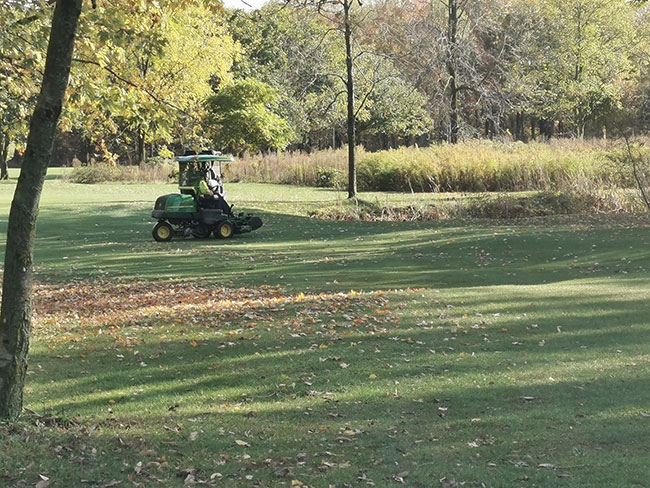 A season of ample heat and humidity presented a challenge for mowing greens without some scalping.

What a year! I hope everyone is safe and enjoyed this record-setting year in golf!

I have had numerous calls about mowers scalping greens, and many factors have impacted this issue. Hence, the perfect storm!

As we were told in March to shut down operations and pursue only “essential maintenance” (isn’t everything we do essential?), most golf club owners laid off staff and let the superintendent keep the place in order. As late April and May came, the grass was in fine growing form, and the super needed help. So, the chef, pro and secretary were bestowed on the course to help “cut grass.” However, what about spring aeration? Topdressing? Verticutting? There were no people to do that.

So, our friend Mr. Thatch decided to ramp up operations and create puffy turf.

“Golf courses can open,” Ontario Premier Doug Ford said, leaving five days for superintendents to prepare for May 23rd openings. Staff had to be brought back and trained in disinfecting equipment and staggered start times, if they weren’t making more on CERB.

Then here comes the heat and his little friend humidity (what a year for a pool). July had the third highest temperature on record. Too much heat, so we can’t verticut, topdress or aerate – this along with 200-plus golfers a day at most courses. (What owner wants to hold tee times to do cultural practices anymore?).

High humidity makes the turf very tacky, thus allowing the bedknives to slide smoothly across the turf and, with thatchy conditions, it allows the knife to tip up and dive into the greens which therefore scalps the turf. Mechanics were pulling their hair out trying to figure out how the mower could cut 95 per cent of a green perfectly and annihilate five per cent. Then, due to the heat, we watered and watered and watered, making the turf soft and spongy, especially on the perimeter of the green where traffic and compaction is not as prevalent.

I spoke with a few colleagues regarding the issue and how to get through it. Here are some of their comments.

Jim Moore at Puslinch Lake said, “as soon as the humidity hit, on went the front solid rollers.” They are not as aggressive as a Wiehle roller, especially around the green perimeter, as they slide and don’t furrow the turf.

Duane Schmitz of Woodstock Meadows stated, “I raised my heights .025 right away.”

In the words of legend Bill Hynd, “Some grass is better than no grass!”

In conclusion, we all know the important cultural practices in our industry are to provide optimum playing conditions. Just this year between the shutdown, quick opening, full-to-capacity golfers, heat and humidity, we were caught in the perfect storm!

As September approached, temperatures cooled down, and verticutters, topdressers, and aerators were lined up like the Indy 500 in every shop, I’m sure.

Side note: Is anyone else having issues with some disinfectants corroding hour meter sensors, key switches and cart windshields? I digress.

Mike Slack is the owner of Slack Reel Services in Burlington, Ont., which has been serving the golf and turf industry since 1989. The business is family-run and deals with various companies across Ontario and other parts of Canada, specializing in reel mower sharpening, parts distribution and on-road service technical work, mainly in Ontario. The business may be reached by calling (905) 516-4757 or by emailing slackreelservice@gmail.com.