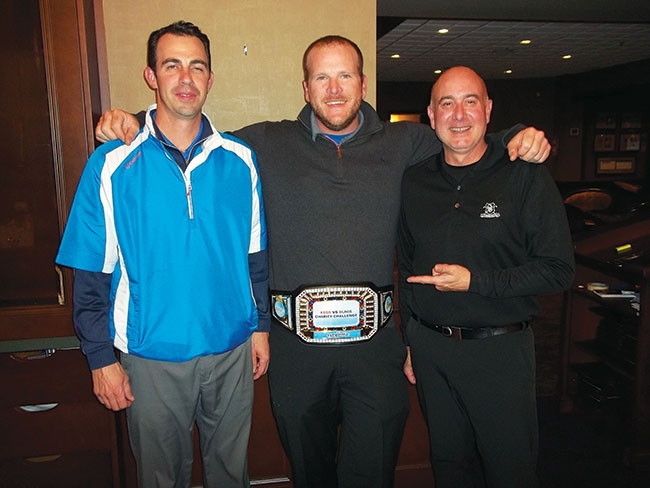 The event was a friendly competition between select members of the Greater London Association of Golf Superintendents (GLAGS) and the Kent-Essex Greenskeepers Society (KEGS).

Essex superintendent Chris Andrejicka said although the greens project was a success, there is still some work to be done to ensure all green sites are consistent. Most notably, about 60 more trees are earmarked for removal to maximize sunlight penetration onto the putting surfaces.

Seventeen of 18 greens suffered major turf loss following the winter of 2013-14. A decision was ultimately made to replace the poa annua greens with bentgrass. The club chose a rarely used process to sterilize the soil and start anew by fumigating with Basamid and covering the greens with tarps to allow the fumigant to work.

All work was done in-house, and Andrejicka said he has been pleased with the results. He attributed at least 80 per cent of the project’s success to his assistant, Greg Brown.

Getting permission to remove trees proved to be challenging, Andrejicka noted.

“Trees are the biggest issue here, and members love trees.”

Members of both the GLAGS and KEGS teams congratulated Andrejicka on the quality of his new greens. In the end, the GLAGS team had the most success on the putting surfaces, walking away with a lopsided 14½ to 6½ victory. It marked the first time in the Cup’s eight-year history that the visiting team won.

The event paired twosomes from each association against one another in seven separate matches. The playing partners competed for one point in a best ball format over the first six holes, another point through the middle six holes in a scramble, and a final point for the remaining six holes in an alternating shots contest. KEGS managed only one win in seven matches—a 3-0 decision by Greg Brown of Essex and Gregg Menard of Wildwood Golf & RV Resort over Dan Lavis of Tarandowah Golfers Club and Patrick Brennan of the Fox Club. GLAGS tallied four separate 3-0 routs of its own to earn the decisive victory.

As sponsor of the event, Syngenta put up $1,000 to the winning team. Like last year, GLAGS will use the money to send randomly drawn members of the association to participate in the 2017 Ontario Turfgrass Research Foundation fundraising golf tournament. It will be played in August at the Devil’s Pulpit in Caledon.

Syngenta turf specialist Ryan Beauchamp said putting the prize money back into the industry was a good way to go. The first several years of the Syngenta Cup saw the money going to the charity of the winning team’s choice. Benefactors have included children’s charities and an orphanage in Haiti.

“This is all about giving back,” Beauchamp said. “Life is pretty good when we play at a special place like this.”

Beauchamp talked about some of the new Syngenta products that will soon be on the market, and the superintendents in attendance discussed a number of topical issues, such as using boron to control ant populations.

The first-class treatment of the 28 participating golfers went beyond the course itself. A topnotch meal was enjoyed following the matches. Andrejicka introduced participants to veteran chef John Kukacka who spoke passionately about the techniques he used to prepare the meal.