Managing pests on home lawns is a different tactic than it was prior to
the implementation of Ontario’s cosmetic pesticide ban in 2009.

Attention has since turned more toward preventative than curative measures, Dr. Michael Brownbridge of the Vineland Research and Innovation Centre said in February at the Ontario Turfgrass Symposium. 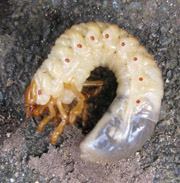 “Pest, disease and weed issues are far, far less if you’ve got a healthy lawn to start with,” he said.

Lawns must be looked upon as systems, he noted, adding that if pests come along, they need to be dealt with accordingly.
Insects such as grubs—whether they are the larvae of the European chafer, Japanese beetle or June bug—and chinch bugs require attention if they get into urban lawn settings. Sod webworm and leatherjackets can also be damaging, but Brownbridge said grubs and chinch bugs are the insect pests demanding the most attention.

In order to effectively control pests such as white grubs, it’s important to understand their biology.

“If you’re using any of these new control approaches, you can’t just spray at any time of the year and be effective. They’re best used at certain times of the year.”

The European chafer will lay its eggs in the soil in June and July. Once eggs hatch, the larvae will reside in the soil and feed on organic matter, including plant roots and thatch. Because their movement in the soil is both vertical and lateral, depending on soil moisture and food availability, lawn care professionals must know when the pests are most accessible for control.

When using biological control methods, the mode of action is modified by temperature. By the fall, grubs will make their way deeper into the soil to overwinter and can’t be contacted as easily.

Adult chinch bugs overwinter in hedge rows and come out in the spring to lay their eggs in the adjacent turf. Adults emerge in July at a time when grass is drought-stressed and spots begin to appear on the lawn. This is the best time of year for chinch bug control, Brownbridge said.

Efforts are ongoing to develop best practices when using some of the new biopesticides in lawn pest management, he added.

“How can we use these naturally-occurring organisms to our own advantage?”

Key challenges include how to get the organisms to the pests, how they should be applied, what formulations are available, and best timing.

Brownbridge said chinch bug control is accomplished during the hottest time of the year. In 2011, temperatures reached 35 degrees Celsius and higher when he was conducting chinch bug trials. In dealing with chafer grubs, one is working with something already in the soil which rarely gets to 15 to 20 degrees. It’s a cooler environment, and the right organism must be selected for each environment.

He said he believes there is potential with nematodes, although there is a need to understand the lifecycle of the nematode to learn why it is so important to apply them in certain ways. Nematodes are basically soil-dwelling organisms which, once applied, seek out the host species. They must be applied in high enough numbers and close enough to the target insect to be effective. Additionally, temperatures must be conducive.

The nematode enters the host through the mouth or other natural openings, carrying a bacteria which kills the grub. The bacteria multiplies and the nematodes themselves survive by feeding on the bacteria. If the circumstances are right, the nematodes will emerge from the body and go off in search of other hosts.

Brownbridge said the optimal time for using nematodes for the biocontrol of chafer grubs in Ontario is late August or September. He said the nematodes must be refrigerated. If it’s too hot, they will die. They should be applied to a moist lawn. They prefer moisture to move down into the soil.

The best control of grubs during trials occurred when a combination of nematodes and Met 52 bioinsecticide was used, he said. Between 30 and 60 per cent mortality was realized when the combination was used.

Various trials were conducted in a cool greenhouse setting in which trays of grass were grown and overlaid onto clean soil already infested with chafer grubs collected in the field. The turf was placed over the top, left for a couple of days, and then different sprayed treatments were used.

Some treatments worked while others didn’t, Brownbridge said, adding he feels there are some good biological options available, yet more work is still to be done.

“There’s more work needed on them yet to refine them to the point where I can be happy to say, ‘Yes, this works. This is how we do it.’”

Brownbridge said the lawn care industry must also consider the possibility of municipal watering bans and fertilizer restrictions, and to be able to position itself to be responsive.

New grass varieties are coming onto the market which are better suited to the sustainable lawn, he said. They possess different growth habits from traditional fescues and ryegrasses, and are similar to Kentucky bluegrass which is more attractive in lawn use. The newer varieties also have superior root systems, making them able to better use water and nutrients, and they are more drought-tolerant.

“Lawns are good things to have around. You can’t play soccer on concrete.”