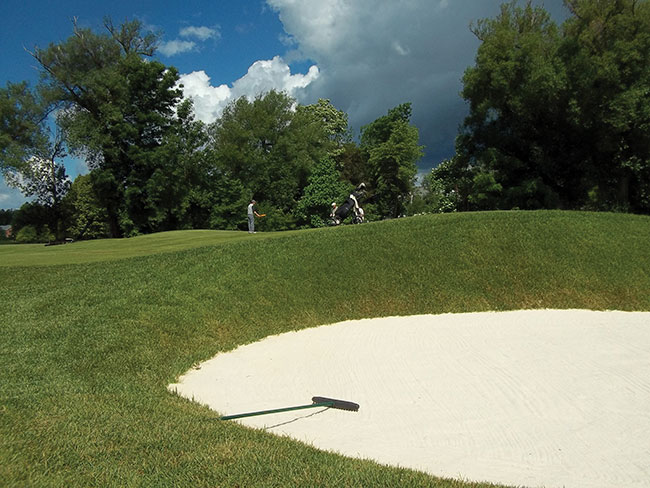 Architect Christine Fraser, who worked the past five years with renowned British architect Martin Hawtree, told the gathering in Niagara Falls that technical and practical elements of design are considered foundational and are important to the sustainability of a golf course.

Everything a golfer does counteracts the roles of the architect and superintendent, the Kingston, Ont. native said.

“There’s naturally going to be a breakdown in the playing conditions,” she said. “When elements of the course are no longer playable, that’s when we need to step in and put our architect mindsets to work and see what the bigger problem is.”

Tees, for example, can be influenced by a superintendent to simplify his job, provide a greater challenge for golfers and give those areas a better chance to recover.

Fraser said the size of a tee should be relative to par for that hole. Most tee shots on par three holes will be made with an iron, resulting in multiple divots. Tee blocks will consequently need to be adjusted regularly to allow for the regeneration of turf. Because a driver is used on most par five tees, the sweeping motion of the tee shot will result in fewer – if any – divots, necessitating a comparatively smaller surface.

The shape of the tee is also important, she added, noting circular or rounded tees have less useful space than the same-sized tees that are cut in rectangular shapes. Acknowledging rectangular tees may be more difficult to cut, requiring additional turns, “in terms of useful surface area, rectangular tees are going to give you a little bit more.”

Other characteristics of tees that need consideration include sloped surrounds and accessibility by both golfers and mowers.

“Take a look at your tees and see if there are any areas that need addressing and apply these thoughts. You have the machines and tools to fix it yourself.”

Greens will need even more attention, she said. There must be sufficient area for pin changes and the spreading of wear. Greens of a certain age will experience “green creep,” or a gradual reduction in surface area due to mowing patterns that come up short of the original perimeter.

“With half an inch or an inch every year, your greens are going to get smaller. Look at your sprinkler heads. Were they a foot away and now they’re two feet away from the green…or three feet away? This is something you can easily fix. Extend your mowing edge and make the green bigger and allow for a more puttable surface.”

The tendency is for mower operators to err on the inside of the cut edge of greens to avoid scalping the fringe. Consequently the size of the green gets smaller over time.

Access points to greens
Fraser urged superintendents to look for the access points to their greens, noting that putting surfaces with only one access point will experience plenty of compaction and additional wear from machinery and golfers who are limited to a single entry point. In cases of “punch bowl” greens, the access point is normally through the approach.

Other features such as green surrounds and bunkers or other hazards may pinch traffic into one area, creating potential problems.

“Traffic circulation is an important aspect of good design. It takes into account how to direct traffic and disperse wear. Ideally, you will be able to throw away all of your cart signs and your ropes because the ground contouring and the hazard placement will do the job for you.”

Fraser said the superintendent must determine why an access point is unmaintainable.

“Where are you telling your machines and staff to be walking? Look at your ground contouring and see how that is contributing to wear. The key is to manage traffic through good design instead of signs and ropes.”

Poor cart path design can contribute to areas of wear due to high traffic levels. Paths that don’t have a logical endpoint or no means to encourage the dispersion of cart and foot traffic are apt to create problems on the golf course.

One of the most overlooked elements of golf course design is surface drainage, Fraser said.

“We just need to know where the water’s going.”

Ineffective drainage has a significant impact on day-to-day maintenance, potentially subjecting a green to a variety of issues such as winter injury and traffic damage. She said to look for depressions and distinguish whether they were meant to be there as part of the design or are flaws that need to be addressed.

Bunker maintenance is among the most labour intensive practices on a golf course, but Fraser said there are others ways to make play challenging with fewer or no bunkers. A full bunker audit can help to reduce the amount of labour required to maintain them.

Advancements in technology have rendered some bunkers to be ineffectively positioned. Elite golfers are capable of hitting their tee shots past bunkers that were originally designed to swallow up well hit balls. The shift in technology is now penalizing the weaker players.

“In terms of good design, that’s not really what we’re going for.”

It’s better to have one bunker positioned in an ideal location than to have three bunkers positioned ineffectively, she said. Identifying poorly positioned, ineffective bunkers can lead to an opportunity to remove 10 to 20 per cent of the hazards.

“Take a look at what bunkers can go first. Removing bunkers is something you are capable of doing.”

Bunkers deemed necessary on the golf course need to be looked at for other issues, including the frequency of washouts, the difficulty in maintaining a consistent depth and the proximity of fairway edges to bunker perimeters. Fraser said growing alternative grass types adjacent to bunker edges is a means of avoiding fairway edges from inching toward the hazards’ perimeters. Slopes of bunker faces often pose a challenge to bunker depth consistency.

“You can reduce the slope without altering any function of the bunker. The bunker is still going to do its job. It doesn’t have to be really, really steep.”

A bunker’s exit and entry points are critical considerations, especially if there is only one location that is experiencing significant wear and compaction. It’s all about the ground contouring and how it’s funneling traffic into the bunker, Fraser said.

“If you want to reduce the amount of surface area of sand that you have to maintain, you can make a bunker just as functional by manipulating the ground contouring around the bunker.”

Lips often form over time in front of a bunker’s entrance. Golfers who walk in and out and then tap their shoes afterward allow sand to fall at the entrance and create a lip. She said it’s usually just sand that creates the lip, and it can be remedied easily with a shovel.

“Clear that lip away and allow the ball to funnel into the bunker. You’ll have a much bigger impact.”

Fairway alterations
Superintendents who wish to reduce the size of their fairways to save on maintenance and inputs should start by analyzing their fairway grassing patterns, Fraser said. The average 18-hole golf course has about 28 acres of fairway. To reduce the amount of maintained fairway, certain questions must be asked:

Some golf courses have intermediate rough along their fairways, but that’s a product of championship golf, Fraser said. Intermediate rough is designed to help balls that land perhaps only a yard from the fairway to be played with little penalty. Courses that adopt intermediate rough generally have exceptionally high primary rough.

“I imagine only a select few of your courses maintain your primary rough high enough to justify having this intermediate cut.”

“Is your intermediate rough necessary or is it perhaps a choice of the members, because it’s probably not there from an architectural standpoint.”

Incorporating non-irrigated ornamental grasses in out-of-play areas is a viable alternative to maintaining some rough areas.

“As long as the pace of play doesn’t decrease and you can still find your ball more often than not, I would say that more habitat rough the better. Environmentalists will thank you, you don’t have to water it, and it needs cutting only a couple times a year.”