Features Agronomy
Staying ahead of goalmouth wear and tear 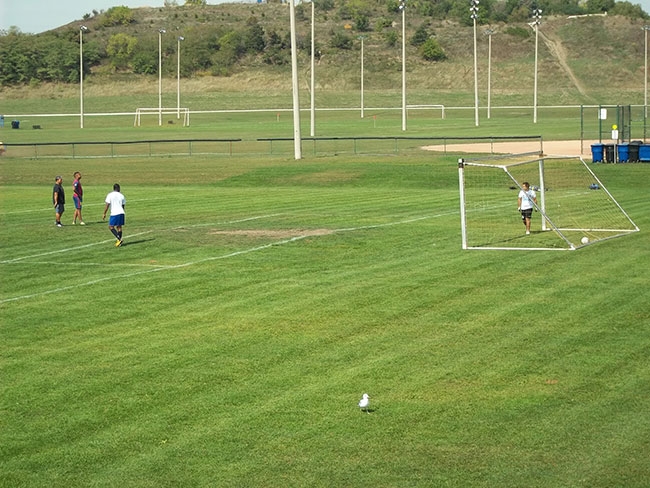 Keeping up with worn goalmouth areas is typically the biggest challenge faced by sports turf managers on soccer fields. It’s the area of the playing surface that sees the greatest amount of wear, and keeping up with that section of the field is often a never-ending task.

Sports turf managers from two different Ontario municipalities shared their strategies with several of their peers in Guelph in December at the second annual Nutrite sports turf seminar.

Dave Cambridge, sports turf and golf courses manager for the City of London, and Gavin Kellogg, sports field supervisor for the City of Burlington, spoke of their respective programs to address field wear and restorative policies.

Employed by the city for 30 years, Cambridge has supervised London’s turf fields for 10 straight years. For the past four years, he has additionally overseen the city’s municipal golf courses. He said he personally looks after only irrigated fields, including those at the city’s premier sports complex that is home to seven soccer fields, two baseball diamonds and a volleyball court.

To address the issue of goalmouth maintenance, Cambridge said portable nets are used on all lit fields, enabling better control of the goalmouth areas. The tactic results in varying field dimensions at different times of the year, but prevents wear from being concentrated in one area for a prolonged period of time. At the start of the spring season, the fields are rendered larger in size for about six weeks, during which time they get “beat up.” The nets will then be positioned into their rightful locations, bringing the field size to its normal dimensions.

During this time, the worn goalmouth areas prior to the relocation of the nets will be sodded or seeded and be allowed to recover since they are now out of play.

London was host city to the Ontario Summer Games in 2018, and sodding of worn areas had been done for the high-end event. Cambridge said the areas subjected to wear and tear were rototilled and pulverized to get through the hardpan. Aerating was done by AerWay equipment while Land Pride machinery and a recently acquired Turfco Tri-Wave overseeder provided overseeding needs. Vertidraining was contracted out.

The city applies five or six pounds of nitrogen on average for its fertility needs, depending on the length of the season.

“Our soccer fields and ball fields see way too much use as far as I’m concerned,” Cambridge said. “We don’t have any breaks. Some of our fields are 360 to 660 hours.”

He said maintenance staff tends to the worn areas by “chewing up” more than what was already torn up in the goalmouth region from normal play. Soil is added to level everything off, “then it will be chewed up, pulverized, rototilled, raked smooth, and then they’ll go out and topdress and overseed the whole field.”

Sometimes the hardpan can be so significant that aerators need to go down eight inches.

“There’s no sense seeding if you can’t get down through the hardpan.”

Cambridge, who oversees a lead hand, a full-time turf employee and 20 students, said he prefers to seed than sod over worn areas, but, if little time is an issue, sodding becomes the chosen option.

In 2018, field maintenance began later in April and continued until mid-November. The city will be challenged again in 2020 when it plays host once more to the Summer Games.

In addition to its natural fields, London has some artificial playing surfaces.

“I’ve never been a fan of artificial, but they serve a purpose.”

He said he hopes the city can acquire an additional artificial field that would allow a significant amount of play to transfer to the synthetic surfaces, thereby giving the natural fields a chance to properly recover. The city’s high schools are now using the artificial fields instead of their own natural fields.

The city’s natural fields are mowed three times a week at two inches. The irrigated fields, however, are cut a half-inch higher with regular park mowers. Fields are irrigated about seven times a year.

Cambridge said the city’s sports fields have soil textures that range from sandy to clay. Those that are straight clay help to reduce water consumption. By adding a mostly leaf litter compost obtained from a local source, situations of extreme wetness can be addressed.

The fields at the high-end sports complex receive five pounds of nitrogen each year. A dormant feed is applied in mid-November to achieve enhanced colour and turf density in the early spring. Cambridge said the amounts put down help remedy worn areas because of the increased density achieved.

Slicing and coring the fields to break up summer compaction and allow more air into the soil profile are part of the regular maintenance routine in London.

Before the city had a sports field supervisor, Kellogg said one individual cored fields in the spring and fall and sliced and vented in the summer.

“We used to contract out a lot of stuff – topdressing, deep tine aerifying and core aerification,” he said.

With the adoption of a new sports turf program enacted in 2018, the city began doing more work to its fields. A staff of three full-time and six seasonal employees work on the fields from April through November.

“The unfortunate part about seasonal staff is they’re always looking for full-time positions,” Kellogg said, adding he was busy in 2018 hiring new personnel to address a large turnover in staff.

More attention was directed to Burlington’s “A” class fields and baseball diamonds in 2018.

“We’re doing a lot of overseeding, aerifying and topdressing in the infields themselves on the clay diamonds.”

Soccer field goalmouths received greater attention with aerification, venting, topdressing and overseeding. Core aerification was done in the spring and fall while solid tine venting of the goalmouths was done throughout the playing season.

Many of Burlington’s baseball diamonds were given extra attention to address grass invasion of the backstop areas.

Fields within the city’s 15 satellite parks receive “good care” throughout the year, Kellogg said, while the rest of Burlington’s 118 fields that are located in decentralized parks are essentially just mowed.

One of the more significant changes to the city’s maintenance regime under Kellogg’s new position is that all field fertility is now done in house. Previously, the work was contracted out. Fertilizing is done three times on non-irrigated fields and four times on irrigated surfaces at rates of 3½ to 4½ pounds.

Aerifying the fields is done three times annually with three-quarter-inch tines. About 89 million cored holes are produced over about 575,000 square metres.

“The goalmouths received more attention with an additional four core aerations combined with a topdressing, and the overseeding and venting were done on the irrigated fields only, in June, July and August.”

Aerifying and verticutting were done to reduce thatch in sodded areas. Cores produced were shattered and blown off the fields.

Goalmouth areas deemed to be particularly bad underwent restoration work with staff taking great pride in ensuring everything was set and level, Kellogg said. He added attempts were made to keep the public off the fields while they were being restored. Much of the restoration work was done in the fall as a strategy to keep people off the turf. Doing the same work in the spring might have proved futile in keeping people off the fields.

When an area greater than four feet shows more than 50 per cent bare area, it will be earmarked for enhanced compaction reduction.

“We are at a point where we’re starting fresh. This is the first year we’ve really had a formalized program. We’re doing everything we can to get it to the point where we do not sod any more of those fields. The goal was to make sure we got the proper aerification, topdressing and overseeding and building up a good seed bank.”

Seed is broadcast in the goalmouth areas, Kellogg said.

A number of different challenges have arisen, he said, including irrigation. Good turf requires proper watering, yet the city doesn’t have full control over its irrigation. Staff at the decentralized parks must set the controllers. Two irrigation technicians check Burlington’s fields, but usually it’s the field staff reporting any issues to the technicians rather than the technicians tending to the issues directly.

The city used to adopt a practice in which straight peat moss and triple mix soils were put down, but Kellogg said he prefers to go with more of a straight sand or possibly 60 per cent sand, depending on the soil’s texture. If working with a clay field that could use some organic matter, he said he prefers to go with 60 per cent sand and some topsoil. If he is working with good soils and wants to get the infiltration rate down, allowing water to get through the profile and prevent compaction, sand does a great job in those situations, he said.

“This will give you great germination. You can put that down and seed loves it because it will germinate ‘like that.’ Once you put a soccer player on that with his feet moving back and forth and you have wetness in the spring or the fall, you’re going to tear up all your goalmouths.”

Overseeding of goalmouth areas is done with a quick germinating bluegrass and creeping ryegrass. Kellogg said the AerWay is ideal for simply opening up the surface at times when cores needn’t be pulled. The idea, he said, is to open it up and get moisture down. The machine’s rear rollers complete the task by smoothing out the tufts.

Kellogg prefers to tighten his spacings to 2½ by 2½ inches or 2½ by three inches to produce plentiful cores. He admitted it makes more of a “mess,” requiring the cores to be matted and broken up. In the fall, when teams are in playoffs, solid tines will be used to open the profile to allow better root development. Once playoffs have concluded, coring will take place.

A project to reduce bentgrass populations on soccer fields was initiated in the fall at Burlington’s Maple Park and will continue over the next two to three years.

“With water comes bentgrass. Bentgrass isn’t a great surface to play on for soccer. It’s great for golf, but not for soccer. The roots are at the top.”

Using a verticutter, as much of the bentgrass as possible was removed. It was swept up and the area was overseeded.

The bentgrass reduction program will include cutting back on the amount of water applied and topdressing with straight sand to help move water down through the profile instead of it being left near the top.