Communications must be maintained all year 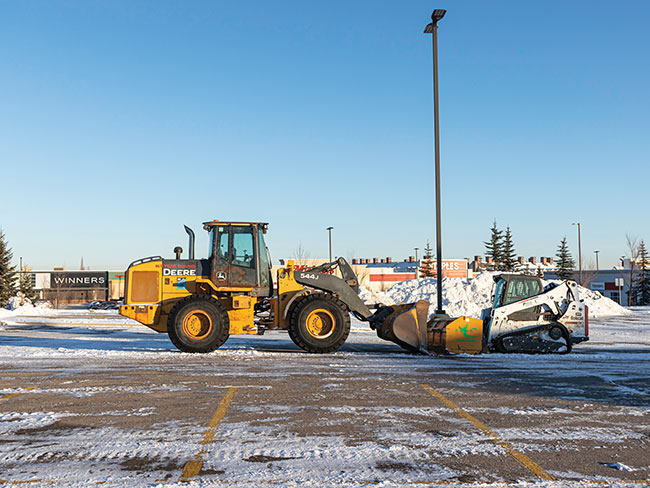 Snow contractors should know the lay of the land of a parking lot and where such obstacles as light poles are located. Photo: primestockphotography

Solid communications are vital between a snow contractor and the property management company for which he works. A communications plan must be drawn up to cover the periods before, during and after the snow season, and, ideally, fees must be collected, and contracts signed before the first flake hits the ground.

Ryan Dempsey, managing partner with the East End Group, a snow removal company serving the tri-state area of New York, New Jersey and Connecticut, and Jeff Levy, vice-president of property management for DLC Management, a New York-based owner-operator of shopping centres, outlined the responsibilities of both parties during a virtually presented webinar in the fall that was sponsored by the Snow and Ice Management Association (SIMA).

Snow removal is unlike other property services, Dempsey said, because it’s emergency based.

“It’s a reactional business,” he said. “There’s little you can do to be prepared for it.”

What the snow contractor and property management group, however, can prepare for are the necessary agreements that outline the responsibilities of both parties so that priority and secondary arrangements are met, and all follow-up practices are accomplished to everyone’s satisfaction.

Dempsey said it’s a good idea to learn about any past hurdles involving the property management group when forming a new relationship or taking on new properties. Having that information available at the outset is vital, he added.

Requests for proposal (RFPs) should be accurate and provide the necessary information about a property, Levy said.

“Everything has to be shown on that RFP to get the job that you need and an accurate bid for the work to be done,” he added.

Once a contract is signed, it should show that both parties are on the same page regarding the scope of work and the expectations for the property, including what are considered priority and secondary matters.

“And what are the follow-up practices when the event is done?” Dempsey said.

Levy added that once an agreement is in place, a walk-through of the property be conducted with the team of people who will be tasked with the snow removal service. They should know the layout of the property and where curbs and other obstacles are located so that everything can be marked.

“It’s important they know how the property flows,” he said.

A chain of command should be established, Dempsey said, emphasizing that it should be clear who’s giving direction from the property management company.

When the job is done, the right people from both the property management and snow removal companies must ensure invoices are paid, Dempsey said.

Levy noted an important consideration in pre-season communications is to ensure a future communications timetable is scheduled for both the in-season and post-season periods. All players must also be connected, he added, noting that if a property manager is unavailable during a snow event that someone else is ready to step in and provide timely information to shopping centre tenants.

Among the key considerations the snow contractor must understand are the operating hours of a property, Levy said. Fire lanes must always be maintained, the property must remain accessible, and certain areas of a parking lot must stay cleaned for employees who work during the night.

An RFP must indicate the entirety of a property’s ins and outs to ensure accuracy in a quote and that the expected service is delivered. Such attention to detail helps to reduce the number of calls from unhappy tenants.

If a storm is forecast, pre-storm communications should begin with the property management group 36 to 72 hours in advance. Dempsey said it provides ample heads-up time to alert the commercial property that a weather event is brewing. Updates will then be provided every 24 to 12 hours along with the snow contractor’s service plan which includes all pre-treating measures and deployment method.

From the property manager’s perspective, being provided with weather notifications allows for any necessary schedule changes to be made to ensure everyone is ready, Levy said.

“The weather information that is available today is more accurate than it was five years ago and is more pointed at a direct location, making it so much easier to manage,” he said.

Having such information available allows Levy’s team to directly work with Dempsey’s crews and ensure people are in place to respond as needed.

Levy keeps an eye on multiple weather feeds along the east coast since DLC Management looks after several properties in the region.

Preparing for abnormal possibilities is part of the contractor’s strategy, Dempsey said, adding he doesn’t like to be blindsided when it begins to snow during such infrequent events as office parties.

The period spanning mid-November – including U.S. Thanksgiving – to Christmas is critical for sales at properties Levy manages, and it’s important to have every parking spot available for customers.

“These stores do incredible amounts of business, and losing even one parking place can be difficult,” Levy said.

The earlier, the better
The earlier the property management company and contractor are aware a significant snow event is imminent, the sooner communications can begin, and the earlier preparations can be executed, Dempsey said.

Once a storm is underway, the next line of communications must be established, Dempsey said.

“Is your pre-storm plan activated and is it going according to plan?” he said. “What is the procedure during the storm for any complaints or service issues?”

Levy said he has fielded calls from tenants who complain no one is ever there to clear snow following a storm. He added, however, it’s fun to answer such calls when they’re made after snow has been cleared.

Levy said tenants have been known to complain early in the morning that a parking lot hasn’t been salted when, in fact, ample salt has been put down. It’s just waiting for the sun to rise and provide a heat source before it starts working.

Communications made during a storm can be provided every couple of hours or what is deemed appropriate. Post-storm communications should cover such matters as the forecasted temperature for the next day and whether additional salt is required, any changes in procedure that might be altered and any improvements that are required.

Levy said as a landlord he must take an annual look at his tenant mixes to see if the property’s current snow plan is still relevant. One of his company’s shopping centre properties in Buffalo will soon have a supermarket added which is expected to attract an extra 1,500 vehicles daily.

“That means parking will be at an even greater value, and the spaces that we have will be even more important.”

An expansion of that magnitude changes the property’s snow plan, he said.

Dempsey said post-storm communications include a review of everything that went right and ensuring those responsible are aptly rewarded. It’s also important to review anything that went wrong and determine where improvements are needed.

Damages are bound to happen when removing snow, and such matters as hitting a car or backing into a light pole must be addressed immediately, he added.

Levy said there are issues associated with sidewalk snow removal that also need addressing, including ways to avoid such things as damaged turf, compromised light poles and “messed up” catch basins.

Repair costs aren’t always the responsibility of the contractor, he said, adding some of the blame might be the property management company’s or perhaps the costs can be split in half.

“It can be challenging, and sometimes these things slip around,” Levy said.

Dempsey said that during the off-season, improvements can be identified to make the contractor’s life easier.

“It’s a recipe for success when everyone is communicating properly,” he said.