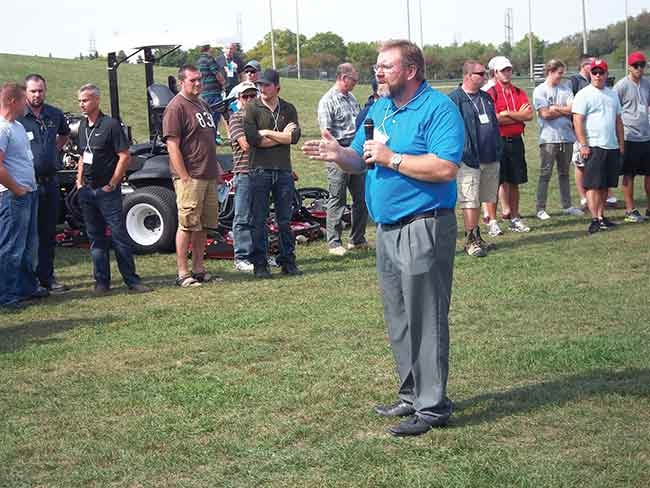 When it comes to fertilizing sports turf, it’s done not so much to achieve a greener, more aesthetic colour, but to promote growth.

Such was the take-home message delivered by the University of Guelph’s Dr. Eric Lyons at the 29th annual Sports Turf Canada field day at Toronto’s Etobicoke Olympium in September.

“We fertilize to keep the turf growing because if the turf isn’t growing, it’s not recovering from wear,” he said.

The only reason sports turf managers should be concerned about colour is because it’s an indicator of growth, Lyons added.

He said the mindset among the general population who may not understand agronomics, needs to change. Some who see a field’s surface turning a little yellow must understand that’s not the call to fertilize. Instead, fertility will be required if the turf isn’t growing at a pace to help it recover from wear. The amount of wear will vary from field to field, depending on traffic and usage.

“If you can’t mow it, don’t grow it,” Lyons said, referring to an often-used rule of thumb for deciding when to fertilize. The more a field is used, the more growth it will need to recover. Higher-use fields will consequently require more fertility than playing surfaces that experience limited usage.

Some municipalities may have a high-profile field that is used sparingly, and the turf manager may wish to fertilize it more frequently to ensure it looks good. Doing so, however, means he will have to mow more often.

“You need more nitrogen on the sand to maintain the same growth as you would on soil.”

Strike a balance
A balance must be struck between recovery and excessive growth. While many sports turf managers from larger urban centres may not see their fields for several weeks at a time, some in smaller municipalities may be the ones out mowing and applying fertilizer to their playing surfaces. The latter will have a better understanding of the need to change their fertility plan if they see they are dealing with excessive growth repeatedly.

“There has to be a system in place where our eyes on the field can feed back to the decisions made in the building, and that means understanding excessive growth is a bad thing.”

Sports turf managers must also understand that mowing frequency is important for growth and recovery.

When clumping and bare soil can be seen, they are signs the field is falling behind its usage rate, Lyons said.

“Eventually, if wear isn’t slowed down and fertility and mowing frequencies are brought up, you’re going to see a field deteriorate.”

Lyons said there is no value-cost ratio associated with sports turf because there is no yield that leads to profit. Soil testing, therefore, “loses its lustre.” A sports turf manager’s primary concern should be the amount of nitrogen being put down, and then worry about the quantities of potassium and phosphorus.

Nitrogen cannot be tested in the soil, yet it’s the most important nutrient. Many believe that “upping the organics” will mean more nitrogen will be released into the soil, but it can vary significantly from one field to another, he said.

How does a sports turf manager determine his nitrogen requirements? Lyons said he must monitor his growth rates and colour, and strike a balance between recovery and wear. What matters, he said, is how much the field is growing when a certain amount of nitrogen is put down.

Fertility is needed when the turf is growing and is physiologically active.

Lyons said he doesn’t like to see fertility occur after the turf has stopped growing because much of it “goes into the ether. It can leach, it can volatilize. In the spring, we can’t find it.”

Plants require good fertility going into times of stress and need to be provided nutrients for growth and recovery following stress periods.

Phosphorus and potassium
Phosphorus and potassium mustn’t be forgotten as elements required for turf to grow well. Soil testing will determine a soil’s needs for nutrients other than nitrogen. If the test determines “no response” for phosphorus, it means little will have to be added. A medium response, on the other hand, will require the addition of an average amount.

Less phosphorus will be required to maintain turf than to establish it, Lyons said, posing the question as to why sports fields require more phosphorus or more nitrogen. They are needed for better recovery, and it is nitrogen that drives it. Because more nitrogen is put down, the plant requires more phosphorus and potassium. He said a better indicator of the amount of potassium needed is the nitrogen rate as opposed to the results of a soil test.

When purchasing a season’s worth of fertilizer, municipalities tend to buy in bulk in order to realize a discount. Sports turf managers must ensure there is enough nitrogen available for each growing month, but that doesn’t necessarily mean fertilizer must be applied every month. If urea is used, it would have to be applied about every four weeks, but a slow-release source can be put down every other month. Lyons said this doesn’t mean having to go out with a full fertilizer every two months, but suggested making sure sufficient potassium is available in the spring, summer and fall.

“A lot of people load up on potassium in the fall to improve stress tolerance. If you’re sufficient, adding more doesn’t help. In fact it can hurt, so you have to be careful.”

“So by dividing up how many times we put down phosphorus in a year, we actually reduce the risk of loss to the environment.”

He recommended applications be made in the spring and early fall to reduce the risk.

The rule of thumb when planning a sports field’s fertility plan is to apply a general-purpose fertilizer with supplemental nitrogen.

“So you can have a large supply of general-purpose fertilizer that you can use on all your fields.”

Some fields may get two applications of that fertilizer based on the annual nitrogen rate. Fields low in phosphorus or potassium or which have lower-quality soils may require three applications of a general-purpose fertilizer. A high-use field demanding more recovery will need more nitrogen that can be provided on a supplemental basis.

“It’s because they’re not keeping up with the nitrogen rate.”

Lyons continued his presentation outdoors, demonstrating the importance of proper spreader calibration and the need to overlap carefully to avoid growth surges in unwanted areas.

When spreading up and down, a 50 per cent overlap along the edges is suggested to ensure even distribution. Larger prills will be thrown further than smaller ones. Momentum will determine how far something is thrown. Because larger prills are thrown further, the need to overlap is lessened.

“If you don’t apply properly, if you don’t overlap properly and you don’t calibrate properly, a mistake lasts not for 50 days. It lasts most of the summer, and maybe into the next year.”