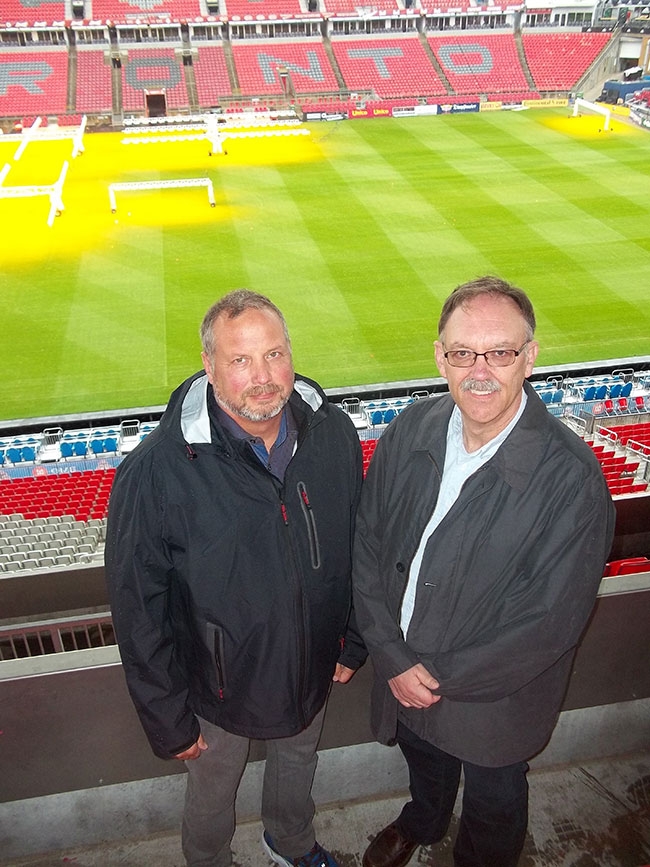 Tab Buckner, left, president of Sports Turf Canada, and vice-president Ken Pavely are determined to push the organization forward in order to establish a presence in provinces currently not represented by the association. Photo: Mike Jiggens

Sports Turf Canada is continuing to spread its wings across the country as it celebrates its 30th anniversary. The Guelph, Ont.-based organization that promotes better and safer sports turf reported a 20 per cent increase in its membership from 2015 to 2016 and is aiming to build it up further this year.

The association held its annual general meeting at Toronto’s BMO Field in early April, reporting on its recent growth as well as projects it is spearheading to build its brand. The association began as an Ontario organization – formerly called the Sports Turf Association – and 80 per cent of its total membership is based in Ontario. Its next largest representation is from British Columbia at 10 per cent. Alberta accounts for four per cent of its membership while New Brunswick claims two per cent. The remainder is spread out over the other provinces.

Tab Buckner, parks operations manager for the Township of Langley, B.C., is beginning his second year of a two-year term of office as president of Sports Turf Canada. One of his objectives as president, he said, was to gain a foothold for the association in Saskatchewan and possibly Manitoba, and some coals are already in the fire in that part of Western Canada.

Sports Turf Canada developed a working relationship with the Western Canada Turfgrass Association (WCTA) in recent years, helping to establish a membership base in British Columbia. A similar effort was made in New Brunswick to establish an Atlantic Canadian presence. Alberta became the next province to significantly become involved with Sports Turf Canada, due largely in part to its peripheral attachment within the WCTA.

“It would be nice to have field days in every province,” Buckner said.

In spite of the success of the Alberta field day in 2016, it likely won’t be until 2018 that another association field day returns to the province. A western Canadian field day is slated for British Columbia this year, however.

Sports Turf Canada has held three field days so far in Atlantic Canada with two in Moncton, N.B. and another in Halifax, N.S.

“We seem to get the best bang for our buck in Moncton,” Buckner said. “It’s more regional and we get a better turnout.”

Another objective of Sports Turf Canada’s is to make available its educational course offerings to untapped regions of Canada.

“I’d like to try to see if we can in this last year (of his term of office) right the ship and try to get us to a break even point with our finances,” Buckner said, adding the plan will involve stepped up recruitment initiatives and the availability of more educational courses. “That’s where we can generate our revenue because we don’t have a conference like other organizations do.”

He said Sports Turf Canada wishes to reduce the size of its board of directors in order to make the decision-making process more manageable. Currently, the board includes its president, vice-president, past president, secretary, treasurer and nine directors. Two director positions became vacant by the time of the association’s annual general meeting, but the board chose to fill only one as a step toward its pared down board size. All but four board members are from Ontario.

“You want to have regional representation for sure,” Buckner said. “It’s still a very Ontario dominated board.”

He said that as the association becomes established in other unrepresented provinces, perhaps officials from those areas might become new board members to give Sports Turf Canada a truly national scope.

Poised to succeed Buckner as president in 2018 is vice-president Ken Pavely of Lawn Life Natural Turf Products. He echoed Buckner’s sentiments about the need for Sports Turf Canada to become better established in such provinces as Saskatchewan, Manitoba, Quebec and the remaining Atlantic provinces aside from New Brunswick.

“I think we’ve done a pretty good job of spreading our wings, and certainly we see some interest in Alberta,” he said.

Pavely said efforts to become established in other provinces will take both time and money to accomplish, but added it’s in the best interests of the association.

“We’re going to continue to fine tune our educational offerings and really make them high value for people.”

Other board members include:

Anne Baliva has taken over as Sports Turf Canada’s executive manager, succeeding Lee Huether, who held the position since 1997. Baliva officially took over the position at the year’s outset, coming to the association from the water environment sector. She brings with her several years of experience in association management at both the provincial and national levels.

She said Sports Turf Canada plans to undertake a significant membership recruitment and retention campaign in the fall.

Huether was honoured at the annual general meeting for her 19 years of service to Sports Turf Canada.

Colleen Hopkins, who owns a custom picture framing business in Guelph, will be aiding Baliva as administrative assistant.

Lyons said there has been a significant shift over the past 30 years with sustainability in sports field management. In the past, the goal was to deliver a sports field with agronomics along with the environmental impact of those agronomics. Today, he said, it’s more about economics and communication and “making sure that our clients and stakeholders have our backs.”

It’s the communication skills of sports turf managers that allow them to be sustainable, he said.

Lyons said he is experiencing first hand the social and economic side of sustainability through his involvement in a WCTA assessment of synthetic and natural turf fields.

“Here I am, a plant biologist, doing economic research.”

He said the project is something that is new and exciting for him, and he hopes the information derived from it proves useful for future decision-making.

Sustainable action, Lyons said, means not using something up so that it’s no longer available for future generations.

Tab Buckner, left, president of Sports Turf Canada, and vice-president Ken Pavely are determined to push the organization forward in order to establish a presence in provinces currently not represented by the association.

“We must work within the world around us,” he said, meaning that existing ecosystems cannot be eliminated and that we can’t rely on unknown innovations “to save us later. That’s what it means to be sustainable.”

Municipalities cannot afford to exhaust resources, Lyons said. If a sports field is put down, the soil is properly looked after and the surface is regularly maintained, it can always be converted into a community garden or other effective green space.

“But if you put cement there, you can’t. You’ve destroyed that.”

Lyons said he is an advocate for natural turf fields and other municipal green areas because they are more sustainable.

With the assistance of the Canadian Turfgrass Research Foundation, an educational poster has been developed by the Chimera Group to serve as a communications tool in advocating the environmental benefits of turfgrasses.

Lyons said sports turf managers must convince municipal councilors, stakeholders and communities that sports fields are important for more than just play. He said such groups should be aware:

Lyons said all plants prevent runoff and erosion, give off oxygen and sequester carbon.

In addition to its array of environmental benefits, turfgrass has the unique quality of being able to be played upon. It’s a safer surface to play on than cement, gravel and even synthetic turf, Lyons said.

The more things change, the more they stay the same, he added, but they are also different. Fields still need to be aerated to reduce compaction. Although sports turf managers have more sophisticated equipment at their disposal today, they still need to relieve compaction on their fields so that water movement can be achieved.

Overseeding is not a new practice, but recent research now gives justification for it. It shows that weeds can be reduced, thereby improving the safety and quality of turfgrass fields.

“You guys knew for years that overseeding a field made a field better. All the research did in this case was show you a better way to do it and give you justification for doing it.”

Lyons said he no longer advocates a starter fertilizer on sports fields, adding most soils aren’t deficient in phosphorous. Phosphorous should be applied only if a soil test finds a deficiency.

He reflected upon the evolution of Sports Turf Canada’s official quarterly publication Sports Turf Manager and its editorial content. The publication now contains a mix of agronomic-themed articles and those that pertain to communication and professionalism.

“We have to become professional growers, managers and educators. We just can’t be grass growers anymore.”