Commercial application of robotics starting to make headway in Canada 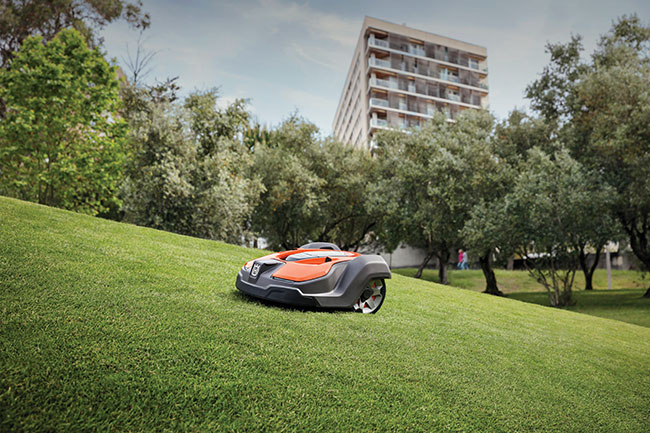 It may look to many like a scene from a science fiction movie as unmanned, mechanized machines move about cutting grass in random patterns across corporate properties, sports fields and other green spaces of significant square footage, but it’s science fact at work and advanced technology that is now making inroads in the commercial turfgrass market.

Robotic mowers have been in use for a number of years now in the residential market, but professionals are starting to take a shine to these machines as well. Europe was the first continent to adopt robotic mowers and has realized substantial growth with their autonomous technology.

The technology has been catching on in North America and, although growth is slower on this side of the Atlantic, it has been significant, he said.

“As adoption grows, you’ll start to see more and more of these. As the technology gets better and better, the adoption will grow.”

Vollbeer said Echo has been selling robotics in the United States for the past few years, but it’s been only this year that the Canadian market has been tapped.

“Our target market with these products are commercial landscapes.”

Jenna Sanders, director of sales for Husqvarna commercial robotics in North America, said robotic mowers are being used for just about every type of commercial application.

“Commercial green space managers are seeing the cost benefits, the reliability and consistency of robotic mowing,” she said, adding commercial property management companies are realizing a return on investment in one to two years.

Sanders said the mowers’ consistency is a key attribute as well as their ability to be operational at all hours of the day.

“Because they work all of the time and they keep the grass consistently mowed, you don’t have to worry about if it rained three days in a row and now the grass is really high and landscapers are trying to catch up,” she said.

Robotic mowers move in a random pattern inside an electromagnetic field delivered by a buried wire. Reading the perimeter wire prevents the mowers from straying onto roads or sidewalks or anywhere else they shouldn’t be. They can be scheduled to mow within their defined areas at optimal times of the day, such as between games and practices in sports field applications or after dark. 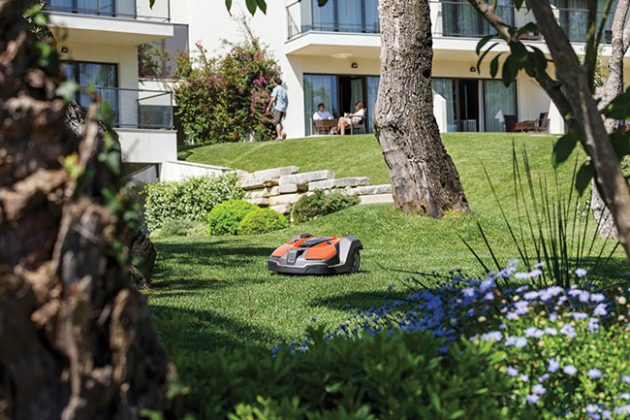 Condominium properties and other large acreage green spaces are seen as ideal venues for the commercial application of robotic mowers. Husqvarna photo

Less leaf blade cut
“The idea is to give it as much time to work the area as you can,” Vollbeer said. “When it’s doing that, it’s cutting off just a little bit of the grass blade at a time.”

The robot maintains a prescribed cutting height whereas conventional mowing may require more of the leaf blade to be cut, depending on when its operator can get to the job site. Clippings are alleviated through robotic mowing and the plant tends to be healthier, he said.

“You get a very nice looking, low cut parcel of property that is healthier, has a tendency to green up a little bit earlier in the spring and stays a little healthier in the fall.”

Sanders said only about an eighth of an inch is being mowed at a time and the cuttings are mulched.

“You use less fertilizer and some of the chemical treatments, so the quality of the turf just looks so much better over time,” she said.

When people see a robotic mower at work, knowing that its cutting disk is much smaller than the deck of a commercial zero turn, they are inclined to think it’s meant for residential use, Sanders said.

“There are a lot of applications that we haven’t even scratched the surface of covering with the lineup we have today,” she said, noting manufacturers are already looking ahead to such large acreages as golf courses, sports fields and air fields.

In 2019, Husqvarna launched a GPS-oriented robotic mower that is wire-free. Advances have also been made in connectivity.

“Having GPS and cellular connectivity – being able to control the mower from your app – we have a fleet services dashboard now for our commercial managers so you can pull it up on your phone or laptop and see your entire fleet of mowers, and you can control them all with one click of a button.”

If a significant rain event is forecast and the property manager doesn’t want to risk the mower from encountering flooded areas, he can click “park” to send it back to its charging dock.

“With the introduction of the wire-free solution, it opens it up for more sports fields because if you need to aerate, there is always the concern about cutting a wire,” Sanders said. “You now eliminate the wire you might nick or damage when aerating.”

No emissions, low noise levels
He said that in addition to their agronomic attributes, robotic mowers have other significant benefits. Without the need for fuel, there are no emissions, and noise levels are greatly reduced.

“They’re completely quiet and are actually hard to hear until you get right up on them,” Vollbeer said. “They’re very unobtrusive and you wouldn’t even know they’re there other than the grass is cut and you see a rather large, grey robot traversing the area from time to time.”

The robots utilize sonar to detect obstacles in their path. Upon detection, their forward speed automatically slows from a maximum of 2½ miles per hour.

“Once it detects an object it will reduce its speed to just a fraction of that,” Vollbeer said, adding a “bump” sensor at the front of the mower will activate, sending the robot in another direction.

The mowers communicate data to a portal. Once the robot is activated, it can be sent a command via the portal and it will provide real time information as to where it’s located on the parcel being mowed. If it’s stolen from the property, real time data will help locate it.

About two hours of run time are provided for each hour of charge time.

New features and functionalities continue to be incorporated into robotics, Vollbeer said.

“As that continues to grow, you’ll see the utilization grow and at some point – probably within the next 10 years – it will make up a pretty substantial amount of the mowing equipment that’s sold in North America,” he said.

Sanders said Husqvarna has introduced an all-wheel-drive model which allows steep slopes to be mowed.

Vollbeer said the take-home message behind robotic mowing is that it represents a major paradigm shift in the way grass is mowed, and people must understand that the method of mowing is noticeably different than that of conventional mowing.

“While it’s a great product, it’s a little bit different,” he said. “It works in a random pattern. It needs as much time to mow as you can give it, but it’s always going to show up for work and it’s never going to complain about what it has to do. It’s always going to work, but it still needs to be managed. Just because it always does what it’s told doesn’t mean you shouldn’t pick up on it. There is less human interaction required, but they do need human interaction to make sure they are functioning and working properly.” 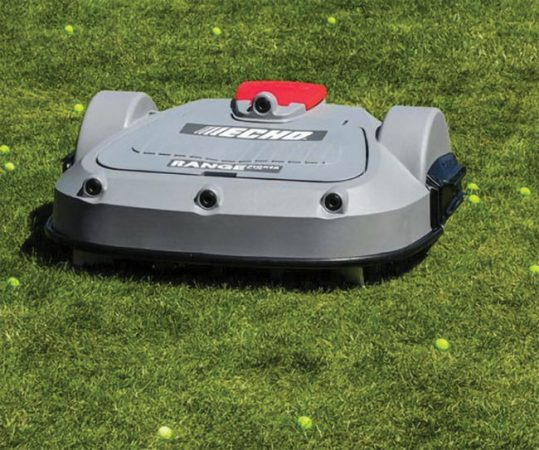 Robotics permits mowing, ball picking done in tandem
Echo’s robotics division has introduced a product aimed at the golf market that works in tandem with robotic mowing. An autonomous ball picker, coupled with a robotic mower, picks up balls while the driving range is simultaneously mowed.

Conventional methods of picking balls can result in scalped balls and partially buried balls because it’s not a clean pick. The mower-picker combination accomplishes two tasks at once, but even the mower working alone can still do its job with a range blanketed with balls.

“With just the mower itself traversing and mowing you’ll always keep that area mowed and never have to worry about chopped up golf balls or losing golf balls,” Jake Vollbeer, national sales manager for Echo’s U.S. robotics division, said. “It just continues to keep that height of cut.”

The range picker averages about 100 collected balls per traverse, dropping a full load of 300 balls into a ball management system when full before making another sweep. It is capable of picking up about 12,000 balls on a normal cycle.

Driving ranges never need to shut down to allow mowing, and both the mower and picker can continue to function after dark.

Vollbeer said the system helps prevent clashes between club pros, who want to keep the range open as long as possible in order to drive revenue, and the golf superintendent, who needs to mow the range regularly yet finds scheduling difficult when it’s in constant use.