Summer patch is a turfgrass disease golf superintendents would rather do without, but it can be dealt with successfully through good management practices and strategic timing, a plant pathologist from Rutgers University told an assembly of golf superintendents in the spring.

“Anything you can do to reduce compaction, to improve rooting quality and rooting depth, and improve the vigor of the turf, will definitely help you in terms of suppressing the visual symptoms,” Dr. Bruce Clarke, chairman of the department of plant biology and pathology at the New Jersey institution, said while speaking at the 12th annual IPM seminar series, sponsored by Master’s Turf Supply, at Granite Ridge Golf Club in Milton, Ont. 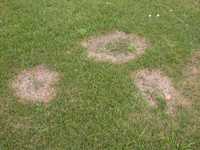 Summer patch is more prevalent on greens than tees and fairways although it can appear there as well. Its major hosts are surfaces of poa annua and fine fescues.

“Bent will succumb to summer patch, but only in exceptionally warm climates of North America where bent doesn’t want to grow.”

Areas such as Georgia, Texas, South Carolina and parts of North Carolina are home to tremendous heat loads for extended periods of time, weakening bentgrass to the point where the pathogen can jump on top of it.

In southern Ontario, however, bentgrass tends to be tolerant of summer patch, Clarke said.

The disease typically shows up on collars and approaches where there is a lot of foot traffic. Summer patch and compaction generally go hand in hand, he said.

Summer patch is known for its distinctive circular patches or doughnut-shaped patches (often referred to as “frog eye”). Clarke said the perennial disease is easy to identify when it first begins to develop. He said he will look for small three or four-inch-diameter patches with green grass growing in the centre. He will take a cutter sample in which half is healthy turf and half is affected turf. From the sample, he will rule out any foliar issues by looking for the presence of foliar fungi. If none is found, the sample will be split in half to piece out the individual plants that are starting to decay, indicating where the summer patch fungus will be seen. It will grow on the outside of a leaf sheath down into the base of the plant and into the lower root system.

“This fungus is only a problem within the first inch or two inches of the soil. It’s not a deep profile pathogen.”

The fungus appears as a dark brown, “chocolate” mycelium on the outside of the root system.

Clarke showed a photographic example of how the fungus decayed the water conducting system of a root, noting the plant could literally be floating in a bucket of water and still be wilted because of its flawed root system.

The fungus is on the outside of the root until the soil temperature reaches about 15 degrees Celsius at a four or five-centimetre depth. Once that soil temperature remains consistent for five or six consecutive days, that’s the time for the first fungicide application, he said. Going in when the fungus activates with sufficient water to carry the fungicide to the base of the plant to protect the leaf sheath is the goal. This will help protect the plant going forward.

Clarke warned that if this window of opportunity is missed by several weeks or a month, it will be difficult to “gain the upper hand.”

A photograph from 1964 was presented to Clarke’s audience, depicting an address by U.S. President Lyndon Johnson on the White House lawn. The lawn was covered in summer patch, but at the time there was still an air of uncertainty with regard to the pathogen. It was actually called fusarium blight at the time.

It was found fusarium was associated with the leaves, and so it was thought that was the cause which infected the plant. The true cause of summer patch is a root-infecting disease, and Clarke said it wasn’t until the mid to late 1980s that researchers were able to culture the fungus out. Pathologists at that time had the ability to culture slow-growing, root-infecting fungi with new selective media.

By 1985, plant pathologists were able to culture out these organisms which had always been there but could never be identified. From the late 1980s until only recently, efforts have been made to develop a set of best management practices for superintendents to adopt. Good techniques exist today that allow superintendents to get a good handle on the disease, Clarke said.

Once the problem exists, its future prevention becomes the goal. He said superintendents should think about conditions which favour the disease as well as tweaking management practices to reduce the severity.

Summer patch is a warm weather disease, but the infection takes place in May or perhaps early June in southern Ontario when soil temperatures at a four or five-centimetre depth exceed 15 degrees Celsius.

“We’re dealing with warm weather but not necessarily hot weather. Your soils warm rather quickly. We typically get favourable conditions in about the second or third week in May, and perhaps a little bit later around here.”

It takes six to eight weeks before any visual symptoms are detected.

“That’s why it’s so much harder to control this disease than dollar spot.”

When dollar spot is detected, an applied fungicide hit just right will allow the symptoms to be mowed out within a couple of days. Clarke said with summer patch, once symptoms are seen in July or August, it means planning already for the next year.
Excessive soil moisture, high temperatures and humid conditions bring on symptoms in July and August once the fungus has reached the root system.

Low mowing heights will enhance the disease, Clarke said, adding that if the height of cut on greens is dropped when summer patch is present, it could spell trouble.

Research began in the 1990s to look at the impact of manganese with summer patch. The studies began with the element’s impact on take-all patch, but little effect was noted. Clarke said that in hindsight, researchers were working on soils that had sufficient levels of manganese.

He said where manganese can have an effect on the soil include sandy sites where the element may not be present in large quantities or the pH is tying up manganese in the soil.

Soil compaction and root diseases go hand in hand, and summer patch is no exception, Clarke said. Cultivation has been recommended for several years to reduce compaction and the incidence of summer patch, but the question of whether solid tines were as effective as hollow tines remained unanswered.

Research was done on annual bluegrass fairways which had been heavily compacted and inoculated with the fungus every half-metre. Aerification was done in early spring and October with hollow tines, both shallow and deep. Researchers looked for a reduction in compaction (which Clarke said was a given) and a reduction in summer patch.

He said it’s clear that summer patch gets worse going from non-compacted to moderately compacted to heavily compacted soils. The patches get bigger from one scenario to the next.

“You’re compacting it, the turf is shallow-rooted, it’s poorly-rooted, the plants are weakened, and it plays right into the hands of the fungus.”

A heavily-compacted soil which is aerified with a shallow tine at a depth of about four inches will see a reduction in the size of disease patches. The fungus isn’t being eliminated, Clarke said, because it’s still on the roots, but plants are able to better sustain themselves, resulting in lessened visual damage.

It’s known that compaction enhances the disease and aerification reduces its severity by shrinking the patch sizes. Clarke said spring timing may be a little more effective in reducing patch sizes than fall aerification.

“If you aerify in the fall, by the time the fungus starts to infect turf in late May or June, those holes have closed up. The benefits are less pronounced whereas if you’re aerifying in April, you’re seeing the benefits of the aerification playing out into the infection process in May.”

He cautioned not to aerify when the disease is starting to activate because, in many cases, it will lead to enhancement of the disease.

Solid tines have the potential to enhance summer patch, Clarke said, particularly if that method of aerification is done in late spring or early summer.

He suggested aerifying earlier in the season, avoiding late season aerification when soil temperatures will exceed 15 degrees Celsius, and to use hollow tines rather than solid tines.

Research shows manganese applications dramatically reduce the severity of summer patch, even in the absence of aerification. The fungus can tie up manganese in the rhizosphere which makes applying it through the foliage as the preferred option, Clarke said. Another benefit is the unnecessary concern about soil pH affecting manganese availability when applied with a soluble foliar spray.

He said any fertilizer that will drop pH by even a couple of tenths of a pH unit will lead to a visual reduction in disease. Sources such as calcium nitrate or potassium nitrate, which are likely to elevate pH levels, tend to enhance the problem, he added.

It is best to fertilize in cool weather or cautiously in warm weather with ammonium sulfate, Clarke suggested, adding there is nothing wrong with nitrate fertilizers, but, if summer patch is present and a lot of nitrate fertilizer is used, it can enhance disease issues.

Clarke warned not to aerify when symptoms of summer patch are present.

“When you have symptoms, you probably have 50 or 60 per cent of the roots completely shot.”

Aerifying when symptoms are present means punching through the remaining healthy roots, “and you’re pushing the plants right over the edge.”

Aerifying when symptoms aren’t present is best, Clarke said, recommending early spring after greenup. He advised not to wait too late, especially once soil temperatures reach 15 degrees Celsius because the fungus is then activated.

Healthy areas should be aerified first, he added. Tines should be washed between one location and another to prevent the spread from an infected area to a healthy area.

Clarke said there are now four chemistries available today to suppress summer patch. The most effective, he said. are the DMIs (demethylation inhibitors) and the strobilurins.

Related
Understanding aeration: keys to healthy turf
Learn the signs, symptoms of lawn problems
Like it or not, it’s time to think ahead to the heat of summer
Hot, humid summer of 2010 made turf maintenance difficult