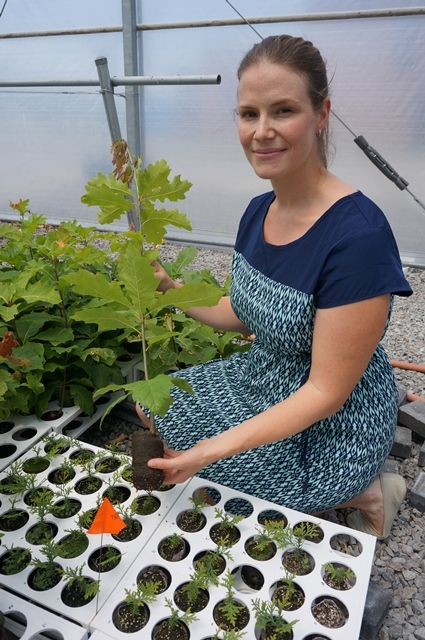 By Kelly Daynard for AgInnovation Ontario.

The differences between two young oak trees in a greenhouse at the Vineland Research and Innovation Centre (Vineland) are immediately noticeable. Not only is one twice the size of the other, but its root base is much thicker.

Both trees were planted into the same growing medium on the same day last April. The difference is that the smaller one was grown in a traditional black plastic plug tray, common in the nursery industry, while the larger one was grown in a revolutionary new propagation tray designed by Vineland.

Dr. Darby McGrath is a nursery and landscape research scientist who has been at Vineland since 2013. A lot of her work in the past has focused on urban tree projects—with a special interest in growing trees that will survive and thrive along Canadian highways or urban boulevards.

“Those are challenging plantings,” McGrath explained. “It’s the opposite of what a tree would want.”

She said that the soil is often compacted, there can be little water, and the trees face added stresses from pollution and road salt.

To improve trees’ survival in a setting like this, it is important that planted seedlings are as healthy as possible with strong root architecture.

“Once you have the ideal root structure, the seedlings will do better,” McGrath said.

Unfortunately, the shape and structure of traditional plug trays—even those marketed as being “ideal” for seedlings—can lead to root malformations and defects. As the roots grow and descend into the plastic cells, they circle inside the plastic walls or are driven down instead of growing radially out. The hypothesis is that containers that offer greater soil volume, better air flow and minimal contact with plastic sides produce better seedlings, and the size differences between the two oaks planted this spring are testament to the fact that McGrath and her team are onto something.

“It’s really cool to see these results,” McGrath said. “In theory, it all made sense but when you see it performing the way it is performing, that is really gratifying.”

The prototype trays were designed in partnership with A.M.A. Plastics Limited, a family-owned business out of Kingsville, Ont., well known in the horticulture and nursery industries.
“They’ve been a wonderful partner,” said McGrath. “They genuinely want people to grow good trees.”

McGrath has presented her results to attendees at a local meeting of the International Plant Propagators’ Society and is looking forward to testing her findings on fruit tree seedlings as well.

Her team is also looking for a manufacturer for the trays and hopes to release them commercially in Canada and the United States in 2017.

Vineland Research and Innovation Centre is supported by Growing Forward 2, a federal-provincial-territorial initiative.