Thornhill Country Club has dramatically cut back on its pesticide usage over the past several years. Photo: @Ron Alvey / Adobe Stock

Golf courses in Ontario were given a wake-up call a little more than a dozen years ago when the provincial government decided it wanted to clamp down on chemical pesticide use on turfgrass. In 2009, the Ontario cosmetic pesticide ban was enacted, and golf courses were originally going to have to comply with the same legislation that has long since impacted the lawn care and sports turf industry sectors.

Golf fought hard to be granted an exemption to the ban, but it came with the stipulation that several requirements were necessary in order for courses to continue to use certain products. At the very least, it motivated golf superintendents toward adopting strategies that were more environmentally friendly.

Some clubs went the extra mile, cutting back their pesticide usage considerably. This achieved two purposes – it left a healthier footprint on the golf course and freed up budget money that could be utilized elsewhere.

The Thornhill Golf Club in the Greater Toronto Area was one such facility that went down a new path in 2009. Approached by Global Organics Partners (GOP) – a group of academic researchers – the club was told how it could significantly reduce its pesticide use without compromising the quality or conditioning of the golf course.

Greg McFarlane, superintendent at Thornhill for the past 14 years, shared his strategy of substantially decreasing his pesticide usage over the years in a virtual presentation offered during the winter’s Ontario Turfgrass Symposium.

“One thing that was made clear was that they (GOP) wanted to do this without impacting the quality or conditioning of the golf course, which I found very intriguing,” McFarlane said.

At the time the Ontario government was planning its ban on cosmetic pesticide use, McFarlane said he feared a mandated discontinuation of products he had been accustomed to using for years, but he felt GOP’s proposal was something worth trying. Thornhill’s board of directors and club committees were also on board with it.

The relationship between Thornhill and GOP began in 2008 and remains intact today. The researchers, who are mainly academics from U.S. institutions, are not only experienced in diseases, insects and weeds, but in all aspects of turfgrass management, including cultural practices, biological approaches and other areas of turf maintenance.

Up until 2020 – when the COVID-19 pandemic presented a roadblock – a researcher from the group visited the golf course and discussed various issues of concern to McFarlane, all the while sharing with him the latest research data.

“The visits give the researchers an opportunity to see the course and to observe the issues I’m dealing with at any given time throughout the season,” McFarlane said.

The meetings, which could be often in some years, helped McFarlane remain focused on his goals, including the reduction of pest control products while maintaining the highest possible golf course standards.

Topdressing, aeration, fertility and irrigation practices were looked at in the beginning as a means of reducing Thornhill’s chemical dependency. Although the club’s greens have demanded the most attention by GOP’s visiting researchers, sufficient attention is also given to fairways, tees, roughs and naturalized areas.

Century-old greens
Many of Thornhill’s putting surfaces are the original pushup greens built almost a century ago. The 18-hole championship course has one USGA-spec green while the adjacent nine-hole executive-length course has a combination of original and USGA greens.

“Uniformity isn’t there,” McFarlane said. “We have a mixed bag of soils. We have microclimates to deal with.”

When McFarlane began working at the Thornhill club as an assistant superintendent in 1995, the greens still had some bentgrass, but had become predominantly poa annua over the years. The golf course also had ample tree cover during his early years, but a significant amount of tree removal and pruning have since been done to maximize sunlight penetration.

GOP’s objective at the outset of its working relationship with Thornhill was to become better acquainted with McFarlane’s course management philosophy and to learn more about the specific issues he faced.

“During the last few years, we’ve started to see some improvement, following some of the recommendations we’ve been given,” he said, adding GOP doesn’t sell pesticides, but will recommend certain products, rates and timing of applications in certain situations.

The goal has always been to reduce inputs without negatively affecting the quality of the golf course. For example, greens can’t be rendered too fast because it will lead to a slower pace of play, McFarlane said.

One of the key components of GOP’s contribution was the assignment of an environmental impact quotient (EIQ) to pesticide products. Developed at Cornell University and based on research of pesticide products, EIQ serves as a guide to see where reductions are being made. The higher the EIQ number assigned to a pest control product, the greater its impact on the environment. 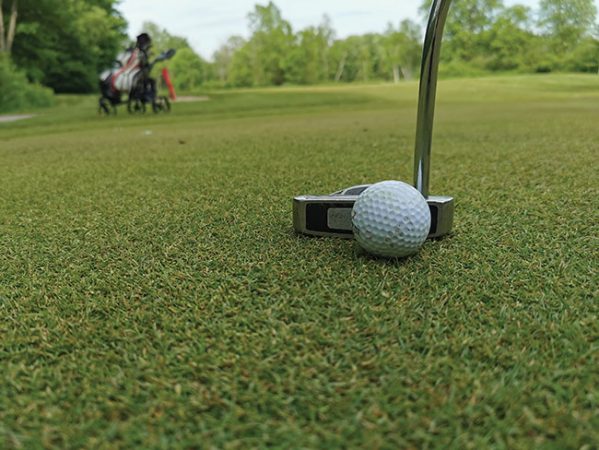 Thornhill’s greens have received the most attention from the Global Organics Partners researchers over the years, but tees, fairways and roughs have not been neglected
Photo Courtesy of Mike Jiggens

Steadily falling EIQ
Auditing firm KPMG looked at the EIQ numbers of Ontario’s top 100 golf courses, finding they averaged 1,100. Since 2015, the Thornhill club has remained steady at between 50 and 60 with the number dropping to a low of 37 in one year.

When Thornhill began working with GOP, McFarlane said he thought the club might have to spend more on biological inputs and labour to achieve its goal of pesticide reductions. In 2008, the club spent about $102,000 in pest control products. Costs dropped slightly the following year, but a significant decrease was realized in 2010.

The golf club was challenged that year when a major storm hit the area in late 2009. It began with heavy rain, but soon turned to freezing rain. As temperatures dropped, about two inches of solid ice formed across the entire golf course property.

“It was pretty ugly,” McFarlane recalled. “You could have skated from one end of the course to the other.”

With the turf yet to enter dormancy at the time the storm hit, McFarlane said he anticipated some serious issues by the time spring of 2010 arrived.

“We were dealing with dead turf all over – fairways, tees, greens, even rough areas.”

Thornhill’s relationship with GOP was at its most important in 2010, he said. The group of researchers recommended seed varieties and seeding strategies as well as specific fertility and irrigation practices.

“In the end, we came out of that spring in pretty good shape.”

The club made good inroads by introducing bentgrass into its greens in 2010. Although some poa has since crept in, significant bent coverage remains.

Little spraying was required in 2010, allowing costs to drop to just below $73,000. Pest product expenditures from 2011 onward averaged between $96,000 and $97,000, but strides were being made toward reducing EIQ numbers.

“Each year is different,” McFarlane said. “Pressures vary from year to year, and weather conditions can have an impact.”

Growing pains
McFarlane said there have been a number of “growing pains” along the way that have resulted in short-term green speed reductions and some brown turf – some of which he attributes to human error on his part due to questionable decision making. Thornhill’s irrigation system is also 25 years old now and may not be as efficient as it once was, he added.

“Not using pesticides has had nothing to do with any issues we’ve had on the golf course in that time.”

But, the ongoing program with GOP has allowed Thornhill to consistently emerge each spring in good shape.

With his budgets reduced during many of these years, McFarlane said the cost savings were a blessing. His input costs have also included fertilizer, which is about half of what it used to be. His budgets have seen an increase in recent years, which has allowed him to spend money in such areas as labour, increased greens rolling and wetting agent usage.

“We certainly don’t see anywhere near as much disease issues with greens anymore.”

The reductions in Thornhill’s pesticide use has also resulted in a public relations boon for the golf club. Its environmentally friendlier approach has coincided with a decision the club made about a decade ago to become more family oriented, which has served the club well.

Thornhill Country Club was designed by Stanley Thompson and has, in more recent years, been tweaked by architect Doug Carrick. It served as the site of the 1945 Canadian Open which was won by Byron Nelson – his record-setting 11th consecutive victory on the PGA Tour. The club produces its own maple syrup from its on-site sugar maple trees as well as 300 to 400 pounds of honey from six hives on the property.