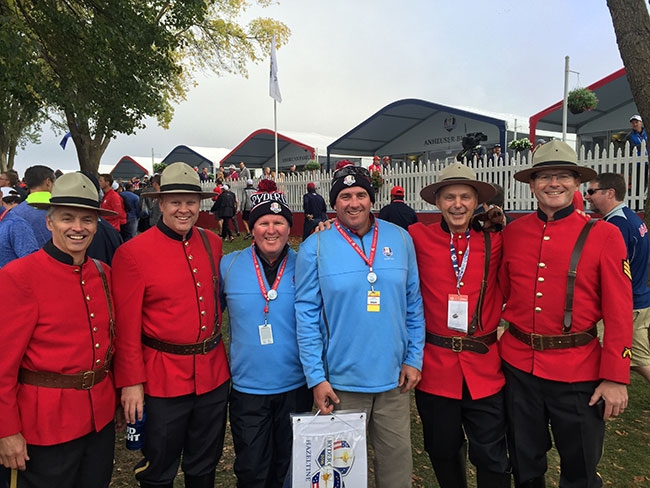 Paul MacCormack and Mark Perry enjoy a visit by “Mounties” at the Hazeltine National Golf Club.

Volunteering their services at Minnesota’s Hazeltine National Golf Club for the fall Ryder Cup competition proved to be an eye-opening experience for a couple of Prince Edward Island golf superintendents.

“It’s one of those things that broadens your horizons so much,” said Paul MacCormack, superintendent at Fox Meadow Golf Course in Stratford, who was among about 100 volunteers to assist the Hazeltine turf maintenance staff for the week of competition between the best professional golfers from the United States and Europe.

Joining MacCormack for the week was Mark Perry, superintendent at Rustico Resort in Cymbria.

“It was an eye-opening experience, as one can imagine,” Perry said.

While at Hazeltine under the supervision of host superintendent Chris Tritabaugh, MacCormack was assigned to “Stimp Team A” which measured greens speeds daily on four designated holes. Perry, meanwhile, was part of a bunker maintenance crew who looked after both fairway and greenside bunkers on five separate holes.

It’s common practice for superintendents from other golf clubs to volunteer their services to assist the host superintendent of a major golf tournament to maintain the course during the week of competition. For MacCormack and Perry, however, it was their first such experience.

“It was definitely something I wanted to do for a long time,” said MacCormack, who had fostered a friendship with Tritabaugh a number of years ago. Tritabaugh had previously been superintendent at Northlands Golf Club in Duluth, Minn. and was an advocate of bentgrass over poa annua. Since MacCormack shared the same philosophy, they kept in touch with one another about their successes with bentgrass.

About five years ago, MacCormack invited Tritabaugh to speak at the annual Atlantic Golf Superintendents Association conference in Halifax, which marked the Minnesota superintendent’s debut as a public speaker.

MacCormack said that when Tritabaugh moved to Hazeltine, it was just a matter of time that he would be host superintendent for the Ryder Cup. When Hazeltine was awarded the event for 2016, Tritabaugh emailed MacCormack with an invitation to volunteer.

“I didn’t hesitate at all to do it. And then I boldly asked if I could bring a friend.”

Both MacCormack and Perry spent eight days in Minnesota for the event, helping to groom the golf course in advance of the match play series and then conditioning it daily following each day’s matches.

With about 100 volunteers to complement Hazeltine’s own maintenance staff of about 50, each day’s job requirements were completed in less than 2½ hours.

“So much of their maintenance was done beforehand,” MacCormack said. “So much of what that week culminated into was five years of preparation. It was interesting to look at it that way.”

The stimp crew was divided into four separate teams that were assigned four or five holes apiece. MacCormack’s team looked after two holes on the front nine and another two on the back.

“We were measuring greens speeds each day, twice a day,” he said.

Perry was part of a team of five, led by a Hazeltine intern. His bunker crew was responsible for blowing debris from the sand hazards on the third, fourth, fifth, 14th and 15th holes. Both fairway and greenside bunkers were maintained.

The crew would work from tee to green to rid the bunkers of any foreign debris before the team leader raked the bottom of each bunker. For greenside bunkers, sand sprayed onto the putting surfaces from bunker shots was blown back into the cavities. Two of Perry’s assigned holes were par threes and therefore had no fairway bunkers.

“There were a bunch of them,” he said of the bunkers on his checklist.

The bunkers at Hazeltine were maintained in the Royal Melbourne fashion. Their faces were “packed” solid, tight and smooth, allowing the ball to roll toward the bottom of each bunker.

“It was very interesting to see how it was done,” Perry said, adding the bunker faces were prepared more than a month in advance of the Ryder Cup. The faces were machine-packed and rolled repeatedly to achieve the desired effect.

“They were tremendously done,” he said. “It made the whole golf course. The whole place just jumped out at you when you saw it.”

Perry was teamed with a local Minnesotan and a couple of Swedes.

The workday began for both Perry and MacCormack each morning at 5 o’clock. By 7:30, they had completed their pre-match preparations.

MacCormack said the work done at Hazeltine wasn’t all that different from what he is accustomed to at his home course. The distinction, however, was the vast labour pool Hazeltine had for the tournament.

“It’s pretty easy when you have 50 people to go mow everything,” he said. “We would essentially have the golf course set up in two hours. The whole thing was mowed stem to stern and ready to go each day.”

MacCormack said there were some interesting things done at Hazeltine, but added the sheer scale of the numbers would preclude him from duplicating it back home.

“For me, the big thing was to see how pure their stand of bentgrass was, and to get to talk with Chris and his assistants and really mine for the data of how they go about presenting those surfaces,” he said. “Chris is kind of famous for presenting immaculate bentgrass, but not spending a tremendous amount of money in fertilizer and different things like that.”

“To be able to see the evolution of his maintenance with regards to bentgrass specifically was very interesting, I found.”

As awed as he was with Hazeltine’s bentgrass conditioning, MacCormack said what really impressed him during his week at the golf course was Tritabaugh’s demeanor while tasked with such an imposing operation that might have been overwhelming for some people.

Paul MacCormack and Mark Perry enjoy a visit by “Mounties” at the Hazeltine National Golf Club.

“I think the biggest thing we took away from being there with Chris and his staff was simply how easygoing everything was, and how calm they were and how focused they were, and how humble and thankful they were. That really was more important than anything you could take away turf-wise. They were simply so enjoyable to be around and had so much fun doing what they were doing. It was really infectious.”

MacCormack said each of the volunteers felt he was part of the overall team. He added one of the things Tritabaugh did during the pre-tournament orientation meeting was to individually introduce each one of the volunteers, a process that took about half an hour to complete. Each volunteer was recognized with a personal anecdote.

“That was really nice. That really showed how much they cared about us.”

Just as much emphasis was placed on the volunteer experience as was directed to the golf course upkeep, he said.

“There weren’t too many details they didn’t neglect.”

The networking opportunities proved to be another benefit from the Ryder Cup experience. MacCormack and Perry spent some casual off time with members of a Swedish contingent of volunteers, discussing golf course management matters of mutual interest. The Swedish volunteers were from a region whose latitude was virtually identical to that of Prince Edward Island’s.

“Things like that are hard to put a price on,” MacCormack said. “I would probably go again in a heartbeat if my wife lets me.”

The experience at Hazeltine wasn’t all work and no play for MacCormack and Perry. Both got to watch some of the golf action unfold. Because they were working inside the ropes, they were in close proximity to U.S. Ryder Cup captain Davis Love, vice-captain Tiger Woods and European vice-captain Ian Poulter.

He added the functionality and flow of the Ryder Cup experience were among his personal highlights, and said it was “enlightening” to see how Tritabaugh and his team accomplished their objective.