Skin cancer is the most common form of cancer in Canada, and it is on the rise, an official with the Canadian Cancer Society confirmed in March while speaking at the fifth annual Nutrite Information Day in Guelph.

Addressing an audience of mainly lawn care practitioners, Lorraine Skarratt, manager of the society’s Wellington County office, said although skin cancer is increasing, there are several ways to minimize the risk. 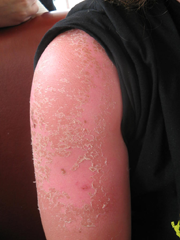 It is impossible for those employed in the turf maintenance industry to entirely steer clear of the sun’s ultra-violet radiation during a typical working season. But the means in which they dress, their access to sunscreen and their ability to seek shade when possible gives them a chance to significantly reduce the risk of skin cancer.

“The good news is that skin cancer is, for the most part, preventable,” Skarratt said. “There are lots of things we can do to reduce our risk.”

Melanoma is less common and tends not to reappear because it has gone so deep into a person’s DNA that it’s not always treatable, “and that’s where we see fatality from skin cancer,” Skarratt said.

The actual cause of skin cancer is ultra-violet radiation which is an invisible energy source which comes not only from the sun but also from indoor tanning equipment. Ultra-violet radiation which comes naturally from the sun is the major cause of skin cancer and causes sunburn, suntan and premature aging of the skin. It can also lead to cataracts.

There are two different types of ultra-violet radiation:â€ˆUVA and UVB. UVA is the most common of the two and penetrates deep into the skin, causing the damage associated with wrinkles, aging of the skin and tanning. UVB is 100 times more apt to cause sunburn than UVA.

Skarratt said that although sunburns eventually go away and tans fade, the damage is deep into DNA cells and is cumulative, meaning that the more one tans the greater the risk.

The sun’s rays penetrate through clouds, fog and mist while surfaces such as water, sand, snow and concrete reflect the sun and increase the intensity of its rays.

“It’s really important that we take steps and plan so that we don’t get burned or get very bad tans.”

She said 46 per cent of males whose jobs require working outdoors spend at least four hours daily in the sun. The first step toward prevention is to limit the amount of sun exposure, especially during the period between 11 a.m. and 4 p.m. and when the UV index is 3 or more.

“If your shadow is shorter than you are, then you should be in the shade.”

If the job dictates that it is next to impossible to work in the shade, shade can be manufactured, if possible, by an umbrella.
Skarratt suggested outdoor workers be rotated so that the same individual isn’t constantly exposed to the sun.
The “slip, slap, slop” method of solar radiation prevention has its merits, she said.

Outdoor workers should “slip” on clothing and resist the urge to remove their shirts while working, no matter how hot it gets.

“It’s really important to protect your skin, so try to wear some loose-fitting clothing like cotton which will keep you somewhat protected from the sun.”

Outdoor workers are also urged to “slap” on a hat and preferably one with a wide brim which offers better protection than a ball cap. A wide brim will cover most of the face and will also offer protection to the ears and the back of the neck.

Finally, outdoor workers need to “slop” on a sunscreen product. Skarratt said sunscreen should not be the only deterrent against skin cancer, but should complement other protective measures.

An SPF of at least 15 should be used, but 30 or more is recommended for those who work regularly outdoors. The product should be applied about 20 minutes prior to going out into the sun. She said it is important to read the label to see how often sunscreen should be reapplied. Those who tend to sweat while outdoors will find sunscreen will evaporate that much quicker or will wash away faster.

Skarratt said people often tend to forget to forget to apply sunscreen to their nose, ears, the back of their neck and the tops of their feet.

Skarratt said if anything that looks suspicious is detected anywhere on the skin, to consult a doctor. Signs of possible skin cancer should be checked for on a regular basis. Any changes to the skin should raise a flag because skin cancer is highly treatable for the most part.

Visible signs include birthmarks or moles which have changed in colour, size or texture, or sores that aren’t properly healing.

“If you have any growth patches on the skin that have become crusted or scaly, they’re worth investigating.”
For areas of the body that are more difficult to see, such as the back, the back of the neck and back of the legs, someone else can get a better look.

The sun’s rays are a primary source of Vitamin D, which is good for one’s health and helps to reduce the risk of some forms of cancer, but there is a fine line which separates the risk of skin cancer and the healthy benefits derived from the sun.

“You don’t have to get a tan to get enough exposure to Vitamin D,” Skarratt said. “Incidental exposure to the sun is sufficient.”

Skarratt said cancer touches everyone, either directly or indirectly.

“It’s a terrible disease that has no boundaries. It doesn’t care whether you’re male, female, young, old, what your religious beliefs are or what your lifestyle is.”

Every three minutes, another Canadian faces a cancer diagnosis, she said.

“That’s a terrifying statistic and a great concern for us. The good news is that many cancers are highly preventable. Many are highly treatable and highly curable.”

Today, 62 per cent of people diagnosed with cancer will survive the disease.

“We do all we can to research how we can outsmart cancer with treatment options.”

The human body is made up of millions of cells whose genes grow, work, reproduce and die off normally. When things go awry, however, and cells don’t function in the normal manner and multiply out of control and in an abnormal way, lumps and tumors are formed.

tumors can be either benign or malignant. A malignant tumor is a cancerous cell that is out of control.

“Cancer cells can spread very rapidly. One of the defining features of being cancerous is that they multiply exponentially—faster than a normal cell would do—and that’s why cancer spreads very quickly.”

When cancer spreads to other parts of the body, it’s said to have metastasized.

Some people are able to respond better to treatment than others.

“Overall, we can say the fundamental problem is this underlying mechanism is broken down in the cell which causes it to grow abnormally at an exponential rate.”

Several risk factors exist in which the things we do increase the chance of getting the disease.

“Does it mean that if you avoid all the risk factors that you can guarantee you won’t get cancer? No, absolutely not.”

Instead, the more one reduces the risk factors, the better his chances are of not contracting cancer. Skarratt said that although medical science is aware of the risk factors associated with skin cancer, it is unsure why one person may get it while another won’t even if both individuals subject themselves to the same degree of sun exposure.

Outside of the government, the Canadian Cancer Society is the largest funder of cancer research in Canada.