The event, played at the Thornhill Golf & Country Club, raised $ 40,000 for turfgrass research. Particular support came from the Ontario Golf Superintendents Association with a contribution of $ 20,000 and from the Golf Association of Ontario with $ 15,000. 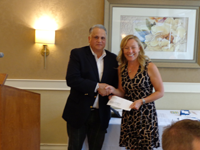 The OTRF is investing this year in studies of biological controls for dandelions and dollar spot using beneficial microbes isolated from corn.

Both studies, spearheaded by Dr. Manish Raizada of the University of Guelph, are in their second year. The overall objective of the dandelion study is to produce an effective safe biocontrol spray formulation to suppress the weed for sod producers, turfgrass managers and grass owners of Ontario.

According to the OTRF project literature, it is “to be achieved through isolation of preferred endophytes, and then lab and field trials using the preferred endophytes on growing dandelion-infested grass stands. Experiments will be conducted to measure endophyte persistence over time and under adverse environmental conditions (using microbial DNA fingerprinting technologies) to inform end users when to spray for effective dandelion control.

“With the discovery of one beneficial endophyte derived from corn that suppresses dandelion seed but not turfgrass species, additional endophytes need to be tested for efficacy on dandelion weed suppression. With isolation of the preferred endophyte or endophyte cocktail, field trials of the foliar spray will provide documented evidence of the efficacy of the technology and if/when re-spraying an infected area is needed.

“This method of weed suppression will be of immediate value to the maintenance of residential lawns, sports fields, golf greens, as well as in commercial sod production.”

Dr. Raizada’s team has discovered three beneficial bacteria (endophytes) which suppress dollar spot disease on creeping bentgrass. Two have been tested with positive results as a foliar spray on field cupcuts transplanted into the greenhouse.
OTRF literature states “the overall objective is to produce an effective robust biocontrol spray formulation to suppress dollar spot on grass, therefore reducing the dependency of non-environmental-friendly inputs such as chemical fungicides. Specifically, the project will test how beneficial microbes that naturally live inside grasses (including corn and finger millet) can suppress dollar spot disease when sprayed onto turf.”

Three other studies are being conducted with OTRF support, including a first-year evaluation at Alberta’s Olds College of compost topdressing applications and compost tea applications on sports field turfgrass species, a second-year study by Dr. Tom Hsiang of the University of Guelph on turf diseases and stress resistance activators, and a second-year study by Dr. Michael Brownbridge of the Vineland Research & Innovation Centre on a guideline for sustainable turfgrass using low-input cultivars and low-risk management practices.

At the post-golf banquet. OTRF research chairperson Dr. Brenda Nailor presented a slide show to depict how funds raised for turfgrass research sustain the game of golf. Using graphic photos, she showed that without ongoing research, golf courses, home lawns and sports fields would not be able to sustain the surface conditions that are currently taken for granted.

The OTRF acknowledged the passing in August of John Wright, a past director with the OTRF board and a founding member of Landscape Ontario.

The golf tournament attracted participants from as far as Alberta, Manitoba and Philadelphia.

• A hole in one by John Gallinger of the Meadowbrook Golf &â€ˆCountry Club, who won Zander Sod’s closest-to-the-pin contest. He was also the longest drive winner on a hole sponsored by Greenhorizons.