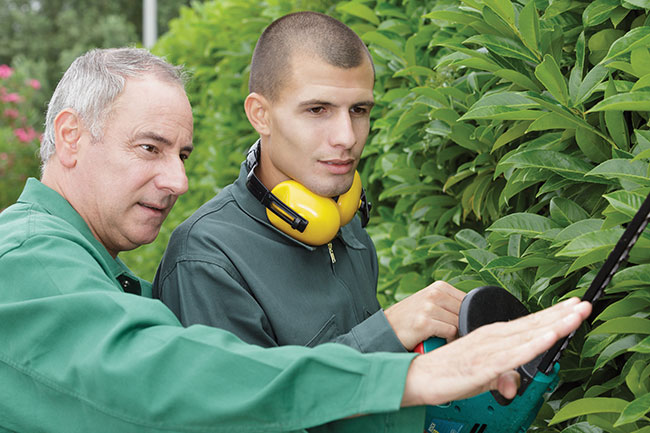 Employees stuck in a low-level position with few chances to climb the ladder aren’t likely to remain long with a company. Photo credit: Auremar/Adobe Stock

Employee turnover in a seasonal profession tends to be a common occurrence. When that profession is highly competitive, finding the right people to hire and then retain them for the long term is especially challenging.

Speaking in February at the virtually delivered Ontario Turfgrass Symposium, he said there is considerable cost associated with finding the right people, while retaining them has a further impact upon those expenses.

Employee retention is the key, Lemcke said, adding discrepancies about wages, company culture and a work-life balance tend to be secondary reasons for people leaving their jobs.

“It’s really a lack of growth opportunities,” he said, noting that if employees aren’t happy where they are, they will go elsewhere. If a company isn’t growing and if it’s not creating opportunities for its employees to advance within, the likelihood of retaining people is small, he added.

Employees don’t want to be stuck in a low-level position with no opportunity to climb the ladder.

“That can stymie or create issues for people because most individuals want to move up in the ranks of an organization.”

Key people companies wish to retain for the long term must be presented with a chance to grow along with the business. The strategy at Weed Man, Lemcke said, is to show new employees that they can potentially become managers or run franchises, even if they were hired as an entry level technician or salesperson. The company is willing to help aspiring employees write their licences to become certified technicians.

“We have a management program where, if people show interest, we put them in the program and start to build those skills on how to manage operations.”

He said there have been numerous instances at Weed Man in which an employee has started at the bottom – whether in sales or as a technician – and has attained the position of sales manager or technical manager.

Weed Man ties people to their performance, allowing them to earn more if they succeed in what they’re doing, Lemcke said.

Motivated employees
Employees who are motivated will perform better and succeed within the company while those who aren’t are simply there for the hourly wage and won’t work any harder than necessary, he added.

“We’re looking for people motivated by the possibility of increased income.”

Weed Man endeavors to coach people so that they can be the best employees possible, but Lemcke said the company sometimes encounters those who aren’t the right fit for the position, and the business doesn’t wish to invest a lot of time into people unwilling to give their best.

“A lot of people try to work with their employees, but there’s that one person who seems to bring everyone down, and it’s a nightmare to have to hire again and train someone.”

Allowing such a person to remain with the company can be a culture killer, he said, adding it can negatively affect employee morale.

Knowing when to terminate an employee and recruit others is critical to a company’s culture. Lemcke said the larger a company grows, the more challenging it becomes to create a positive culture.

Smaller companies for which the owner is more involved in everyday matters tend to develop a culture much easier and quicker.

Workplace culture can be fostered through such things as team building and social events, regular performance meetings, bonuses, employee recognition, diversity and treating people with respect.

Many employees are concerned by work scheduling. Since the lawn care season is so short and there is little time to get everything done, scheduling is a factor in retention.

“I think last year was probably the most difficult I’ve seen for a lot of our franchises to get work done because of the difficulty in keeping good people.”

Since the start of the COVID-19 pandemic, some workplaces have explored the idea of implementing four-day work weeks with longer hours stretched out over four days. In the lawn care profession, however, such a scheduling strategy can be nearly impossible to pull off because the business is dependent upon Mother Nature’s cooperation. If a significant rain event wipes out a day during the week, it might mean having to get work completed on Saturdays.

“Getting people to work six days is becoming more and more difficult. They want their weekends off.”

A reality of today, he said, is that many people change jobs every couple of years, unlike previous eras when most employees remained with their employer their entire working life.

“If you have job security where people can work year-round, especially in a seasonal business, and you can find ways to do that, it does help to keep people longer.”

Weed Man endeavors to keep key people working throughout the year, having them work on equipment, doing marketing business or helping with such add-on businesses as Christmas Décor.

Lemcke said Weed Man likes to keep things simple when it comes to the company’s vision and mission, wishing to amaze both customers and employees. Its core values include honesty and the development of people along with a business plan.

“If you don’t have a business plan, then you have no plan. You’re basically flying by the seat of your pants. You don’t have a plan to develop people.”

At Weed Man, 10-year business plans are developed for several franchisees so that as they grow, they’ll know what positions need filling.

Recruiting and training always has room for improvement, he said.

“It’s not 100 per cent perfect, but we do our best to try and do it right the first time.”

Their work is monitored and if gaps in training are found, the company follows up on it.

“The biggest part where most people fail is they don’t follow up and check. They let things go because they’re too busy doing other things or they don’t have the time to verify or they’re not putting systems in place to actually have the ability to do this.”

He said when technology is used in recruitment, it simplifies finding the right people for the job. For example, using the word “technician” in an advertisement tends to draw candidates of a higher level than if the term “general labourer” is used.

Lemcke said if a company lacks a solid procedure to get people in the door, it will lose those people to a competing business.

A company claiming it can’t find the right people or has difficulty hiring has poor processes in place, he said. This includes not getting back to candidates immediately to schedule an interview. If potential recruits aren’t interviewed immediately, they’re likely to be “scooped up” by a competitor.

Competitive rates must be offered, he said, adding Weed Man has had to increase its rates in the Toronto area the past few years to stay competitive. Increases must be passed along to the consumer, or a company will no longer be competitive, and employees will constantly be replaced.

“You can’t be afraid to increase prices because inflation is going up. You’re going to have to be competitive to get people to work.”

Businesses wanting to attract the right people must make the job sound interesting in advertisements and on company websites, Lemcke said, adding employers must know their demographic and ensure the job and benefits fit the lifestyle of prospective employees.