THEâ€ˆ12-hole golf course has demonstrated it has a place in Canada as golfers have embraced this hybrid of nine and 18-hole-length layouts.

In our April/May issue, we reported on the 12-hole Greenbryre Golf & Country Club in Saskatoon which had been redesigned from an original 18-hole layout. This year marked its first full season after its contraction to 12 holes, and area golfers have come to espouse the change in scenery and the fact they can play the game in a reasonable amount of time. 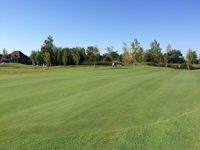 Greenbryre, however, is not the only 12-hole golf course in Canada. Also offering the shorter golf fix is le Parcours du Cerf in Longueuil, located just outside of Montreal.

It, too, enjoyed its first full season in 2015 and sprang from an original 18-hole layout. Le Parcours du Cerf is now a 39-hole facility.

Unlike Greenbryre, which converted an 18-hole property into one of 12, le Parcours du Cerf took nine holes from its newer 18-hole course and reconfigured it into a 12-hole layout. Eight of the original nine holes remain intact. The area which accommodated the par 5 first hole was redesigned to make room for two new holes—a par 4 and a par 3. Additionally, two new par 3 holes were constructed on land available at the original nine-hole site.

“We were able to do that without touching the other holes,” said general manager Bernard Vaillancourt, adding the existing property wasn’t overly spacious, but provided the necessary real estate required to accommodate 12 holes.

The new course now provides golfers with two par 5s, four par 4s and six par 3s to play. The par 3 holes range in length from 100 to 200 yards with the two newly-constructed holes reaching 140 and 110 yards.

The construction of three new greens was required to complete the project. Each was built to USGA specifications to remain consistent with the existing nine greens.

“That was fun for us to be able to work on brand new greens,” assistant superintendent Andrew Marr said. “It actually blended in pretty well with the rest of the course. Everyone was really happy, either working on it or playing on it.”

Shortly after Labour Day in 2013, the nine holes earmarked for the new 12-hole course were closed, and work began constructing and sodding the three new greens to bentgrass. New tees and bunkers were also built with the necessary work to convert the property into 12 holes taking about 10 weeks to complete.

Vaillancourt said architect Yannick Pilon was called in to design the two new holes as well as the breakdown of the original first hole into two distinct holes. Pilon, who had previously worked for Graham Cooke & Associates, was the architect for the original nine-hole layout.

“We have the best of both worlds,” he said.

When an 18-hole tournament is booked, the three newest holes on the 12-hole site will close and the remaining nine holes will be combined with the club’s original nine-hole twin. Other golfers can play a full 18 holes on le Parcours du Cerf’s original 18 holes.

The 12-hole course takes an average of 21/2 hours to play. Golfers who tee off as late as 4 o’clock in the afternoon can complete their round in time to eat dinner at a reasonable hour.

Marr said the addition of three new greens and tees means there is more surface area to mow.

“Obviously, it takes a little bit more time to cut the 21 (the 12 holes and other nine on one side of a dividing street). We have to change the cups every day, so that’s a little bit longer. We have to get used to that. The first couple of weeks was a little bit tight with golfers starting at the same time as usual, but we still had to clear out of the field.

“That was a challenge, but in a couple of weeks we were back into the groove and were able to set up the 21 holes in no time, so we never disrupted the actual play.”

Aside from that challenge, the additional holes meant somewhat greater fertilizer requirements, but Marr said that was alleviated by the size of the new greens.

Managing the newly-sodded greens in late 2013 went smoothly, he said, and they were ready to go by the following May.

“We were very lucky with the winter and the fall when we were actually doing all the work. Mother Nature was on our side.”

“We didn’t have to rip anything out or change things around,” Marr said. “It was already there. They’re all close to fairways or tee boxes, so we were able to bring the water from there into the greens or tee boxes that were built.”

He said several golfers were skeptical in the beginning about the proposal to take nine holes and turn the site into a 12-hole layout, but the idea has since caught on.

Marr admitted that even he, as a “traditionalist,” had become accustomed to playing 18 holes each time he played, but finds playing 12 holes to be “loads of fun.”

“The more you play it, the more you appreciate the golf course,” Vaillancourt added.

Marr said he believes a significant selling point for the 12-hole course is that, although there are several par 3 holes of varying lengths, two long par 5 holes pushing 500 yards allows golfers to “let loose” and hit the ball, providing a feeling that they are playing a regular-length golf course.

Golfers have praised the quality of the course, Vaillancourt said.

“They think at the beginning that a 12-hole golf course will be a Mickey Mouse golf course. That’s not the case at all. It’s a very good surprise for them.”

He said he has been fielding questions about the 12-hole concept from other golf courses, adding he figures some of them may wish to go down the same path.