TIM Hortons Field, the new home of the Canadian Football League’s Hamilton Tiger-Cats, will get its real christening in July when it becomes the venue for 32 soccer games to be played at the 2015 Pam-Am Games.

The $ 145-million stadium is classified as a multi-sport facility, even though the Ticats will be its primary tenant. 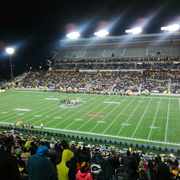 Coralee Secore, in charge of Hamilton’s Pam-Am Games planning, and Rob Gatto, manager of stadium and golf operations for the City of Hamilton, spoke about the new stadium and its coming role at the Pan-Am Games at February’s Ontario Turfgrass Symposium at the University of Guelph.

The Ticats’ previous home—Ivor Wynne Stadium—had reached the end of its life expectancy at the end of the 2012 football season. It required several costly upgrades to bring it up to code, but a $ 45-million commitment from the City of Hamilton to construct a new stadium shelved any notions of keeping Ivor Wynne in use.

The Hamilton franchise played its “home” games in 2013 at the University of Guelph while Tim Hortons Field was under construction. It officially opened Sept. 1, 2014, and the Tiger-Cats have since been undefeated while playing in their new home.

Tim Hortons Field is situated on the same site as the former Ivor Wynne Stadium which was demolished to accommodate the new stadium. Whereas Ivor Wynne was oriented in an east-west fashion, Tim Hortons was built north-south which has eliminated issues of athletes having to cope with harsh sunlight in their field of vision.

Although the stadium has already marked its official opening, it hasn’t yet achieved “substantial” completion, Gatto said, noting a series of past delays has prolonged that anticipated date.

He said one of the key components left in its completion is networking which includes the bringing online of IT services.

“We’re getting close now,” he said, adding he expects substantial completion will be realized by April 1.

Because of the field’s multi-sport designation, it was important the field cover could accommodate both football and soccer as well as other sporting events. An artificial turf system was selected to meet the technical requirements for both the CFL and FIFA (Fédération Internationale de Football Association).

The city opted for the installation of FieldTurf and its Revolution fibres. Gatto said the company is regarded as a world leader for its turf systems and has completed more than 5,000 installations throughout North America.

Seven of nine CFL teams have the FieldTurf systems installed, and four of six stadiums to be used for the 2015 FIFA World Cup championship in Canada have the turf type.

Its specially-sized cryogenic rubber particles and washed silica sand are layered in a patented installation process, surrounding the fibres to provide enhanced safety and performance.

FieldTurf’s SureLock coating system leaves the backing 40 per cent porous for maximum drainage and contributes to a high-performing tuft bind.

Gatto said the field is heavy-weight infilled with maximum drainage. Hutcheson sand has been incorporated into the system. A number of years ago, sand was never part of an artificial turf system, “so it’s come a long way.”

Ongoing maintenance will include brushing, sweeping and aerating, and low spots in areas of excessive play and wear will require filling.
The field currently has a FIFA two-star rating. In order to maintain the rating, Gatto said the field cannot afford to let any “shadowing” set in where lines have been painted and then erased for other sports. At Ivor Wynne Stadium, lines were sewn into the artificial surface, but yardage and boundary lines used for football will be painted on at Tim Hortons Field so that they can be erased when the field is used for other sports.
Gatto said he estimates the cost of maintaining the field to FIFA two-star rating specifications will be between $ 200,000 and $ 300,000 annually.

When snow removal is required, plow blade edges will be covered by PVC pipe to prevent any tearing of the turf fibres.

Gatto said the turf’s life expectancy is about 10 years.

Secore said the July 10-26 Games and the subsequent Parapan American Games in August represent the largest multi-sports event ever to be held in Canada.

“This is a once-in-a-lifetime opportunity.”

A total of 41 countries from the Americas will compete in a total of 36 sports and 51 disciplines of which eight are specific to the Pan-Am Games. The remainder are Olympic sports. In all 364 medal events will be contested.

The Games will attract about 10,000 athletes and officials.

“This is quite a big undertaking and shows the magnitude of what we’re expecting in July and August,” she said.

The games will be contested in 18 different municipalities situated in the Golden Horseshoe area, although Toronto stands as the official host.
The Canadian games mark the highest level of participation in the history of the Pam-Am Games.

With only a year remaining before the 2016 Summer Olympics in Rio de Janeiro, the Pan-Am Games will serve as a qualifier and thus will attract the best athletes from the participating countries.

Secore said the budget for the games this summer is $ 1.4 billion, and 1.5 million tickets are expected to be sold for the various events. She said an emphasis was placed on making the games both accessible and affordable. No tickets are in excess of $ 45, and a family of four can attend a soccer game at Tim Hortons Field for $ 60.

All venues, facilities and transportation are accessible.

“The games are more than just sport, but are also about arts and culture,” she said, noting there will be 16 days of cultural activities throughout the span of the games. Festivities include music, art, theatre, exhibits, aboriginal events and children’s activities, most of which will be free of charge.

It is expected the games will trigger increased participation among younger Canadians in the sports represented.

Tim Hortons Field, at which 32 soccer games will be played, has a seating capacity of 22,500 and represents about one-third of all tickets sold for the entire games.

“We can now make it a multi-purpose stadium whereas before it was strictly just a football stadium,” Secore said, referencing the former Ivor Wynne Stadium’s role.

The city has also allocated 1,100 hours per year of community use at Tim Hortons Field, allowing such events as high school football games to be played there.

Although the stadium is that part of Hamilton’s centre piece, the immediate vicinity will also see the construction of a new high school, a new seniors’ community centre and a new sports park in the period following the Pan-Am Games. A $ 64.8-million investment has been made for the additional facilities.