When the Toronto Golf Club decided in 2009 to return its Colt course to a more naturalized look, it did so in a manner that was aesthetically pleasing, was easier to maintain and would be more golfer-friendly.

Superintendent Al Schwemler spoke in detail about the club’s naturalization project at a forum in November organized by University of Guelph turfgrass management students at Guelph’s Cutten Fields. 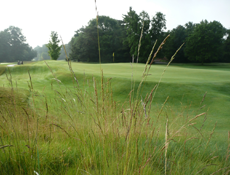 The 18-hole Colt course, designed by architect Harry Shapland Colt, had evolved into more of a parkland layout since its opening in 1912. The Toronto Golf Club developed a master plan seven years ago to return the golf course into more of a natural landscape while maintaining, implementing and expanding on some of the Colt features that had been lost over the years.

The course, which was originally heathland in nature, was to achieve its new naturalized look through the regrassing of its secondary roughs to fescue and abutting it with accent fescues.

Schwemler said the introduction of accent fescue helped to frame holes and add colour to the golf course. When first proposed, members feared the accent fescues would be nothing more than thick growth which would swallow up golf balls and contribute to broken wrists.

Some existing naturalized areas on the golf course were in fact extremely thick which contributed to slow play and would hurt golfers’ hands when they tried to slash through it.

When establishing the accent fescue and secondary roughs, members were promised a ground cover that would be thin and wispy. The secondary cut was not to be a thick bluegrass, but have a thinner blade which would make it easier through which to swing a golf club. The way the grass laid down would also contribute to its playability.

“We were looking at different methods of how we were going to actually regrass our roughs,” Schwemler said.

Test plots were adopted to see which method would work best. The trials included the use of fumigants, Roundup and different seeding methods.

The golf club worked on the project with architect Martin Hawtree who recommended different fescue cultivars. About 40 per cent of the fescue was hard fescue, with about 25 per cent each of blue and chewings fescue and about 15 per cent sheep fescue.

“We actually did have quite a few native blue fescues on the golf course.”

Schwemler said that much of the Roundup used tended to shed right off the turf and wasn’t able to kill some of the existing fescue.

He said the seeding rate used was the key to the project’s success. For the secondary rough, the rate was 160 pounds per acre while half that amount was used for the accent fescue.

“Our thought was to start thin. It’s easier to thicken it up sometimes than it is to thin it out.”

A pre-plant fertilizer formulation of 7-12-12 was drawn up by agronomist David Smith of DCS & Associates.

Slit seeding was the first method Schwemler decided to try. A good catch was realized at the outset, but wet and cooler weather led to a takeover of poa annua. Eventually, the strategy was to revert back to a utilitarian method by drop seeding, topdressing and watering.

Crop spreaders were used for the most part with rotary spreaders utilized on some slopes. In worst-case scenarios, hand seeding was done. For excessively steep slopes, the area was hydromulched atop the seed followed by irrigation.
The objective was to achieve a thin and wispy fescue covering in which a golf ball could be seen from 50 to 70 feet away.

“We did not want a thick and gnarly type.”

Schwemler said the keys to success in introducing accent fescues and going with fescue in the secondary roughs included working with a good budget, having sandy soils with excellent drainage, and using low seeding rates. The approach required management, maintenance and special equipment, and it was understood that accent fescue couldn’t be grown on terrain which couldn’t handle the equipment. Anything that was considered “beyond steep” wasn’t earmarked for accent fescues. The goal wasn’t as much about growing grass as it was about maintaining a thin, wispy swirl of turf.

During the project, Schwemler and his team contended with 21 days of storm events which resulted in washouts.
He said that to achieve a thin, wispy accent fescue area, it can’t simply be seeded, let go and mowed only a couple of times a year.

“There’s actually a fair bit of maintenance and management to it.”

A multitude of different mowers were used to maintain the accent fescues, from Bush Hogs to flail mowers to a Ventrac for steep hills to outfront rotary mowers to standard rough mowers to side winders to line trimmers.
Once seed heads begin to fall down or lay over in October, it was time to mow. If a little growth was realized again, a spring cutting would follow.

During one season, the club fell behind in its maintenance schedule, having wanted to cut the growth in spring. Seed heads had just started to pop, the fescue was cut and then the heads seemed to return and regrow. The plants were putting their energy into seed production, and the maintenance crew responded by “castrating” it.

“It wanted to reproduce, but did it to a thinner degree.”

Each time the accent fescue was cut, scarifying and clipping removal followed. Plans weren’t to return any nutrients back. Scarifying was done in a number of different ways in which the surface was scraped, clippings were collected and chain harrows ran through the accent fescue area—“anything to beat it up and keep it thin and wispy.”

A fairway vertical mower was also used to run through the accent fescue, throwing material out 40 to 45 feet high.
“It is pretty labour-intensive,” Schwemler said of having to collect the clippings and seed heads, adding it was important to designate an area to compost the collected material.

Among the area’s inputs was a pre-emergent herbicide for crabgrass control. On sandy soils and during a drought year, there is always the concern for crabgrass, he said. The spraying application is timed in conjunction with the spring cut, just as seed heads are ready to pop. Additionally, backpack sprayers with a hose and gun have been used.
Schwemler said he is looking at possibly applying low rates of Roundup again.

“We’re still in the experimental stage.”

Having accent fescue doesn’t make for a truly naturalized area, Schwemler said, but added the club’s cut rough area has been reduced by about 30 acres which are no longer irrigated.

“We based our irrigation design on where the grass lines are going to be and not vice-versa. We want to make sure we have a six-to-10-yard buffer which would not get irrigated.”

In addition to receiving no irrigation, the accent fescue areas are also not fertilized with the exception of their first fall when the conversion was made.

The areas of the golf course provide habitat for a variety of wildlife and provide corridors for their freedom of movement.

“I can take fewer heads and turn them on for quite a bit longer and still pump out the same amount of water as turning on double heads half the time.”

Along the perimeters, there are now heads watering into the fairways and into roughs, wherever coverage was a little thin in the centre.

“We don’t need to be green wall to wall.”

Schwemler said golf courses in Great Britain understand that brown can be just as good. At the Colt course, green exists in the playing area and moves to a green-brown to a brown-green as the perimeters extend to the accent fescues.

“You didn’t want to have a monotone colour and then straight into the accent fescues.”

The look can change in appearance from one year to the next, depending on rainfall amounts and drought levels.
Another improvement made at the Toronto Golf Club was the acquisition of an alternative water source. Several golf courses in the greater Toronto area have high-salinity water, and the Toronto Golf Club, which is actually located in Mississauga, had high salt content prior to 2004. Tapping into Lake Ontario for its water source has greatly improved the quality of the club’s water as well as its water management. Once the changeover to Lake Ontario water occurred, trees on the property hit by spray were no longer defoliated.

Water travels from the lake about 11/2 kilometres to a reservoir on the golf course. Colt didn’t include much in the way of water features when he designed the course, and the club didn’t want to produce another water hazard. Only a few small creeks flow through the property.

Schwemler said the high end water usage came after the ice damage from a couple of years ago when irrigation was needed more.

“Going to the secondary fescue roughs, which are a bit more drought tolerant, they look great brown, and our membership has started to accept that brown look.”

It has also made the golf course firmer and faster.

A typical cycle during a dry period for the full 27-hole property is between 150,000 gallons and 250,000 gallons. The usage will be monitored to see how amounts may change in the wake of alterations made to the nine-hole Watson course and the construction of a new practice facility. Bluegrass at the Watson course differentiates it from the Colt course.

Schwemler admitted there have been challenges associated with naturalizing the Colt course with accent fescues and secondary rough fescues. Weeds have been a problem, especially with crabgrass, as well as poa annua and some native grasses. Rainfall amounts also determine how the accents develop each year. When rainfall is plentiful, especially in the spring, a thicker stand of accent fescue is realized which can be difficult to thin out. During periods of drought, the stands can become thin and, once seed heads are produced, there isn’t much growth afterwards.
There are also challenges for golfers. If a ball is hit long and gets into the fescue, it will stop. If carts drive through the accent areas, the fescue doesn’t bounce back and tire tracks are visible for the remainder of the season. Golfers who enter the areas to play their ball will knock down the turf.

Schwemler said there is a division among members as to their opinion of the green vs. brown look of the golf course, adding many still desire the Augusta National appearance.

“It’s just going to be a constant education for us. I do think most people are getting it.”

Schwemler said the look adopted at the Toronto Golf Club is common among many courses in the Boston, Mass. and Long Island, N.Y. areas.