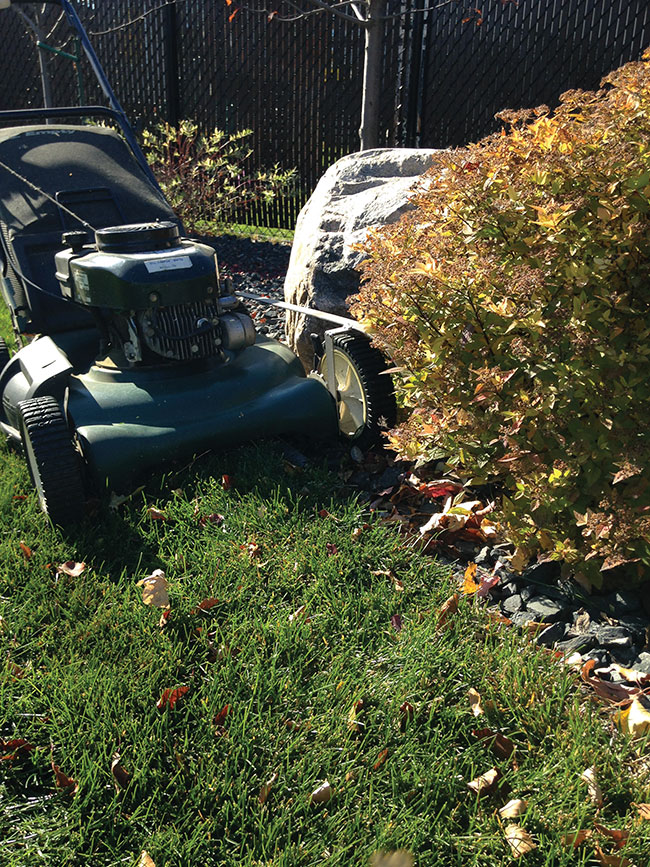 The Lawnmower Fender “lifts” the bottom branches of a shrub, allowing the mower to get in tight to mow the turf beneath without any damage to the shrub. Photo courtesy Rob Sitarz.

An Oakbank, Man. pharmacist has come up with a novel idea for safely mowing around such sensitive lawn features as flower gardens and shrubs. It’s a simple device that acts as “a third arm” to gently move overhanging flora and other obstacles from a mower’s path.

Called “the Lawnmower Fender,” the patent-pending device is affixed to the side of a mower’s cutting deck, extending beyond its front wheels, and lifts overhanging stems and branches to enable the mower to cut the adjacent grass without damaging other vegetation or obstacles.

Rob Sitarz said the concept can be attributed to his late father, who originally tinkered with the idea about 40 year ago. The current prototype has since been perfected and can easily be mounted using only a 7/16th-inch wrench.

“It’s not just a better mouse trap,” Sitarz said. “This is something totally different, and there’s nothing like that out there.”

For now, his prototype has been fabricated for use on consumer walk-behind mowers, but he said it has the capability of being adapted for commercial mowers as well.

“Having that attachment on the side of a zero-turn radius mower or a stand-on one can certainly be adapted and used on those as well.”

Sitarz recalled that as a child, his mother’s flowers and shrubs were frequently run over by the family’s mower. His mechanically-inclined father conceived a solution, and the first-generation Lawnmower Fender was born. The original model, however, required a mower’s wheels to be removed first before the device could be mounted. No longer must anything be removed prior to mounting, and the universal apparatus can be affixed to any mower brand, whether it’s self-propelled or otherwise.

“I wouldn’t be without it now on my mower. It’s like an extra hand, for lifting up these branches and stems and allowing the mower to cut through really close, and then they drop down to their original position after you go through with the mower and you’re done.”

It was only about five years ago that Sitarz revisited his father’s original concept. He took some steel, bent it into position and welded it so that it could be mounted to his mower. The device caught the attention of his neighbours, who were curious to know what the attachment was and the purpose it served. The positive feedback he received from onlookers got him thinking that the Lawnmower Fender could be taken to another level.

“That’s when I started shooting forward with it. It eliminates the need to run around with a weed eater to get into those close, tight areas around trees and shrubs and whatnot.”

Even with such tools, low-hanging branches could still be damaged, Sitarz said, adding time is saved by not having to finish a job using a second piece of equipment. The apparatus also doesn’t interfere with a mower’s cutting height adjustments, nor does it matter whether or not a mower has larger rear wheels. 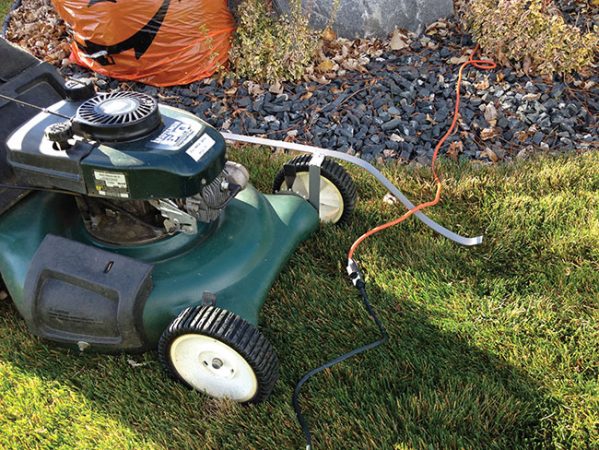 Obstacles such as electrical wiring, which can sometimes be hidden from view, are gently lifted out of danger when mowing.

The Lawnmower Fender is generally mounted opposite the discharge chute on a consumer model mower. Commercial mower mounting will likely be different – depending on the model – but the “spirit” of the device would remain the same.

Fabricated from steel an inch wide and an eighth of an inch thick, it enables bending upwards or downwards for the ideal height and to ensure it doesn’t dig into the ground. At about 40 inches in length, which allows it to attach at the opposite end to the handlebar, a break point has been crafted so that it can fit easier inside a smaller shipping box.

Sitarz said he is not taking orders at this point in the development of the Lawnmower Fender, acknowledging they would have to be manufactured somewhere other than his garage. He said he’s focusing on stirring up interest in the product for the time being.

A website has been created to showcase the device, and anyone interested can contact him for more information through the site. The website also features a number of videos that show the device at work.