IT wasn’t the spring start that Jeff Stauffer wanted to kick off his
2009 season at Credit Valley Golf &â€ˆCountry Club in Mississauga,
Ont. 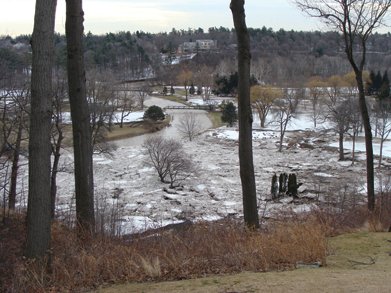 Since he began working at the private golf course in 1996, he’s seen
his share of flooding in the Credit River valley, but nothing has ever
come close to the damage experienced this year.

“February ’09 takes the cake,” said Stauffer, who begins his 11th
season this year as superintendent. “Older members are comparing this
flood to the flood of ’74.”

What sets the flood of 2009 apart from the flood of 35 years ago, however, is the amount of ice damage incurred. In 1974, upwards of four inches of rain fell in the area during a two-hour period in May. The water flow caused extensive damage to the holes situated in the valley, leaving plenty of debris to be cleaned up afterward. But because the flood occurred in May, ice wasn’t an issue.

“None of the older members I’ve talked to can ever recall ice damage like this,” he said, adding ice had damaged a portion of the eighth green in the early 1990s, “but not the magnitude of the volume of ice we suffered and experienced this year.”

The swollen water levels this year were perhaps the least of Stauffer’s concerns. It was the massive amounts of ice which formed and broke free during the winter catastrophe that caused so much damage to the golf course.
The process began in late December when rain and unseasonably mild temperatures of 10 or 11 degrees Celsius caused the Credit River to spill its banks. By January, Stauffer wasn’t able to access the valley, and temperatures returned to seasonal levels, forming ice. On Feb. 11, abundant rain began to fall about 9 p.m., accumulating to about an inch by midnight.

Stauffer said he feared the worst as the rainfall became more intense. He alerted his board of directors to expect the worst, and a meeting was set up a week later to plan a course of action.
“Every hole in the valley had ice or water on it at some point this winter. It is what it is. We were in shock, in awe of what had happened. Each time you come down into the valley, you see something that you missed the day before.”

As access into the valley became feasible, the extent of the flood and ice damage became all too apparent. Trees in the path of the flood’s current were stripped of bark at heights spanning about six to eight feet above the ground. Smaller trees were snapped in two and swept downstream. Fairways and greens were scored and scoured to various degrees. Bunkers were completely washed out and damaged extensively. Silt and debris were found everywhere. Carcusses of dead animals were discovered at different locations throughout the valley. Bridges were knocked ajar and irrigation wiring was unearthed and severed.

Stauffer said the initial shock and awe led to denial.

“We figured it’s not going to be as bad as we think it’s going to be, and then reality started to set in.”

In spite of the damage, to which he wasn’t able to attach a dollar figure by early April, Stauffer remained upbeat and considered the work required to restore the golf course to its normal playable standards as a new personal challenge.

“If I don’t remain upbeat and positive, it’s going to filter down to the rest of the staff.”

Stauffer’s goal was to have nine or 10 holes in play by the end of April. Minimal damage was realized on holes 14 to 18, and the first five holes above the valley came out of the winter without incident. The biggest challenge, he figured, was getting members from the fifth hole to No. 14—a significant trek—but a workable contingency plan had been devised to alleviate the inconvenience.

As of the beginning of April, Stauffer’s hope was to get the remaining holes back in play by no later than the end of June.

“It’s an aggressive schedule,” he admitted, “but that’s my goal.”

A sub-committee of Credit Valley’s board of directors was struck to deal with the flood damage, and some features of the club’s master plan were incorporated into the restoration process.

“A lot of bunkers have to be cleaned out and resanded and fixed up in terms of the drainage and the base. If we’re going to fix those bunkers, let’s implement what the master plan was calling for, so we’re trying to address that as well before we open in combination with a lot of this cleanup.”

Working to clean up and repair the golf course alongside Stauffer’s staff on a time and materials basis was the Kitchener-based contracting firm Gateman-Milloy. Atkinson Irrigation of Stayner, Ont. was retained to help put the golf course’s damaged irrigation system back in order. Damage to the system included both pipe and wire compromises.

Stauffer said the club has some insurance coverage against flood damage, but it’s mainly for such “hard cost” items as bridges and the irrigation system and not necessarily for turfgrass.

An irrigation consultant provided an estimate of the system’s damage and offered projections of potential pitfalls for the next couple of years. An arborist presented a written report of all tree damage, noting what the golf course can expect over the next few years.

Some of the greens situated in the valley are normally covered for the winter to keep silt off their surfaces if some minor flooding should occur. The ice flow this past winter was so severe that the covers were completely ripped from holes eight, 10, 11 and 13.

“The covers were just destroyed.”

Ice three to four feet thick had settled on the back shelf of the 10th green by late March. Using picks and chain saws, workers were able to cut the ice into removable chunks. The greens were blasted with water to loosen the broken ice andto wash silt off the surfaces. The damage beneath the 10th green was substantial, requiring extensive plugging and repair work.

Although spot repair work was believed to be all the 10th green required, other putting surfaces didn’t fare quite as well from the flood. Stauffer said he feared the drainage tile and gravel blanket on the eighth green had heaved which would require a complete resurfacing.

The front tee deck on the 11th hole, which sits adjacent to the river, was in need of complete resurfacing. The jury was still out on the condition of the hole’s rear deck as of early April.

What has helped Stauffer cope with the anxiety associated with a natural disaster of this magnitude is the understanding of Credit Valley’s membership. In fact, several members have banded together on a few occasions to help with the cleanup work. In late March, 110 members turned out on a Saturday morning, collectively contributing about 450 man hours of work.

Specialty equipment has been offered for use to the golf course by both members and suppliers as well as by neighbouring courses such as Markland Wood and from the ClubLink Corp.

“If they have something they can offer, they’re offering it,” Stauffer said. “It’s very much appreciated.”
Cleanup help has also come from other sources. Staff from the pro shop contributed about 50 hours each with raking, and even Credit Valley’s food and beverage department chipped in.

“I think they have a greater appreciation for what we do.”

Telephone calls and email messages of support have reached Stauffer from all across Canada.

The Mississaugua Golf & Country Club, which borders Credit Valley, also sustained damage from the flood. Its fifth fairway incurred significant damage, at least one green was marred, and a bridge was swept downstream.
“Bob (Brewster, Mississaugua superintendent) and I meet on the treeline and console each other,” Stauffer quipped.
Both courses enjoy a solid working rapport with one another and frequently share information deemed helpful to the other, Stauffer said.

One of the more unfortunate setbacks from the flood damage was the loss of six or seven memorial trees that had been planted in remembrance of deceased club members. Stauffer contacted the families directly to inform them of the situation, and the club is ready to replace them, although their location could change.

“If they want them right back where they were, that’s fine. If they’d like us to find another location, we’ll give them that option as well.”

As of early April, Stauffer figured the cleanup and restoration work was moving along on scheduled.
“I see progress being made. When I think about how far we’ve come in two weeks, this is huge. I’m still optimistic that by mid-to-late June, we can give them holes eight through 13."

Stauffer said he wasn’t sure how to greet the early April weather, saying rain would help melt the ice chunks, but would also slow down work in other areas.

“I want the sun to come out and I want it to start warming up, but I don’t because that means I’m going to have to start redirecting some of my people to mowing.”

Holes nine and 10 were in need of resodding which Stauffer said he hoped to tackle in early May.

In spite of the overwhelming setback, Stauffer has maintained a sense of humour throughout his ordeal, chuckling over one of the more unusual finds among the washed up debris on the property.

“We found a tremendous amount of coconuts, either whole or in parts,” he said. “I bet we picked up well over 100 coconuts in different spots. It’s really bizarre how coconuts can show up.”

He said he wasn’t sure where they came from, but he suspected they were dumped from someone’s backyard upstream.

“It’s not the spring I was hoping for. It’s one of those unfortunate things. It’s a little bit of a reality check in some sense. We all think we’re in control of a lot of things, but at the end of the day there are things that are just out of our control. Mother Nature’s one of them.”