Those who invest in their backyards, either by hiring a landscape contractor to design and build special features or to have their lawn pristinely maintained, or who simply wish to spend more time outdoors, want to enjoy the fresh air and tranquility of their surroundings without having to be driven indoors by pesky insects.

Mosquitoes can easily ruin the outdoor experience in moments, relentlessly buzzing about people’s heads and lighting on human flesh for a quick blood meal. Suddenly, that new backyard patio or gazebo is abandoned in favour of a safer haven indoors. The homeowner realizes his investment in an attractive, comfortable place of relaxation has gone for nought. 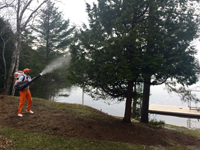 Although there is the option for people to coat their bodies in mosquito repellent, they are turned off by the product’s stickiness and odour, and the biting insects will continue to hover about.

A new Canadian company has stepped in to return backyards to their rightful owners without them having to resort to such band-aid measures as spray-on repellents.

Mosquito.buzz began operations in January with three locations in Ontario and two more in Western Canada. Company COO Jordan Lavin, who serves in the same capacity with Nutri-Lawn, said there is a market for mosquito control in Canada, especially among home and cottage owners who account for about 85 per cent of Mosquito.buzz’s business. The remainder of its clientele includes campgrounds, parks, restaurants with outdoor patios and golf courses.

A third and equally important customer target is the one-time outdoor event such as weddings and large family gatherings.

“We’ve done lots of weddings, anniversary parties and all kinds of outdoor events that are tented and not tented,” Lavin said. “It only makes sense that if you’re going to have a backyard wedding for 150 people, that it’s going to be mosquito-free.”

On the surface, one might think mosquito control is a natural marriage to lawn care, but Lavin said there is a separation between the two.

“This is actually several degrees off course from lawn care in the sense that they really don’t go hand in hand, and consumers really wouldn’t associate one with the other.”

Lavin said mosquito control has actually been delivered as a service of Nutri-Lawn for the past couple of years, but has now evolved into a separate company. Although both the service and control product have been delivered previously, 2016 marks the first season for the control to be provided under the Mosquito.buzz brand name.

“It’s taken off quite well and we’ve had pretty good updates from customers and excellent results on the product side. We felt it had enough interest to be able to stand on its own as a stand-alone brand.”

As the name implies—with a dot separating the words “Mosquito” and “buzz”—it is also the company’s web address (http://mosquito.buzz ).

Lavin said that although the business models of mosquito control and lawn care are similar, they are generally not related.

Mosquitoes are targeted in areas of a property where they would commonly rest and hide, such as the underside of leaf surfaces, dense plant material which includes trees, shrubs, hedges and ground covers, under decks and other places where they tend to hide.

The customer can choose either an all-natural or synthetic control product which provide slightly different residual activity based on an area’s climate and weather conditions.

The company’s main barrier product contains a synthetic form of pyrethrin which is a natural by-product of the chrysanthemum. The natural product consists of concentrated garlic which is stronger and more potent than the type used in cooking.

Lavin said the control product takes immediate effect and dries in about 30 minutes. Rain shouldn’t impact its effectiveness, but technicians will avoid fogging during precipitation to allow proper drying time.

The initial strategy is to manage standing water and to apply larvacide to areas where mosquitoes breed. Mosquito control is especially important today with both the West Nile and Zika viruses posing a real health threat to the human population.

Both the natural and synthetic variations of the control product are safe among plant material and are designed to be absorbed by plants so that they can provide residual control for mosquitoes when the insects are feeding on plant juices.

In spite of the product’s safety in the presence of plant material, sensitive areas such as flowering plants and vegetable gardens are not treated.

The products are regulated by Health Canada and approved for use by the Plant Management Regulatory Agency. They have low toxicity levels when in contact with mammals.

Licensing for mosquito control application is not the same as that for lawn care pesticide use.

“It’s a completely separate entity,” Lavin said, adding the licencing structure is more akin to that for structural pest control. He said there are still the usual governmental hoops to jump through in order to acquire the proper licensing.
A four to seven-application program covers an entire season depending where in Canada a customer resides. Applications are made about every 14 to 21 days, beginning in mid-May which covers a season through to the Labour Day weekend. Using backpack equipment allows technicians to manoeuvre in tight locations to ensure no target areas are missed.

At present, Mosquito.buzz has locations in Toronto, Kitchener and the Muskoka area in Ontario as well as in Winnipeg and Calgary. Some are operated by franchisees and others are corporate-owned locations.

“Most areas in Canada have mosquitoes and have a mosquito problem we can solve.”

He said he expects other locations to be up and running in the near future. For the most part, the company represents a stand-alone business opportunity, he added, noting he expects it will become a large enough operation that each individual business will be self-sustaining.

“We see these operations will grow to a size where the mosquito operation has its own two legs to stand on.”

Most of Mosquito.buzz’s contact will be direct to the consumer. Lavin said he is unsure if there will be a lot of affiliation with lawn care, but lawn care companies can contract out the mosquito company’s services if approached to do so by the customer.

A mosquito control guide can be downloaded from Mosquito.buzz’s website. It contains such information as the lifecycle of the mosquito, West Nile virus, self-protection against mosquitoes, prevention of mosquito populations and effective control options against mosquitoes.

Mosquito.buzz is a member of the American Mosquito Control Association.