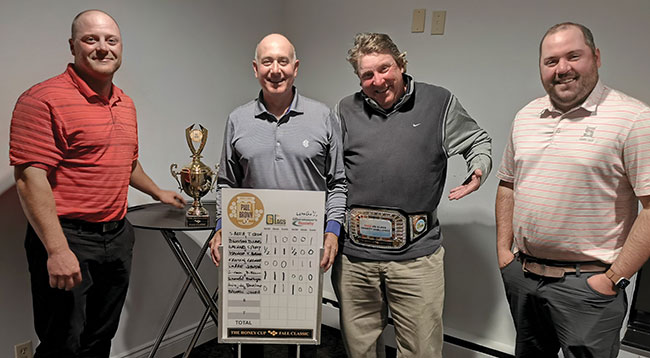 Jamie Spencer, captain of the GLAGS team, wears the championship belt after his team defeated the KEGS team in the first Honey Cup Fall Classic, in memory of Paul Brown. Looking on are, from left, Gregg Menard, captain of the KEGS team; Bayer’s Ryan Beauchamp, organizer of the golf event; and Joel Henderson, superintendent of the host Sarnia Golf & Curling Club.

For an 11-year period spanning 2009 to 2019, two regional Ontario associations of golf course superintendents battled one another on the golf course in a friendly match play showdown to not only earn bragging rights, but to hoist the much coveted Syngenta Cup trophy and championship belt.

The organizer of the annual October event was former Syngenta turfgrass specialist Ryan Beauchamp, himself a former superintendent at both the Glen Abbey Golf Club in Oakville and Union’s St. Thomas Golf & Country Club. Late this past summer, circumstances saw Beauchamp change careers, and he has since taken on a similar role with Bayer Environmental Science.

Not wanting to discontinue the match play event he founded more than a decade ago, he convinced his colleagues at Bayer to take over sponsorship of the fall showdown between the Greater London Association of Golf Superintendents (GLAGS) and the Kent-Essex Greenkeepers’ Society (KEGS). Instead of renaming the event with Bayer in the spotlight, however, he felt it was important the competition be rechristened to honour the memory of the late Paul Brown, former superintendent at the Sarnia Golf & Curling Club, who died in an on-course accident in June of 2017. Thus, the first Honey Cup Fall Classic, in memory of Paul Brown and sponsored by Bayer, was played Oct. 6 – fittingly – at the Sarnia club.

The term “Honey Cup” is derived from Brown’s passion for beekeeping and honey production which he started several years ago while the superintendent at Maple Downs Golf & Country Club in Vaughan, Ont. Although his hives were located on the private course’s property, they belonged to Brown. They were eventually turned over to superintendent Paul Dermott at the Oakdale Golf Club in Toronto when Brown left to become superintendent at the Sarnia club.

Beekeeping and honey production was something Brown loved, his son Greg said.

“We did all the work ourselves,” he recalled from those days at the Maple Downs club. “We had an old hand crank and I’d sit there at night, spinning all the honey out.”

Joel Henderson, superintendent at the Sarnia Golf & Curling Club, serves up some brisket to Essex Golf Club superintendent Chris Andrejicka in between holes.

Greg Brown is currently assistant superintendent at the Essex Golf & Country Club in Windsor and was among the KEGS team in October’s competition. He said he was “blown away” by the idea to rename the match play event after his father and wasn’t expecting such a gesture.

“The support from everyone in this room and the industry and from everyone at this club (Sarnia Golf & CC) has been beyond what I could ever expect,” he said. “When Ryan brought this up, I was floored by it.”

Paul Brown resurrected his passion for honey production upon his arrival in Sarnia, and the labour of love has continued under the supervision of his successor Joel Henderson, who said there are currently four hives located adjacent to the second hole and which produced about 125 pounds of honey this year.

Henderson noted that one of the club’s members, who also sits on the board of directors, wished to get involved in a project that honoured the memory of Sarnia’s late superintendent. The member sponsored the lunch and dinner for the participating GLAGS and KEGS golfers.

Although he didn’t play in the event, Henderson served an important role as on-course chef, offering his beef brisket and potato leek soup to participating golfers who stopped by his food station.

At the end of the day, it was the GLAGS team which persevered over the KEGS team, winning the match play event by a score of 9½ to 5½ – a “shellacking,” in the words of Beauchamp. The 18 holes of play were divided into three segments of six holes apiece, with one point awarded to the winner of each segment. Five twosomes from each side competed against one another in best ball, alternate shot and scramble legs. Counting the previous former Syngenta-sponsored competitions, the victory by GLAGS was its second in a row, giving the association an overall 7-5 edge over its KEGS rival.

Only two of the five matches – one on each side – were 3-0 sweeps while GLAGS dominated the remaining three matches.

GLAGS will be the home team in 2021 at a yet-to-determined venue.

During breaks in the five-course meal served after golf, Beauchamp led a round-table discussion of Bayer products and best practices, highlighting Tetrino for the foliar and systemic control of such turfgrass pest insects as white grubs and the annual bluegrass weevil, and Dedicate Stressgard for the control of snow mould.