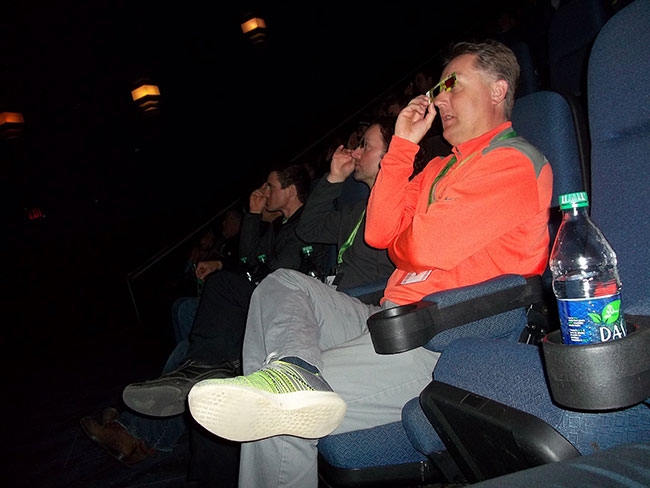 Those who attended Syngenta’s turf forum in Milton, Ont. donned 3-D glasses to watch the Cineplex screen during portions of the day’s presentations.

Understanding how fungicides work and knowing what part of the plant should be targeted will greatly assist golf course superintendents with their spraying programs, an audience of superintendents was told in March during a Syngenta-sponsored forum in Milton, Ont.

“When you understand how these get into the plant and how they work their way through, it might make you understand a little bit more of your disease management strategies,” Syngenta turf and application specialist Ryan Beauchamp said at a Hollywood-themed presentation at the city’s Cineplex Odeon theatres.

Surface coverage is the key with contact fungicides, he said, cautioning that water volumes, sprayer set-up and nozzle selection must all be correct for maximum effect. Establishing good coverage is the end goal.

When targeting the pathogen, achieving good foliar coverage is imperative.

Different strategies are required to effectively control specific diseases. For crown rot anthracnose, the objective is to reach the stem base with a little higher water volume.

“It makes a big difference on how much water you put out to make those chemicals work right,” Beauchamp said.

With summer patch or take-all patch, the objective is to target the plant’s roots or underground tissues.

“You need more water again, or nozzles that can deliver that water into the right area.”

Selecting the right nozzle for the job is an important consideration, Beauchamp said, recalling that during his previous career as a golf superintendent his knowledge of proper nozzle selection was limited at first.

He said that by placing water-sensitive paper near the target and then spraying, the resulting pattern will help to decide whether spray droplet size or water volumes need adjustment.

A trap that superintendents can fall into easily is thinking that calm days without wind are ideal for spraying, Beauchamp said, adding many are apt to think a foggy day is ideal.

“When it’s foggy, it’s not windy which means it’s a great spray day,” is what some superintendents are inclined to believe, he said.

Often, a fungicide’s label will state: “Do not apply in periods of dead calm.” Beauchamp said there is a relationship with air and wind in spray droplet management, “and you really need it to get up a little bit, but not a lot.”

A wind speed target of three to seven miles per hour is ideal, he said.

“This is more ideal to spray and put the droplets where you want them to be.”

Dead calm conditions, on the other hand, create a challenge, he said. During periods of dead calm, an inversion layer is present with cool air atop warm air atop cool air.

“It acts kind of like a lid, and when it traps that with that fog – when that fog’s there, there’s no wind, it’s not moving – you do not get convective overturning of the air, allowing the drops to actually hit the target where you want.”

Under calm conditions, up to six times the amount of droplets are moved off target and don’t hit their intended mark. The efficacy of the product is challenged if the fine droplets miss the target. With a standard TeeJet red nozzle under foggy conditions, the anticipated efficacy or day’s control won’t be achieved with finer droplets, Beauchamp said, adding a switch to the white nozzle will produce better results under such conditions. It will take more tanks to get the product out, but more days of control will be realized.

Beauchamp advised to watch for environmental clues that suggest the best spraying conditions. Neither strong wind nor still calm are desired.

Tank mixing
When mixing spray tanks, it’s easy to “bung up” the sprayer quickly if it’s not done in the correct sequence. Fertilizers and other chemistries should not be put in first, he advised. Water-soluble packs and clean water are the first things to go in.

Caution should also be exercised when mixing in fertilizers with boron, he added.

“It affects the breakdown of the water-soluble packs immensely. Quite often they don’t even break apart at all, so you get a big puke of chemical coming out of your nozzle if it does break down a half hour after you get out on the golf course.”

Beauchamp said there are ways to save money and squeeze more out of maintenance budgets by the means in which tank mixing is done and how sprayers are used. If 10 per cent can be saved on a $50,000 chemical budget, that $5,000 can be earmarked for something else.

Over-agitating can lead to “shearing” chemistries “right off,” he said.

If using a nurse tank with a high-pressure tank atop it, chemicals should not be used, Beauchamp said. It should be designated for fertilizer use only.

If too much oil-based product is put into a tank, invert emulsion will occur, the product can’t be used, and the tank will have to be dumped.

When dealing with patch diseases, the advice is to apply water. Whether it’s summer or take-all patch, the control product is put down and it’s “drenched” in.

If the advice is to drench in the product, one might be inclined to turn on the irrigation system. With summer patch, 2½ to five gallons of water would be expected.

Water pH levels
Beauchamp discussed water pH and how much it mattered. If the water pH falls into the ideal range, the pH level probably doesn’t matter, he said. But once outside the acceptable range, the stability of the product in the tank will be compromised.

“It means it’s not going to be stable in your tank for that long.”

The ideal pH range is five to seven. Beauchamp suggested water should be tested beforehand as well as after chemistries have been added because they can change the pH in the tank and affect another product from getting the efficacy needed.

Product delivery
How the product is delivered to its intended target has an impact on how well the product will work. Nozzle spacing, boom height, nozzle type and output, ground speed, pressure and water-carrying volume are important
considerations. A product may seemingly go wrong, but there may be other explanations, he said.

Nozzles set 12 inches from the ground don’t meet the ideal height, but, on undulating turf, there will be instances when they are a foot above ground. Nozzles pointed straight down toward the target, with forward movement of the sprayer, discharge droplets vertically that mainly hit one side of the target leaf. That might not matter as much with systemic fungicides, but it does matter with contact products.

“So when you get that happening, you’re basically getting 50 per cent more deposits on the front of the target versus the back,” Beauchamp said. “Do you think that’s going to make a difference on the efficacy of your control of contact fungicides?”

XC (extra coverage) air induction nozzles work differently. The rear angle hits the target differently based on forward speed. It gives better coverage on the leaf – front and back – and makes contact fungicides work better by allowing the use of lower water volumes.

Beauchamp investigated why a product didn’t work as expected during the spring season a number of years ago. Disassembling the sprayer, he found the filter system full of silt. The bottom of the tank was also filled with silt. It was discovered that the year before, water had been pulled directly from a creek to fill the sprayer. The golf course had all winter to clean everything out, but chose to carry on in the spring.

White spoke about the next generation of turf protection while Agnew offered a three-dimension look at turf diagnostics. Several slides were projected onto the large theatre screen while attendees viewed the images with three-dimensional glasses to digest the full scope of his presentation.

The speakers outlined some of Syngenta’s newest products, including the fungicides Secure and Instrata II. They are, respectively, used to control dollar spot and snow mould. Both are registered for use in Canada.

To learn more about these products, visit www.greencastonline.com/product/secure-fungicide/overview and https://www.turfandrec.com/products/effective-snow-mould-control-with-low-amount-of-active-ingredient-4832.