Know the challenges turf faces during the winter months. 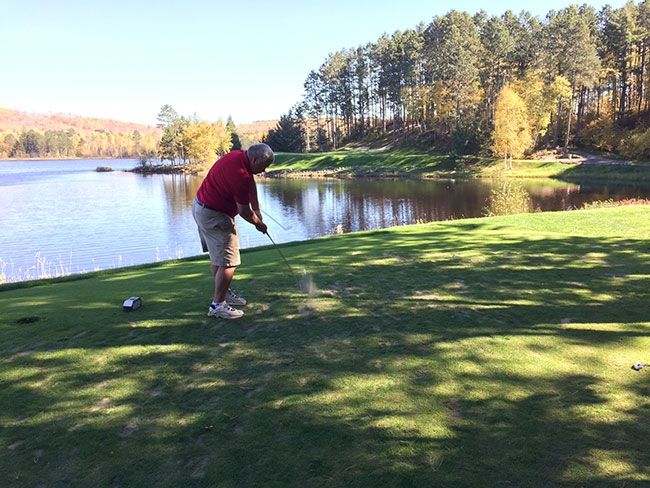 A golf tee that is predominantly in shade. Olds College’s Katie Dodson said the more turf is exposed to sun, the more cold hardy it will be.

Katie Dodson grew up in golf course management. Her father and grandfather, two uncles and a brother all are – or were – golf course superintendents, and she herself was an assistant superintendent (in Whitehorse) before switching to the research side almost 15 years ago.

On Nov. 17, the senior turfgrass research scientist at the Dr. Robert Turner Research Centre at Olds College in Alberta was in Winnipeg to share the latest information on winter cover with Manitoba golf course superintendents and their crews (and students) attending the 2017 Manitoba Golf Course Superintendents annual golf and turf conference.

Dodson opened her presentation with an overview of how turfgrass can be damaged over the winter. Desiccation, she explained, occurs when the amount of moisture has been depleted due to lack of snow cover.

“Turfgrass needs access to a small amount of moisture to survive the winter,” she said.

Anoxia – a lack of access to oxygen – can take place when greens are covered over with ice or in some cases when impermeable tarps are sealed with heavy snow cover for long periods of time.

“The biggest problem comes from people walking on or driving over frozen turfgrass,” she noted.

Other potential dangers that she identified were thaws followed by freezing temperatures in the spring and soil microbes that are active over the winter.

Dodson next addressed the topic of cold hardening in the fall and hardiness levels throughout the winter. She explained that hardening is promoted by a combination of low temperatures, shorter periods of daylight and reduced moisture levels. Primary hardening is brought about when the temperature nears zero.

“I can tell you that if you overfeed your turfgrass in the fall, it will not be fit for the winter.”

She noted that plants de-harden in the spring when the temperatures warm up. Once again, though, a thaw followed by a freeze can harm the grass.

Dodson spoke about research ongoing at Olds as to the use of tarps or other covers to protect turfgrass over the winter.

One potential concern that she identified in using tarps is anoxia that can occur when the tarp is laid down on still warm soil. The solution, she said, is to use venting systems such as micro perforations. The perforations should be punched out so that they create hill-shaped mounds that allow for gas exchange, while limiting water accumulation on the canopy.

“We are still working to establish guidelines as to when to install tarping and how often venting should be undertaken,” she noted.

Dodson and her fellow researchers have also determined that shade is a factor in poor turfgrass health.

“Shade results in shorter roots, longer stems and grass that is least tolerant to cold,” Dodson reported. “Turfgrass cold hardiness is best when the grass is exposed to a lot of sunshine.”

Soil salinity on putting greens may also be a factor in how well turfgrass overwinters, she added.

“We are the first to do research in this area,” she said. “Sandy soil or poor water quality may result in higher levels of salinity. In our research, we have found that creeping bentgrass fares better in sandy soil than annual bluegrass when it comes to cold tolerance.”

She added that poa annua is more susceptible to cold and winter injury than bentgrass.

Dodson also addressed the efficacy of fungicides in controlling overwintering diseases such as grey and pink snow mould. Pink snow mould, she said, can occur even when there is no snow cover. Grey snow mould develops after 90 days of snow cover.

“We tried Insignia, Instrata, Trilogy and Premium,” she said. “They all performed well. We are currently experimenting with a fungicide called Affirm.”