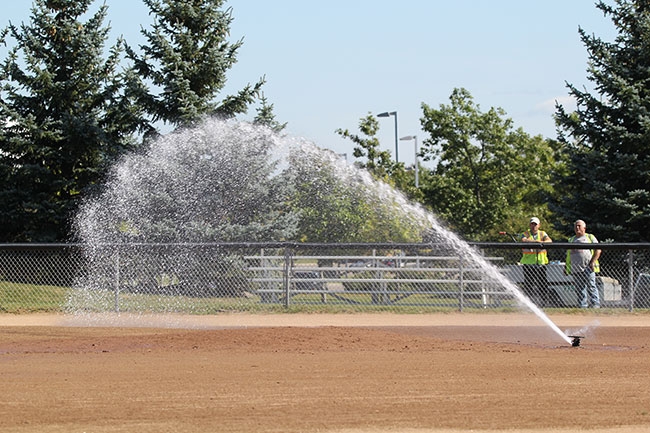 Better infield dust control and improved playability are the result of water cannons having been installed at all 10 ball diamonds at Moncton, N.B.’s CN Sportplexe. The completely skinned infields were notorious for the amount of dust that would be kicked up by the prevailing winds that negatively affected the way the game was played.

“The players are a lot happier that they don’t have to play in the dust because this place turns into a dust bowl when it’s windy,” CN Sportplexe caretaker Gorden Horsman said. “It’s a lot easier to maintain our infields and keep them moist.”

The idea of installing water cannons at the ball diamonds originated about four years ago when Horsman was talking with Gord Dol, president of Bond Head, Ont.-based Dol Turf Restoration Ltd., who suggested water cannons for moisture control was worth considering.

Horsman decided to experiment with the cannons, realizing they solved the problem of keeping dust in check, and they were finally installed last year. Selling the idea to the city to free up the necessary funding, however, wasn’t quite as easy at first.

“I showed our director the experimental heads and his comment was, ‘Very good idea. Go ahead.’”

Prior to the cannons’ installation, the skinned infields at the complex’s ball diamonds were hand-watered.

“It used to take four or five guys to go around and water them by hand. Now, we have the ability to use two guys. One guy is at the pump and one guy is at the field – for safety reasons – so that nobody is on the infield when we water. That’s why we have the valves. We just tell everybody to stand by, we water it and back on the field they go.”

When the infields were manually watered – one at a time – the crew of four or five individuals would move on to the next field, but found by the time they were finished with the final field, the first diamond at the complex needed watering again.

Horsman said as far as he knows, Moncton is the only municipality in the province to have installed water cannons on its ball fields, adding many communities don’t even have irrigation on their fields.

“We’re lucky we have all the infrastructure for irrigation, so we just tied into the lines that existed. We really didn’t have to do a lot of work other than to tie into the lines. We dug down an extra three feet and used a pea stone to create a dry well under the head so when we turned the head off, the water would go down and not pool on the area.”

The 10 ball diamonds were already outfitted with about 300 heads in total to irrigate the turf outfield.

The water cannons were supplied by Dartmouth, N.S.-based Irri Plus Inc. and installed by PE Irrigation. The cannons, positioned behind the pitching mounds, shoot water out about 100 feet in a single throw. They provide full coverage of the skinned infields – an area of about 25,000 square feet – in three to four minutes. The cannons put out 55 gallons per minute with a pump pressure of 70 pounds per square inch.

“I was getting tired of spending so much time watering down fields and then turning around and having to go right back and do it all over again within an hour.”

The cannons are operated manually with the two-person operation completing one field at a time.

“We’ve seen a lot less dust movement,” he said, adding about 90 per cent of the game is played on the infield.

The high water volume has no adverse effect on drainage. Most of the infield drainage is surface drainage, with a 1.67 per cent slope from centre. The sand-based outfield already promotes good drainage, Horsman said.

An additional three cannons have also been installed at the Hal Betts softball fields in Moncton.

The CN Sportplexe covers 95 acres of land at the former site of a Canadian National Railway repair facility that had regressed into a brownfield from the late 1980s through the late 1990s. In addition to the ball diamonds, the facility also includes six soccer fields, four indoor ice rinks and an air-filled dome that accommodates indoor soccer, football, paintball and golf.