Marie Thorne was a trailblazer among women who were few in the industry when she first began. 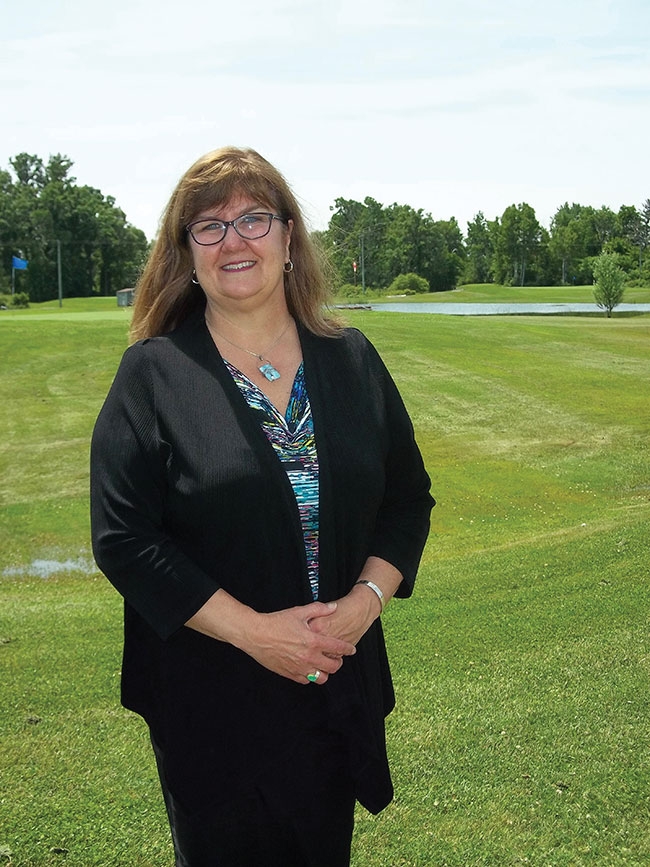 Marie Thorne has retired from Syngenta Canada following a career in the industry that has spanned four decades.

A well known and respected figure in the Canadian turf and grounds maintenance industry – and perhaps most notably as a pioneer among women – has retired from a career that spanned four decades.

Marie Thorne put in her last day in July as senior turf specialist at Syngenta Canada Inc. Even though her employment with Syngenta officially dated back only to 2000, she had been working in the professional turf field since 1983 with other companies that were impacted by either acquisition, divestiture or merger, eventually meandering toward the formation of Syngenta.

“It was just an indication of all the consolidation that started early in the chemical business,” she said, reflecting on her roots that began with Shell Chemicals in 1981. “There had to be over 100 companies – large and small – and now it’s boiled down to four.”

Thorne said it is amazing to look back at the history of the chemical industry and see how much consolidation has occurred over the past few decades.

A career in the turf industry was never on her radar at the outset. The native of Cape Breton Island had originally planned to become a veterinarian but found she most enjoyed the plant-based science courses she studied at Nova Scotia Agricultural College (now a part of Dalhousie University) in Truro. Switching gears, she pursued her associate diploma in agriculture and completed her studies at the University of Guelph in 1981, obtaining her bachelor-of-science degree in agriculture with a major in plant protection.

“I still use some of those basic principles from way back when, even today.”

One of her first positions with Shell Chemicals upon her graduation from the University of Guelph was to sell corn herbicides in a new eastern Ontario sales territory. It was there that Thorne first met Gregg Allan – currently head of customer service for Syngenta Canada – when he was Shell’s product manager for animal health products.

“Gregg Allan became my career long mentor in the business. Under his leadership and guidance, my career path forged ahead. I will be eternally grateful to him for his unending support and strategic mind.”

During her first two years with Shell Chemicals, the company determined its agricultural chemical business wasn’t core to its overall strategy and spun off the division to Ciba-Geigy. The purchase of Shell Chemicals represented her first move in the industry and opened the door in 1983 to kick-start her career in turf. Ciba-Geigy, a large Swiss-based corporation known primarily for its pharmaceutical products, split Shell’s former eastern Ontario territory into two divisions: agriculture and lawn and garden. Thorne was assigned the lawn and garden division that included turf products.

“That was my first introduction to the turf business,” she said, noting she called on large retail outlets and garden centres with the Green Cross brand. Additionally, she said she experienced “great joy” in working with sod growers and golf courses in the Ottawa area.

“It was a refreshing diversion from the retail business and it also enabled me to utilize my technical experience. I really liked the turf side of the business because I like the people. I got involved. I called on the sod growers as well as the golf courses in that area. It was a lovely diversion from calling in on retail stores and setting up displays and things like that. I really, really enjoyed it.”

More changes in chemical industry
Further changes came about in the chemical industry in the 1990s. In 1996, Ciba-Geigy merged with Sandoz to form Novartis Crop Protection. In 1999, Thorne was working for Scott’s Canada as distributor manager for the retail division. She missed turf and wanted to return to that part of the business.

“Retail was a great business experience, but I was missing my technical and turf ties.”

In January 2000, she assumed the role as business manager for the Scott’s Canada professional turf chemicals division that was subsequently acquired by Novartis Crop Protection Canada in July 2000. Allan successfully led the negotiation for this win-win deal, and Thorne was hired as senior turf specialist to help build the business and bring the newly registered products to market.

In November 2000, Novartis merged with AstraZeneca to create the newly christened Syngenta. She said the transition from Novartis to Syngenta was smooth as there was a high level of commitment within Syngenta to service the professional turf industry.

In the mid-1990s, Thorne became intrigued by the turfgrass manager’s short course offered through the University of Guelph and enrolled in the program, graduating at the top of her class. She said that although she had a good foundation with her bachelor-of-science degree in agriculture, she thought an educational upgrade with a focus on turf was in her best interests.

Her educational pursuits didn’t end there, however. She said it had been a long-held desire of hers to obtain some sort of certificate from Penn State University, acknowledging the institution was considered leading edge in the world.

“It was a global leader in cool season turfgrass research and I wanted to have some sort of affiliation with Penn State.”

“I’ve always been a huge believer in continuing education. I don’t believe in the adage, ‘You can’t teach an old dog new tricks.’ It’s really contingent upon oneself to stay up with the new technology.”

A number of people she met along the way in the industry contributed toward her growing education. One she singled out was the late Gordon Witteveen, the longtime superintendent at Toronto’s Board of Trade Country Club, the author of several turfgrass technical manuals and a mentor to many current golf course superintendents.

“He was always behind promoting women in the business. He was a networker extraordinaire. He knew a lot of people, and he kind of took me under his wing a little bit and introduced me around.”

After writing the book Practical Golf Course Maintenance, Witteveen asked Thorne to review for accuracy a chapter about spraying and included her in the book’s acknowledgements.

Thorne worked with Witteveen over the years with the Ontario Turfgrass Research Foundation’s fundraising golf tournament.

Marie Thorne has retired from Syngenta Canada following a career in the industry that has spanned four decades.

Career highlight
The one career highlight that stands out most, however, was her involvement in the founding of “Superintendent University,” having helped develop it from the ground floor. It was based on the success of “Grower University,” a program created within Syngenta to nurture business skills among growers in agriculture.

“Gregg Allan thought that the concept of Grower U could be adapted to the golf industry. It was very gratifying to be at the very beginning and developing the curriculum for Superintendent University with Don Barclay at the Ivey Business School.”

“It’s gratifying to see the number of alumni that we’ve had go through that program that really made a difference for them in their lives and careers.”

Since the program’s inception in 2009, more than 250 superintendents from across Canada have taken part in the event.

The program has since been administered by Syngenta’s Ryan Beauchamp and has expanded to include “Assistant Superintendent University.”

“Where else would superintendents and assistants have the opportunity to attend the Ivey Business School for a customized curriculum on the business of golf?”

Throughout her career, Thorne travelled from Newfoundland to Vancouver Island, meeting and developing relationships with numerous golf superintendents, assistants and spray technicians. She would often be taken to areas on golf courses where problems growing grass existed.

In a typical year, business travel kept her away from home for more than six months, including a top-heavy first quarter made up of industry conferences, presentations, retailer meetings and consultations with superintendents.

“That afforded me the opportunity to meet some great people,” she said, adding she had no regrets about the need for travel, although she confessed it became a little more strenuous with age and changes in time zones. “It was a great run, an absolutely great run, and the bonus is all the great relationships I’ve nurtured right across the country.”

Thorne said she often thought how interesting it would have been for her to pursue a career as a golf superintendent. As a woman, she said she considers herself a bit of a pioneer or trailblazer for women in the business because there weren’t many in the industry for most of her career.

“If you are surrounded by great people who are very passionate about what they do, that without a doubt is the highlight because there is a lot of personal gratification in knowing a lot of wonderful people across the country.”

Although Thorne worked in the chemical industry for her entire career, she looks at it from another perspective.

“I’ve never really thought of myself being in the chemical business. I’ve been in the business of making superintendents look good. It’s was a different motivator from within my heart to really want that superintendent to look good in the eyes of his membership or his owners or board or greens chairman.”

During her final months at Syngenta, she helped find and groom her successor. Taking over her position is Jason Steadwell who had been sales manager at Even-Spray & Chemicals Ltd. in Winnipeg and had worked with Thorne previously for nine years.

She was originally slated to retire at the end of April, but Steadwell wasn’t hired until the early part of that month.

“I deeply wanted Jason to be successful, so I extended my time for an extra three months to give Jason the time to transition properly.”

Together, they went on a three-month road trip to Western Canada so that Steadwell could meet Thorne’s contacts in that part of the country and it gave her the chance to say goodbye to her business colleagues. Previously, she travelled to Atlantic Canada in the first quarter to help turfgrass specialist Scott White transition to that area.

When news of Thorne’s retirement was made public, accolades poured in from superintendents across the country, with whom she had the privilege of working throughout her career. She was granted honourary lifetime memberships in the British Columbia, Manitoba, Ontario and Atlantic golf superintendents associations and was given special recognition at the Alberta Property Managers and Canadian Golf Superintendents Association conferences.

During her final weeks at Syngenta, she worked on some new product launches that are scheduled for 2019 and helped with the redesign of the company’s GreenCast website.

Looking ahead to her retirement years, Thorne said she might take measures to improve her golf game. But she added her trained eye to spot inconsistencies on golf course turf could interfere with her concentration on the game itself.

“It would be weird not to make a note on the scorecard to let the superintendent know if I saw some fungus brewing out there. Not sure if I can ever simply concentrate on making the putt with all that grass to observe.”

Her retirement plans also include some travel for which she plans to budget for one trip of significance each year. China and England are among the destinations at the top of her list.