Features Agronomy
How anthracnose may be affected by cultural management practices 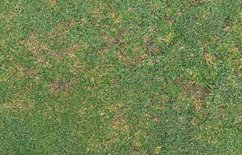 Speaking to more than 250 superintendents and their assistants in Waterloo at the 20th annual Ontario Seed Company/Nutrite professional turfgrass seminar, Murphy looked at how various cultural management practices affect the disease on annual bluegrass.

Researchers began to take note of the disease when it became particularly problematic around the turn of the millennium.

"At that time, we weren't sure what factors were really causing this disease to become more problematic," Murphy said. "It was suggested that a lot of our management practices that put stress on turf were maybe related to this disease, but we didn't know which, if any, of these management factors made the disease more severe."

Anthracnose is also known to attack creeping bentgrass, but it's more prevalent in poa annua. Although it can be present during the spring and fall, it is most aggressive in the summer during periods of extreme heat and humidity. Symptoms begin as small yellow or orange-coloured spots. As it progresses, it can coalesce and cause extensive damage by blighting younger leaves and shoots. The basal rot phase of anthracnose is the most severe.

Southern Ontario and the northern regions of the United States have become especially prone to the disease.

Murphy is one of 23 researchers from various institutions who is looking at how anthracnose is affected through normal cultural management practices.

It's been determined the disease has developed a resistance to certain fungicides, and studies have been conducted to see if such practices as mowing, fertilization, plant growth regulation and topdressing may hinder or drive anthracnose on. Murphy said the objective of the research is to determine whether these practices add severity to the disease or if manipulation of them can make anthracnose less severe.

In a study of fertility, one test plot was fertilized with one-tenth of a pound of nitrogen per month while another received four-tenths of a pound. The lesser amount of nitrogen contributed to a greater presence of the disease.

"What we're recommending is for a summer program, if it's at all feasible for you to increase your amount of fertility during the summer months, do so because you will see a benefit from that type of management change."

The greater amount of nitrogen led to reduced thinning of the turf due to anthracnose damage. Murphy recommended applying sufficient amounts of nitrogen to maintain adequate vigor of the plant through light, frequent applications during the summer months.

"Soluble summer nitrogen fertility is a good tool to try to combat this disease."

Mowing trials were conducted with cutting heights ranging from one-tenth of an inch to .14 inches and mowing frequencies at seven cuts per week vs. 14 cuts. The higher height of cut resulted in the least amount of disease.

"Small, subtle changes in your mowing height can have a big impact on how severe this disease will be. If you can afford to raise your cutting height, the better off you are."

Murphy said he figured an increase in mowing frequency would make the plant more susceptible to anthracnose, but "double cutting did not have a negative effect on this disease."

"There was more disease with the non-rolled treatments which goes against the normal conventional wisdom," Murphy said. "We expected to see things like double cutting and rolling to cause problems, yet the data is telling us the complete opposite."

He said the researchers believe this to be the case because the turf is getting a truer cut with such programs. Turf that is rolled and smoothed relieves surface stress because scalping and injury are reduced.

Murphy recommended mowing heights of 3.2 millimetres or higher to best ward off the disease. However, if clubs require increased playability, they would be better off to mow twice daily or incorporate rolling than to drop their height of cut if they wish to achieve green speed relative to the disease problem.

The trials were based on ball roll speeds of 10 feet.

"We're able to give superintendents recommendations for mowing and rolling programs that will give them reasonable playability without intensifying the disease to a great extent."

Research involving rollers has since compared data between vibratory and sidewinding rollers, so far showing no discernable difference.

Growth regulators are commonly used on greens today as a means of shutting off seed head production and allowing the plant to divert carbohydrates to root and shoot growth.

Murphy said research involving topdressing indicates there is more reason to practise it more often than less often. The less frequent one topdresses, the more likely the disease will be found, he said.

"What we think happens with sand topdressing is really kind of a physical feature," he said. "There may be some other physiological effects as well. We think it's improving the structure of the thatch. It's supporting the mower better so that the mower doesn't dig down in the turf and scalp it as badly. We think topdressing helps support the mower and get much better quality of cut and minimize the scalping kinds of conditions you get without topdressing."