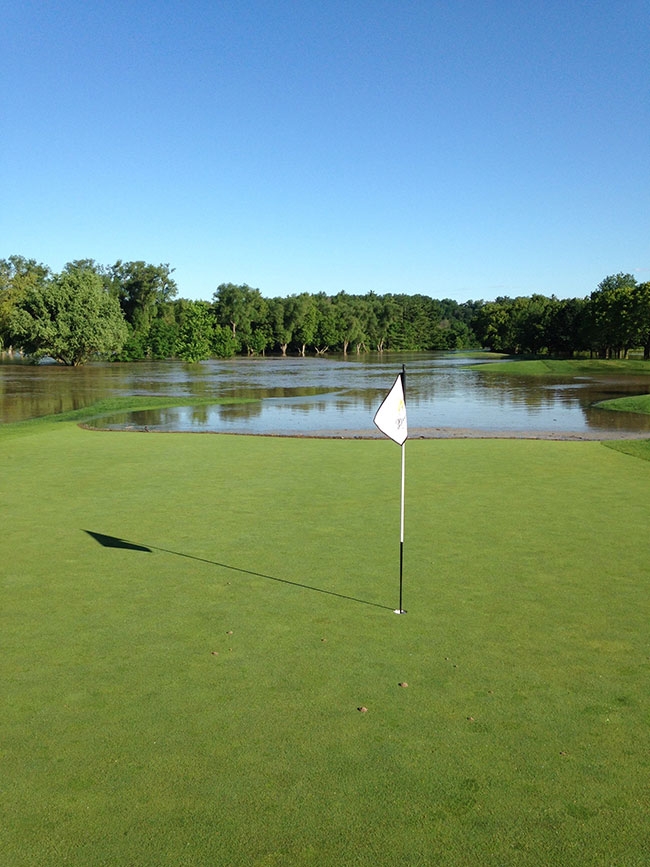 The flooded Grand River covers the fairway at the fourth hole, abutting the green.

As an outdoor sport, golf is at the mercy of Mother Nature. Rain, strong winds and even hail will have an impact on a golfer’s performance. Not only do extremes in weather make him feel personally uncomfortable and unable to perform at his best, the playability of the golf course itself is compromised.

To protect both players and the course from harm, golf courses enact a standard set of procedures in times of extreme weather conditions. In the event of lightning in the area, golfers are herded off the course and into a protective shelter. When a morning frost blankets much of the course, tee times are delayed to protect the turf from the damage caused by foot and cart traffic.

But sometimes an extreme weather event comes along that is completely unexpected and throws the entire golf course operation for a loop. Such was the case in June of 2017 at Kitchener, Ont.’s Deer Ridge Golf Club.

Shortly after successfully hosting the PGA of Canada’s national championship and initiating a post-tournament aerification program, Deer Ridge fell victim to a 100-year flood event. Speaking to his peers in January at the Ontario Golf Superintendents Association’s annual conference in Niagara Falls, course superintendent Jason Winter shared details of the flood damage and the subsequent restoration work involved. More importantly, he outlined Deer Ridge’s crisis management plan and how its lines of communication were especially instrumental in not only keeping members abreast of all developments, but in rounding up the assistance necessary for the cleanup and restorative processes.

“It’s a beautiful piece of property that’s surrounded by the Grand River,” Winter said of Deer Ridge’s valley setting. “You wouldn’t even know you’re in the city.”

The private golf course was one of architect Thomas McBroom’s earlier designs. When it was originally constructed, a hydraulic corridor was included as part of the project as a means of relieving pressure from the river during high-water events. It was speculated a corridor might be needed to contend with a rising river issue that might occur one day in the future.

“When you live on the river like I do, you’re very aware of how the river moves and responds to different rain events, and the GRCA (Grand River Conservation Authority) does a fabulous job of controlling the reservoirs and dams that make up that watershed.”

On the night of Friday, June 23, a former co-worker of Winter’s tweeted about a major storm system brewing in an area about 1½ hours north of Kitchener. Only a few millimetres of rain were falling at the time in the city, but Winter sensed something more extraordinary might be imminent. He conferred with the club’s general manager, recommending a precautionary eblast be sent to members to forewarn them of the possibility the golf course might be impacted.

An electronic message was immediately circulated that included some important statistical information. It was stated that a water volume of 400 cubic metres per second was enough for the river to spill its banks and impact the golf course. Winter once recalled experiencing a volume of 480 cubic metres per second that he thought was immense. At that volume, the ponds are at capacity and three or four of the holes become inaccessible. But he added such a volume was short-lived and the problem resolved itself relatively quickly.

’That’s a lot of water’
Throughout the evening of the 23rd, Winter monitored the volume which increased at a rate of about 40 cubic metres per second each hour, “and it just kept going and going.”

By the next morning, the volume of water reached 926 cubic metres per second.

Arriving at work before dawn on the 24th, his truck’s headlights were trained on the fifth hole, and all he could see was the sheen of a flooded fairway.

The volume of water was so abundant that only holes two, 15 and 18 weren’t flooded.

“It not only filled our hydraulic corridor, it did a lot of damage to the golf course.”

Winter said the most effective way to deal with the predicament was to have a communication plan in place, getting all of the facts, developing a crisis management plan, and working with insurers. He said that seeing such an alarming radar image upriver from a relatively short distance away was enough to get the process started. Thinking ahead of what might happen and what the club might be up against was key.

“I thought this is bigger than anything I’ve ever experienced before.”

While sitting in his truck and viewing the fifth hole – unable to see the full impact of the flood in the pre-dawn light – he began to consider what it was going to take to get the golf course back in shape.

The flooded Grand River covers the fairway at the fourth hole, abutting the green.

Those listening to Winter’s presentation at the OGSA conference watched a short video captured by a member-piloted drone that showed the impact of the flood on the property. The images were recorded four hours after the water’s peak.

Minutes after 5 o’clock on the morning of Saturday, June 24, an email message was sent to the board of directors so that key decisions could be rendered immediately. Winter also emailed colleagues at neighbouring golf courses along the Grand River, seeking their input. It was vital, he said, that communications kept members informed of the extent of the flooding and that there was no confusion. Other messages were sent by the professional staff at Deer Ridge to ensure everyone was kept abreast of all developments.

Winter assumed the role of “point person” in getting communications established before the club’s general manager carried on from there.

“Communication was frequent, it was consistent, it was realistic and also a bit empathetic because it was a traumatic experience for the members who couldn’t play golf.”

It was important to give members some reassurance that a plan was in place to get the golf course back in playing condition. Reciprocal playing arrangements were sought at other courses to accommodate the displaced members.

Winter said the forecast for the Kitchener area called for between five and 10 millimetres of rain on June 23, but only five millimetres fell at Deer Ridge. The majority of the rainfall occurred between 3 a.m. and 6 a.m. on June 24 at a point north in the watershed. About 38 millimetres of rain fell on June 18, rendering the soil incapable of absorbing much more.

Winter said he suspects the deluge of rain that led to the flood was the result of a cell that Environment Canada was unable to predict. It possibly grew faster to the west and was moving east when it became stationary, dumping a significant amount of precipitation into the Grand River watershed where it eventually reached Deer Ridge.

Largest rainfall since 1963
It was the largest volume of rainfall in the area since 1963 – the equivalent of 1½ months of rain in four hours. The rain covered about one-third of the watershed and was the highest estimated flow of water to come down the Grand River in 54 years. The Grand River watershed, at about 6,800 square kilometres, is the largest of its kind in southern Ontario.

Winter said the GRCA’s reservoirs, dams and other responsibilities provide for “a lot of moving parts. It’s in their (GRCA) best interests to manage that water as best they can.”

In all, 13 of 21 greens at Deer Ridge were partially or fully submerged as well as 11 fairways. Ten irrigation satellites were destroyed, several bunkers were damaged to various degrees, about 600 tons of bunker sand disappeared, and immense quantities of mulch were lost.

Winter said it’s important to have a crisis management plan in place because extreme weather situations are on the rise. In the event of a flood, it is imperative to keep everyone away from the water.

If it’s a case of extreme wind, safe structures must be identified. Fire or power outages need attention to ensure everyone is safe. Priority No. 1 in disaster situations is to make sure all club personnel are safe and accounted for, he said.

A meeting place should be arranged and an emergency protocol in place, Winter said, adding EMS personnel will need to be directed as to where they can enter the course, whether an injury is serious or not.

Having a supply of plywood on hand to be placed in sensitive areas of the course will allow access points for equipment without adding to the damage already present.

“You have to make sure you have the right equipment and materials for these types of events.”

On the evening of Friday, June 23, Winter was on the telephone with a supplier to get pumps procured. Priorities were established and contractors were reached.

“I wanted to keep it all in perspective. We had to put a plan together that wasn’t frantic or chaotic.”

Pumps were put into action moving water from areas obstructing the golf course while an army of volunteers helped clean up debris, including silt from the greens. In-play areas of the course were given preferential attention “because we had to start maintaining the property pretty much as soon as the water had receded.”

While Winter coordinated the planning process, his assistant Jake Martin was in charge of scheduling. About 80 individuals, including members, volunteers, Deer Ridge’s maintenance staff and others from neighbouring courses, were engaged in cleanup efforts. Several fish washed up onto the course during the flood.

The three holes that weren’t affected by the swollen waters still required daily maintenance during the cleanup process, and ways to access the holes needed to be devised.

“If we didn’t stay on top of the stuff we knew we could cut, we’d start falling behind because all our forces had to get set aside for the cleanup of the flood.”

Cleanup efforts began daily at 7:30 a.m. Volunteers were treated to buffet lunches and drinks, and a party was thrown afterwards to thank everyone for his or her efforts.

The entire cleanup process was documented through an abundance of photographs that chronicled everything, including electrical components, buildings, infrastructure, drainage, irrigation systems, bunker linings, cart paths and putting surfaces.

New irrigation satellites were installed within 19 days of the flood.

“Getting these back in place quickly was really important for us.”

Winter said the golf course had prepared an inventory sheet prior to the flood that documented every item that was supposed to be at each hole, including rakes and water coolers. All items collected during the cleanup process were placed in a common area to update the inventory count for insurance reasons.

Tests were conducted to see if the flood changed any of the characteristics of the golf course, including drainage, the physical identification of silt layers and permeability.

“We were lucky we didn’t lose any of the features themselves.”

To restore the golf course to the state it was in prior to the flood, various cultural practices were conducted, including verticutting, aerating, topdressing and punching through the surface to get at the silt on the property. Brushing was done to remove smaller debris once larger litter items were removed from fairways.

Winter said it’s important for a golf course to know the details of its insurance policy, understanding what is covered and for how much, if components of an irrigation system are covered and if other features such as retaining walls are covered.

“In the end you always need a great team, whether you’re managing a weather disaster like this or you’re just preparing your golf course every day. These are the people who make it happen.”

June 23, throughout the evening
Winter carefully monitors the weather