In many ways, the GTI’s move to the Arboretum has been a blessing in disguise 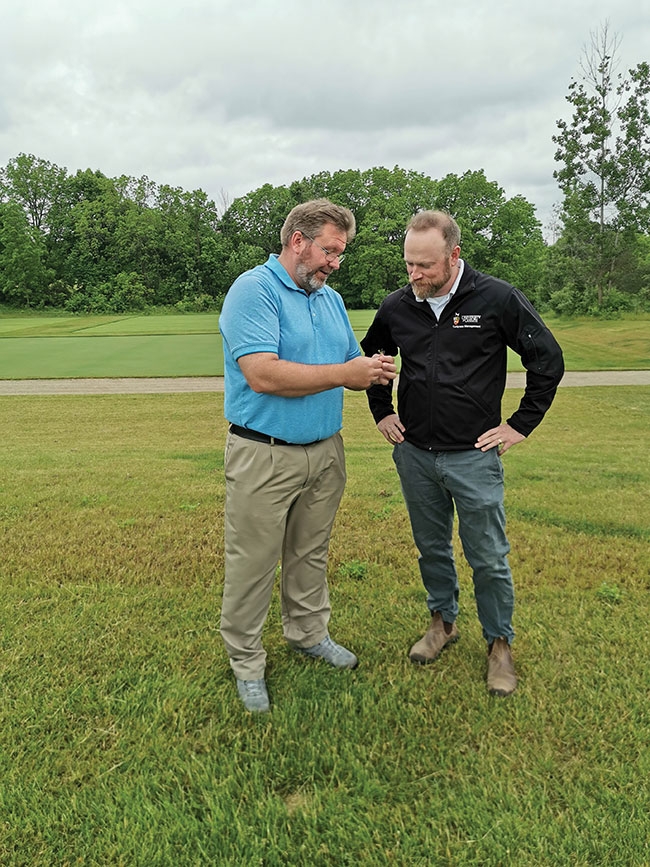 The writing was on the wall six years ago that the Guelph Turfgrass Institute would likely have to relocate from its longtime site on Victoria Road. Originally built in 1987, the GTI has served as arguably Canada’s foremost centre of turfgrass research.

The facility is located on Guelph Research Station land owned by the Ontario government. Although most of the city’s research stations are controlled by the Agricultural Research Institute of Ontario, jurisdiction of the Victoria Road site is given to the Ontario Realty Caorp.

“That generally means they’re looking to maximize provincial benefits from these lands,” Dr. Eric Lyons, director of the GTI said. “And they see that development is a natural benefit to these lands.”

Guelph has been recognized as a key place for population growth among urban neighbours of the Greater Toronto Area.

Lyons said there was always hope that the GTI’s lease would continue to be renewed and that the Guelph Research Station property would always be there in perpetuity, but it was clear a plan needed to be devised in the event renewal of the lease was to no longer happen.

A number of options were considered for the GTI’s new home, but it became clear that property at Guelph’s Arboretum was the best possible choice. In fact, the GTI’s new location couldn’t have been more practical or convenient. It’s closer to the University of Guelph campus, is next door to the Cutten Fields Golf Club and features trees and grasslands that emulate natural golf course and park characteristics.

In many ways, the GTI’s move to the Arboretum has been a blessing in disguise.

“It became clear very quickly that the home for the GTI was best served here on campus, and the reason for that is because if you’ve got faculty with offices and grad students with offices and labs here on the main campus, it doesn’t make sense to have their research field trials out in Elora (another relocation option) because it’s just inefficient,” Cam Shaw, communications and outreach co-ordinator for the GTI, said.

Lyons added that if he wanted to bring his second-year turf students to tour a particular trial plot, transportation needed to be organized to visit the Victoria Road property. At the Arboretum location, students can walk to the plots.

“One thing that was recognized is that the GTI is not just a research facility,” he said. “It’s a teaching facility. The connection the GTI has to the diploma program, the short course program and the undergraduate programs on campus is crucial, and we need to be here.”

The centre for teaching is a still-to-be-constructed new building designed to perfect on the current G.M. Frost Building at the Victoria Road site. The new facility will provide more office space for the GTI’s association partners, will feature a larger boardroom and will have two classrooms instead of the current single classroom. It will be built as a two-storey structure.

“The best part of the new building versus the current one is that the design makes a lot more sense,” Shaw said. “It’s a well-designed, well thought-out building that had stakeholder input meetings that went into it.”

Less-than-ideal teaching environment
Shaw said that when the turf manager’s short course was taught in February each year, the single-classroom setup at the original Frost building turned the environment into a “zoo,” with students creating noise issues for those working in adjacent offices. The boardroom and offices will be located on the second floor, comfortably away from the noise created by students coming and going on the ground floor. Not only has traffic control been addressed with the new building’s more efficient design and the doubling of classrooms, all rooms will feature full connectivity to accommodate better conference calls and video conferencing.

The extent of teaching tools at the current building consisted of a white board and projector screen, Lyons added.

Dedicated class space will soon be available to the diploma program, short course and other university classes such as environmental science.

The greater classroom space will provide better exposure to turf, Shaw said, noting that other groups of people who may not have given much thought to turf will have the opportunity to spend more time connecting with the subject and will have an advantageous learning experience at the GTI.

Plans are to have the new building ready by late fall of 2020.

The provincial government is footing 80 per cent of the GTI’s estimated $15-million relocation cost while the remainder will be left to the university and turf industry to fundraise.

“It will be the pre-eminent turf research facility around,” Lyons said.

The new site’s proximity to the university’s researchers is seen as a particular boon.

“Turf is not like corn, soybeans or wheat,” Lyons said. “So we need to be in closer proximity to the researchers in order to facilitate us being on campus with our students and being able to do research. Turf is a very unique research endeavour in that way.”

He said unlike agricultural research – which will have its busy days when various treatments are put on, not requiring the daily presence of researchers – turf plots are manipulated daily, and the absence of researchers on an ongoing basis could result in turf death.

One of the most significant blessings in disguise associated with the GTI’s relocation is the partnership and ongoing synergy with Cutten Fields, Lyons said.

“They’ve been invaluable during this process. Cutten Fields has always been a great supporter of turf research and the endeavour because they see it. They’re right here on campus.”

Cutten Fields’ maintenance staff grew in the golf research plots at the Arboretum location. Plugs taken from the golf course were used for the pushup plots at the west end of the research area.

Lyons said the synergy the GTI has with Cutten Fields allows the institute as a teaching facility to say to turf students, “Let’s walk off the research plot where research is done and the data you learned about is created and go over to this golf green right across the fence line and talk about what’s different between where we did the research versus where the research is implemented and why there could be flaws in that research.”

The move to the Arboretum property hasn’t cost the GTI anything in terms of research plot space, with both sites having upwards of six acres of research ranges. One of the drawbacks associated with the relocation, Lyons admitted, will be the eventual loss of historical infrastructure at the Victoria Road site. One research plot he cited is the heavily thatched green that won’t be part of the new facility unless one of the new grown-in greens is purposely allowed to develop excess thatch.

But there are plenty of advantages associated with the GTI’s new location, he added. The biggest, perhaps, is the construction of the different classifications of sports fields. Since the construction of the original GTI, Sports Turf Canada has created a classification system for sports fields with numerical category designations of one through four. The sports field plots represent the typical portfolio of playing fields maintained by municipalities, ranging from those built of 100 per cent sand to fields that are more than 50 per cent silt and clay.

One of the sports field plots is situated against a massive slope, enabling research to be done on the fate of pesticides and nutrients leaching down slopes and providing data about the important role turfgrass plays in runoff situations.

The GTI’s goal is to be fully moved into its new site by the fall of 2020.

“We know we’ll be here (at the original location) next season, doing research on both sites,” Lyons said. “When we knew we were moving, there was an insistence upon the researchers that there would be significant overlap between the two sites. It looks like we’ll have two years of overlap.”

The unusually cool, wet spring this year has had a negative impact on work initiated last fall. Bluegrass seeded in the fall should ordinarily be fully grown in by now, but only a 67 per cent catch has been realized. A cultivar trial seeded in the fall saw only a 35 to 40 per cent fill-in in June among slower growing cultivars that are stress tolerant. The seeding had an ideal take in the fall when conditions were optimal, but below average spring soil temperatures stumped growth.

A tall fescue cultivar trial was planned for the new site in the spring, but poor growing conditions prevented plots from being seeded.

“If we had seeded it first thing in the spring, it never would have germinated because it needs heat to germinate,” Lyons said.

He said there is no dependence yet on the new site because it’s in a transition phase, noting that it isn’t the end of the world that the trial has been delayed.

The cool spring also affected a Turfgrass Water Conservation Alliance Kentucky bluegrass cultivar trial that had yet to fill in by June. A solid start was realized at the outset, but no progress had been made late in June.

Shaw said the cool spring has produced an important take-home message to those who have toured the plots to suggest that the growth that was hoped for but not realized can also happen at golf courses.

“Kentucky bluegrasses just do not do well in the spring, and it hasn’t been a favourable spring, so you may be able to communicate that a bit better,” he said.

Because the research plots were put in first before construction began on the new Frost building, research and teaching endeavours won’t suffer due to any delays with the building’s construction because of the transition period.