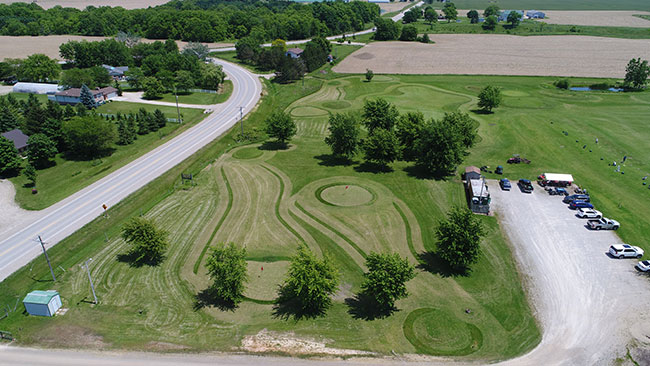 Tucked away in a rural setting outside Strathroy, Ont. – “in the middle of nowhere,” as its owner quips – is a one-of-a-kind golf jewel that, since the COVID-19 pandemic began, has been busier than ever.

The Peter Boyce Golf Academy & Driving Range has proven to be a popular destination for those wishing to learn to play the game, hone their short-game skills or get in a warm-up session on their way to a round at a nearby golf course.

The 2021 season marked the first year for two of the new greens while the others opened for play this year. Boyce, a life member of the Canadian Professional Golfers’ Association, said the first pair of greens are currently “very cuttable” while the others – as of early July – “are starting to fill in now.”

Aerated and topdressed, the putting surfaces were seeded with three separate applications of bentgrass over a period of a month and a half and irrigated “with as much water as possible.” Plans were to overseed once more this fall.

The mini course greens are mowed to a height comparable to those at other golf courses but feature little or no contours. This was done by design to allow beginning golfers to learn to putt on a relatively flat surface without the burden of having to read undulations.

Boyce said he wishes to grow the game, knowing how frustrating it can be for beginners who could be presented with too much on their plate at the outset.

The intricacies of the game can sometimes be overwhelming at times for even the most seasoned golfers which inspired Boyce to simplify things as best as possible for the sake of young children and newcomers to the game. For example, the longest hole at the short six-hole course (12 for those who wish to play it twice) is 185 yards. The others range in length from 50 to 90 yards. Youngsters who play their first round of golf at a full-length championship course may be faced with an opening hole that is 400 or more yards long, creating a scenario that can easily frustrate them and turn them away from golf after they’ve scarcely begun.

“It takes young kids 20 shots to get there,” Boyce said. “This is a lot better and gives them a better idea of what golf will be.”

The shorter hole lengths are also conducive to the more experienced golfer who may wish to play six or 12 holes to simply dial in his short game by hitting from typical approach shot distances.

Positive feedback from golfers
Boyce has received plenty of positive feedback about his facility, especially with the addition of the new mini course practice holes. He’s been told it’s the best place to hit, chip and putt balls. 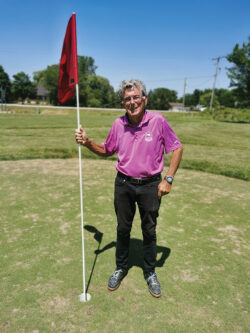 Prior to the construction of the academy facility, the property had previous served as farmland with a private airstrip. About 70 per cent of the land makes up the driving range while the remaining property serves as the short practice course.

Boyce’s background as a golf professional has been largely dedicated to providing instruction to beginning golfers and helping fine tune experienced players’ games. Although his knowledge of turfgrass management is better than average, he occasionally relies on the expertise of Arkona Fairways’ superintendent Tim Hornick on more complex matters.

“He’s here all the time,” Boyce said. “He does the sharpening for some of our mowers.”

Hornick provides advice on turf-related issues when they are beyond Boyce’s scope.

Fertilizer and water are generally the facility’s only inputs but spraying for dollar spot is otherwise done on a regular basis.

All greens and tees on the practice course are irrigated. A Jacobsen greens mower and gang mower are used for cutting. Looking after the day-to-day maintenance is Joe Couto, who is at the course “all the time.”

The facility’s clay soil allows turf to green up quickly and stay green. Water is pumped daily from a well into an irrigation pond that was dug out in the summer of 1998. The excavated material was used to build up tees and mounds.

During the COVID-19 pandemic, golf experienced a revival in most places in Canada, and the Peter Boyce Golf Academy & Driving Range was no different. Boyce said revenue virtually tripled during that time when many other recreational pursuits were shut down.

“Since COVID hit, the number of adults and kids has really been noticeable.”

Tees are full on most nights with a mix of clients of varying skill levels.

Youngsters can play the practice course at no charge while adults are asked to contribute a couple of dollars into an honour box, although the premises are video monitored. Proceeds are donated to charity.