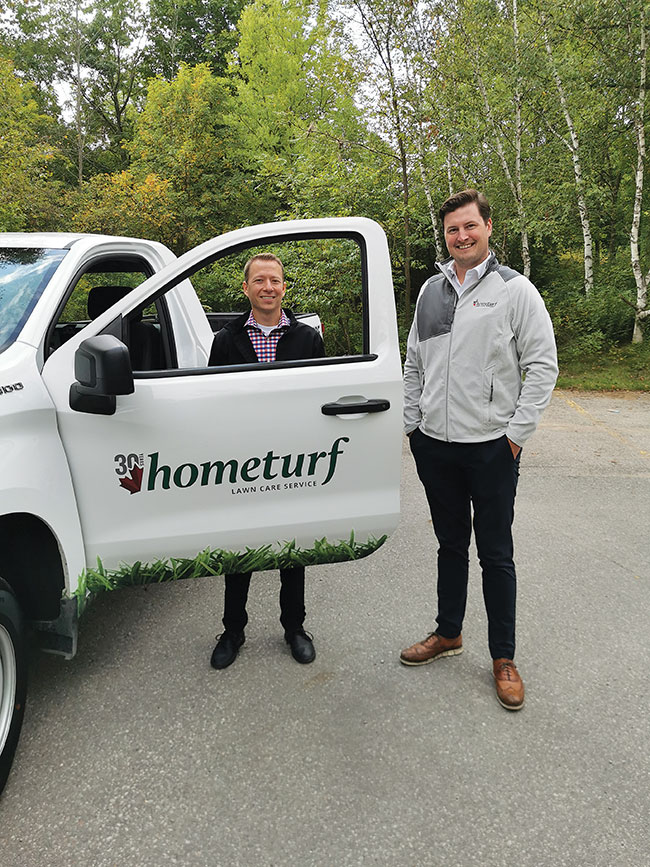 Matt Hooper, right, is picking up where Joel Van Haastrecht left off as president of Hometurf Lawn Care in Mississauga, Ont.

Mississauga-based Hometurf Lawn Care has been in the Van Haastrecht family since the business’ inception more than 30 years ago, having been presided over by two generations of the family. Founded in 1988 by Bruce and Debbie Van Haastrecht, the continually-growing lawn care business was passed on to son Joel, who served as its president the past several years.

Now, taking over the reigns as company president is British Columbia native Matt Hooper who heads a group of investors that found the independent lawn care business to be a perfect fit for their long-term vision.

Hooper and Van Haastrecht met during the summer of 2019, but began formal discussions about Hometurf’s future during the winter months.

“The more we talked about it, the more it seemed like a good fit and for what Joel was looking to do long-term for himself and his family,” Hooper said.

The past year was spent discussing details surrounding the business’ transfer while the coming year will see the two working together to achieve a smooth transition.

“For the next year, we’ll be working hand in hand, and after that I’ll be an active board member so that I can continue to advise Matt,” Van Haastrect said. “He’s really gotten to know the business well prior to taking on this role.”

Hooper grew up on an apple orchard in the Okanagan Valley and brings a general business background to the table. He came to Ontario to pursue his MBA at Queen’s University in Kingston and then spent a couple of years in Prague, Czech Republic immediately afterward. Returning to Ontario in 2012, he embarked on a management consulting career for the next seven to eight years.

“I got a fairly broad experience working across a number of different industries, and then decided I didn’t want to be a consultant for the rest of my life. I really wanted to invest my time in a project that would allow me to see more of a long-term return for my efforts as opposed to going from one project to one company to the next. I’ve always had an entrepreneurial spirit and wanted an equity stake in a company and be able to grow it and be able to see the value, not only for myself but also watching that company grow and continue to support its employees in the community they exist in.”

Company’s core values
What attracted Hooper to Hometurf was its set of core values, its people and its products, he said, acknowledging the company has been growing at a strong and consistent rate, especially over the past 10 years.

“It fundamentally met all the characteristics we were looking for in a business, and the more I got to know Joel the more it seemed like a good fit for myself and for what he was looking to do in terms of succession planning and transition.”

Hooper said he’s already taken it upon himself to learn as much as possible about the lawn care industry and has enrolled in the coming turfgrass managers’ short course at the University of Guelph. He said the off-season is an ideal time “to get up to speed” on the industry and its trends and to learn more about Hometurf’s choice of products and the services it offers its customers.

Hometurf was originally founded in Brampton, where Van Haastrecht’s parents were living at the time. Head office eventually relocated to Mississauga, and regional offices were later established in Guelph and Calgary.

“The vision for the business was always growth,” Van Haastrecht said, adding he believes Hometurf might be Canada’s largest independently-owned lawn care company. “We’ve taken a lot of market share in the last 10 years and have grown quite substantially.”

At its outset in the late 1980s, starting with a small customer base, Hometurf built decks and fences to supplement its revenue stream. Once the business began to grow, it expanded from Brampton into Mississauga and Burlington and then into the Greater Toronto Area.

“In 2010, we made another really big move and moved to regions outside the GTA as well as Calgary, and we continued to grow within those regions and added other areas,” Van Haastrecht said.

The decision to take Hometurf outside of Ontario was made in 2009, coming after the implementation of Ontario’s cosmetic pesticide ban.

“We always wanted to open a regional office. In our business, we need a density of homes in order to be efficient and effective.” Van Haastrecht said that outside of the GTA, Calgary was the next Canadian city with the desired density. “At the time, there was the fear of what that ban was going to do to our industry, and Alberta was still allowing traditional pesticide use. It was a good place to diversify and still be able to work with those products as we saw fit, and it had all the right attributes for a successful regional operation.”

“I was looking to invest in a small business in Canada and I met Joel and learned more about the Hometurf story and his family story,” new Hometurf Lawn Care president Matt Hooper said.

“It’s great to have someone who wants to be as actively involved,” Joel Van Haastrecht said of his successor, Matt Hooper, Hometurf Lawn Care’s new president.

With its seasonal and full-time staff, Hometurf employs about 100 people. Its primary services include fertilization, weed control, aeration and overseeding for a residential customer base.

Van Haastrecht said Hometurf was prepared for the cosmetic pesticide ban that was enacted in Ontario in 2009. Prior to the province-wide legislation, individual municipalities were already introducing bans and restrictions of their own.

“We were very involved in keeping up to date with what was happening and focusing on next steps,” he said.

In the first year of the ban, Fiesta had yet to hit the commercial lawn care market, prompting some anxiety within his company and the industry in general. Another government-approved replacement product for 2,4-D was available, but Van Haastrecht said he found it to be ineffective.

“During the one-year period between the ban’s start and the creation of Fiesta, we actually pulled weeds, which was quite onerous and labour-intensive, but it kept our customers satisfied.”

Van Haastrecht said Hometurf was one of the first lawn care companies to adopt Fiesta once it became available. “We took hold of it and worked with it right away throughout 2010. It was really a saving grace for us.”

Hometurf’s focus has always centred around conservation, Van Haastrecht said, noting that proper fertilization and seeding not only grows grass, but battles weeds and contributes to a healthier soil.

“The more grass you have, the less weeds you’ll have.”

Liquid aeration
When the COVID-19 pandemic hit in the spring, Van Haastrecht said Hometurf had to make adjustments to its aeration service for safety reasons. Previously, two technicians worked together when aerating a customer’s lawn, but both people riding in the same vehicle was no longer feasible. Speaking with industry suppliers and other professionals, it was learned that liquid aeration was an effective measure that could be practised by only one person.

“Once COVID hit, we needed a solution to still provide that aeration and not jeopardize the safety of our staff,” Van Haastrecht said, adding conventional core aeration was off the table this year.

He said he was skeptical at first about a liquid alternative to conventional aeration, “but I’m genuinely surprised and extremely satisfied with the results, as are our customers and technical staff. Not only is it easier for our technicians to apply, it really has a beneficial effect on the turf.”

Other lawn care companies that have been offering liquid aeration services have since sold off their aerating equipment, he said, adding other benefits of liquid aeration include not having to mark off sprinkler heads on installed irrigation systems and not having cores lying on the surface.

The process of delivering liquid aeration versus core aeration takes about the same amount of time, Van Haastrecht said. Once the current pandemic has run its course, both aeration options will likely be offered to Hometurf’s customers, but both methods will be monitored to determine if it’s better to invest in one option over the other.

Operating under the cloud of COVID-19 this year presented itself as a challenge at first, but Van Haastrecht said the company was able to adapt and continue to satisfy its customers.

“It smacked you in the face at first, but we’re fortunate that we work outside with generally one technician per service vehicle.”

Office staff successfully transitioned into working from home, and it’s since been mostly business as usual, he added. Government restrictions in the early spring forced a later-than-usual start to the season, but customers were largely sympathetic to the lawn care business’ limitations.

“Folks were pretty understanding of that,” Hooper said. “Joel and the team of managers did a really exceptional job. Once we were legally able to get out on the lawns and it was safe to do it for our technicians, we were able to put in the extra time to catch up as quickly as possible and get our spring work done in fairly short order.”

Efforts were made to get as much done in the summer and fall in order to stay ahead of the work required in the event of a possible government-mandated setback.

“We’re in a position where we feel comfortable we can complete the season for our customers ahead of schedule,” Hooper said, adding he’s excited about the 2021 season. “Even if it’s a challenging scenario again with COVID that will be in place, we have learned how to adapt our processes and systems in the way we operate to support that in doing it in a safe way.

“What you’re starting to see is that as people restructure their lives and spend a lot more time at their homes, the way that folks are gathering has changed fundamentally. People used to spend a lot more time gathering at restaurants or museums or whatever the case might be, but they can’t do that anymore. Yet people still crave some form of social interaction, getting families together and getting kids together, and we’re starting to see this massive shift. The front yard has become an entertainment zone and you’re seeing families coming from down the street and they’re setting up in the front yard while other folks are on their deck talking and sharing a laugh, and that puts more of an emphasis on the health and beauty of their properties and outdoor spaces. I think there’s going to be more emphasis on the quality of folks’ lawns.”

Hooper’s excitement about 2021 has already had a head start. In mid-September, the new Hometurf president was actively working hands-on on customers’ properties.

“It’s great to have someone who wants to be as actively involved,” Van Haastrecht said.