MEMBERS at Kitchener, Ont.’s Deer Ridge Golf Club will be putting on 18
“new” greens in June when the private course reopens for play after a
shutdown of several months.

The club, which is celebrating its 20th season of play this year, began an extensive renovation project late last season which not only involved a complete makeover of each of its greens, but a redoing of its array of greenside bunkers and the construction of some new back tees, lengthening its layout to almost 7,300 yards. 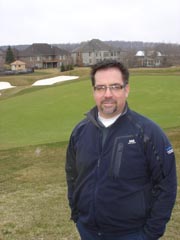 Overseeing the nearly $2-million project was superintendent Jason Winter, who now has four different golf course renovation projects under his belt. He said the original greens at Deer Ridge had become so infested with poa annua over the past two decades that it was becoming increasingly more difficult for them to survive the winters.

“The biggest problem was every year we had dead turf in the spring,” he said. “That was a result of a green site that had poor surface drainage, and the fact that we had poa on the greens made it just so susceptible to winter damage.”

The winter of 2009-2010 was particularly bad, Winter said, but the club had already made up its mind following the 2009 golf season that it was finally time to put an end to the problem.

Instead of simply killing off the poa annua and seeding it over with bentgrass, the club went one step further and completely stripped each of the greens under the direction of original architect Tom McBroom.

The project got underway last Aug. 23 with the first nine holes, and the balance of the work began Sept. 20 when the remaining nine holes were shut down. By Nov. 1, all greens complexes had been rebuilt and sodded.

Deer Ridge boasts a high percentage of low handicap golfers among its approximately 400 members, and consistent green speeds were demanded. Depending on the amount of poa annua found in the pre-renovated putting surfaces, ball speeds could vary from green to green.

The club opted to go the extra mile to ensure the greens were given top-to-bottom treatment for the sake of their long-term betterment. Prior to the project getting underway, sod was custom grown at Compact Sod. Aggressor Pro, a Pickseed product which is a 50-50 blend of Tyee and MacKenzie bentgrass varieties, was chosen due to its fine leaf texture, tolerance to summer stress, disease resistance and uniformity.

Construction of the greens was done by Evans Golf. Although the surfaces were completely rebuilt from the bottom up according to USGA specifications, McBroom did not wish to alter their original shape in any way other than to ensure they were provided with a two per cent slope to ensure optimum surface drainage.

Irrigation was upgraded around the greens, giving each sprinkler head individual control.

“We had some specific parameters we wanted this root zone to meet because we wanted it to be quickly draining,” Winter said. “Because of the calibre of our membership, we wanted them to be firm and fast. We focused on a specific porosity so that we had a high percentage of air and capillary pores in that root zone.”

About 6,000 tons of mix was supplied by Hutcheson, requiring 240 semi truckloads for delivery.
As part of the project, all greens were mapped to determine problem areas for surface drainage.
Winter said several locations had a tendency to hold water. With McBroom’s want of a two per cent slope on every green to address the surface drainage, a fitness test was also conducted on existing drainage prior to the greens’ reconstruction to ensure all drain lines were working efficiently. Those which weren’t were replaced while additional drainage was provided where needed.

Some green sites had experienced shade issues prior to the renovation work. Smith and Steve Mann of SJM Arboriculture put together a shade study, recommending the removal of some trees to allow adequate sunlight to reach the putting surfaces.

Winter said tree removal is always a sensitive topic of discussion among a golf club’s membership as well as local agencies which must grant the necessary permits. He said the club will compensate for the removal of trees by planting new ones elsewhere on the property.

McBroom’s master plan called for material excavated from the greens cavities to be used in the construction of new back tees as well as edging for its network of cart paths.

“We found a home for pretty much everything,” Winter said.

Much of the golf course is positioned in a peninsula-type setting, bordered by the Grand River. This required a hydraulic corridor study to be conducted to ensure the new tees wouldn’t adversely impact the dynamics of the river which is known to swell during peak flow.

In addition to a complete overhaul of Deer Ridge’s greens, all 36 greenside bunkers were stripped of their sand and redone.

“The sand in these bunkers was inconsistent,” Winter said. “There was some original sand from the original construction…some Pro Angle, some Temisca…just a hodgepodge of sands.”

Deer Ridge opted for Tour Grade Signature sand to fill the bunkers. The product, supplied by Fairmount Minerals of Hamilton, has many qualities, Winter said, adding it is resistant to “fried egg” lies, has superior holding ability and has a lesser propensity to washouts.

A total of 850 tons of sand were used for the greenside bunkers.

In keeping with the desire to recycle old material, the excavated bunker sand was used to bed the pipe for the irrigation system upgrade.

“The thing that made this project so successful was that we limited where we moved our materials. We tried to do things where for each phase of the project we were able to use something from within that area. Instead of bringing in sand to bed the irrigation pipe, we used the bunker sand out of the old bunkers.”

Once the bunker cavities were exposed, they were identified for any shortcomings in drainage capacity.
In situations when McBroom wasn’t physically present to make on-the-spot judgment calls in the event of an unexpected issue, Winter was usually entrusted to make decisions after consulting with the architect.

“The project was well planned and we had a clearly defined scope,” Winter said, adding if his decision was required in McBroom’s absence, 99 per cent of the time they were in agreement with one another.
Throughout the duration of the nine-week project, Winter’s staff continued with ongoing course maintenance work while the Evans Golf crew were dedicated to the renovations.

“Evans did an outstanding job for us. It was a great decision for the club to go with them.”

The club was equally thrilled with McBroom’s direction and contribution to the project.

Since the completion of the project, Winter said there have been no concerns or setbacks in spite of the river’s water levels rising higher than average this year.

He said the newly-renovated greens emerged from the 2010-2011 winter exceptionally well. Reopening the golf course for its traditional April start was a little too premature, however.

“There’s a maturation that has to happen,” Winter said, noting it was important to see how the greens first responded to mowing, topdressing and other agronomic practices. “We want to make sure the turf is able to handle that before we open. The biggest mistake we can make is opening too early.”

The past winter was a longer, more severe winter than those experienced in recent years. By contrast, mowing had begun last year at Deer Ridge by March 17, and its irrigation system was up and running by April 1.

Winter, who began work at Deer Ridge in October 2009 after serving four years as superintendent at Minett, Ont.’s The Rock, said his first winter in Kitchener underscored the need for a complete greens renovation. During that season, the predominantly poa greens were approaching 40 to 50 days of ice cover which was getting dangerously close to kill thresholds.

His staff aerified to help break up the ice. Greens were tarped, the ice was fractured, and black sand topdressing was put down.

“This was the kind of stuff that was happening every year. The greens weren’t draining so they were just sitting in ice and it was suffocating that poa.”

Winter said it was “unsettling” for him to see so much winter kill after only his first four months on the job.

One green which had been sodded to bentgrass a year earlier was also covered in ice, but had overwintered much better than its poa counterparts.

The greens had less than a one per cent slope prior to their reconstruction which left them vulnerable to surface water retention and potential ice damage.

Fairway bunkers were left untouched during the renovation project, but Winter speculated they will soon receive a makeover of their own, perhaps as early as next year, although exact timing remains unclear. Some may require repositioning due to the construction of newer back tees.

A part of McBroom’s master plan, Winter said the architect wanted to add some bentgrass collection areas on some greens sites which would give golfers more shot options. Previously, a golfer was either on the putting surface or hitting a high, lofted shot from the Kentucky bluegrass surround. The new collection areas, which are almost an extension of the greens themselves, give golfers the option of hitting a bump-and-run shot toward the hole or the chance to putt from off the green.

Winter said the recent improvements are likely to aid Deer Ridge in “getting back on the radar again” in terms of its national ranking. With its longer, more competitive length, the golf course may be poised as the potential host for a high-calibre tournament.

“I think the club is starting to get toward having an event like that, just for a little visibility,” he said, adding the Ontario PGA has recently been in contact with Deer Ridge. “It gives the golf course some teeth. It brings it to a level where if they want to host something, then they’re able to do that now.”
Aside from his tenure at The Rock, Winter had previously worked at the exclusive Redtail Golf Course near St. Thomas, Ont. and in the United States for several years.

The Penn State University graduate said his current occupation has left him with little time for any rest and relaxation.